Netanyahu pushes Pompeo for more pressure on Iran in Portugal 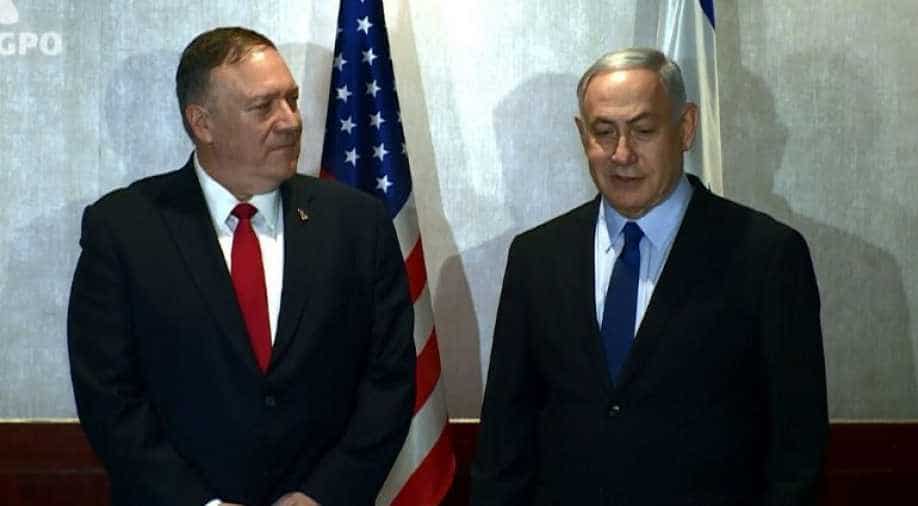 Israeli Prime Minister Benjamin Netanyahu met US Secretary of State Mike Pompeo in Portugal on Wednesday and called for increased pressure on the "tottering" Iranian government.

"I think we have been fortunate that President Trump has led a consistent policy of pressure against Iran. Iran’s aggression is growing, but its empire is tottering," Netanyahu said in Lisbon.

"And I say, let’s make it totter even further," he added.

Netanyahu stressed that Iran was the main subject of his meeting with Pompeo, adding "the second subject is Iran, and so is the third".

Pompeo, in a tweet, said it had been a "productive meeting".

"We discussed efforts to counter Iran’s destabilizing influence in the region, the importance of economic cooperation with regional partners and other issues related to Israel’s security," he added.

Israel, which is widely believed to have the Middle East's sole but undeclared nuclear arsenal, has for years accused Iran of seeking to obtain nuclear weapons and strongly opposed a 2015 agreement designed to address the concerns of major powers.

Trump, a strong Netanyahu ally, unilaterally pulled the United States out of the deal in May last year and reimposed crippling sanctions.

Netanyahu, who is fighting for his political life after an indictment on graft charges, has hailed the Trump sanctions.

Lebanon and Iraq, both countries where Iran has significant influence, have also seen major demonstrations.

Netanyahu criticised European governments that have signed up to a barter system that would allow Iran to trade without fear of US sanctions.

Six new European countries agreed to support the Instex system and Netanyahu said that "instead of supporting American sanctions, they are weakening them. That's not right.

"They should be ashamed of themselves. While people are risking their lives and dying on the streets of Tehran, they are giving sustenance and support to this tyrannical regime," he said before meeting with Pompeo.

Netanyahu, who was last month indicted on a variety of graft charges and faces a third election within a year after deadlocked polls in April and September, has been bolstered by a number of landmark steps taken by Trump.

He is Israel's longest-serving prime minister but he is serving in a caretaker capacity after the inconclusive elections.

Wednesday's meeting was the first between the two men since Pompeo announced last month that the United States no longer considered Jewish settlements in the West Bank to be illegal.

The announcement broke with decades of international consensus that the settlements are illegal and a major barrier to peace with the Palestinians.

The US position offered a boost to Netanyahu as he threatens to annex much of the West Bank, a step that would severely impede the long-held Palestinian hope for a separate state.

More than 600,000 Israelis live in settlements in the occupied West Bank and East Jerusalem, alongside around three million Palestinians.

Among previous steps, Trump earlier recognised bitterly contested Jerusalem as Israel's capital and cut off US funding for the UN body that supports Palestinian refugees.

Pompeo is due to meet his Portuguese Prime Minister Antonio Costa and Foreign Minister Augusto Santos Silva before flying on to Morocco on Thursday.