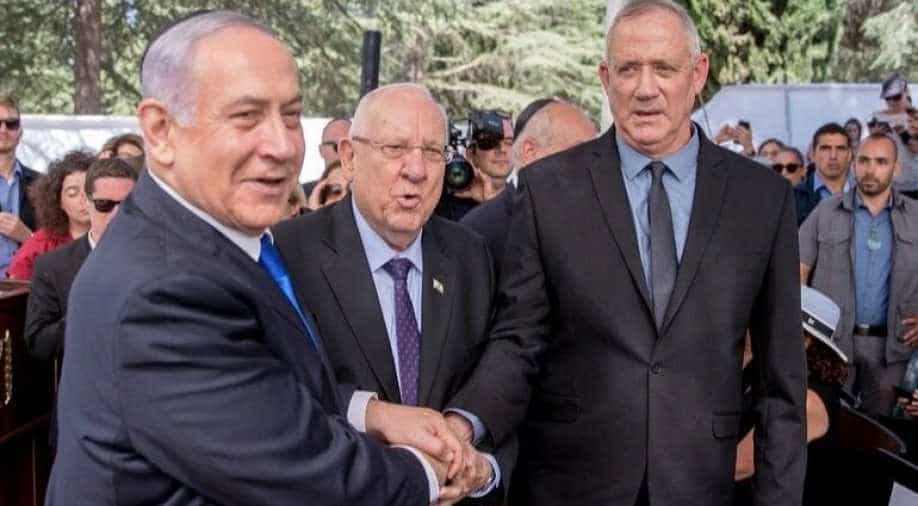 Gantz's centrist Blue and White and Netanyahu's right-wing Likud have started talks on forming a unity government, but they appear far apart on a range of issues, including who will lead it.

Israel's president meets Prime Minister Benjamin Netanyahu and his challenger Benny Gantz on Wednesday as the clock began ticking on a one-week deadline for him to name someone to form a government.

He could name someone to try to form a coalition as early as Wednesday, and speculation has run rampant over whether he will do so or wait until after the Jewish holiday of Rosh Hashanah, which falls on Monday and Tuesday.

In either case, the person selected will face what could turn out to be an impossible mission: forming a governing coalition when neither man has a clear path to a majority.

Gantz's centrist Blue and White and Netanyahu's right-wing Likud have started talks on forming a unity government, but they appear far apart on a range of issues, including who will lead it.

etanyahu is Israel's longest-serving prime minister and has shown no sign of willingly giving up the post he has held for a total of more than 13 years.

Wednesday night's meeting with Rivlin, Netanyahu and Gantz will be their second since the election, and the president has repeatedly made clear he would like to see both of their parties in a unity government.

He has pledged to do all he can to avoid yet another election -- which would be the third in a year's time after April polls also ended inconclusively.

"While the elections highlighted the divisions within Israeli society -- Jewish and Arab, religious and secular -- it is now time to work together on building a shared vision for our common future," Rivlin said at a Wednesday reception for foreign diplomats marking the Jewish new year.

"I therefore believe that the right path for the state of Israel today is to build as broad a governing coalition as possible."

A rotation arrangement has been floated, but the question of who would be premier first remains a major stumbling block.

Chief negotiators for Likud and Blue and White met Tuesday, but emerged afterward with only vague statements.

The timing in a rotation agreement is especially important for Netanyahu, who is facing possible corruption charges in the weeks ahead pending a hearing set for early October.

A prime minister does not have to step down if indicted -- only if convicted with all appeals exhausted -- while other ministers can be forced to do so when charged.

Blue and White remains the largest party with 33 seats, ahead of Likud's 32 out of parliament's 120.

Israel's Arab parties, running together under the Joint List alliance, finished as the third-largest force in parliament with 13 seats.

Netanyahu has highlighted the fact that he has more support from smaller parties in parliament -- giving him a total of 55 seats backing him -- and pledged not to abandon them in a coalition deal.

Gantz says his party is the largest and he should be in the lead.

The timing of Rivlin's announcement on his selection for who should try to form a government may depend on the progress of negotiations between the Likud and Blue and White.

The person chosen would then have 28 days to form a government, with a possible two-week extension.