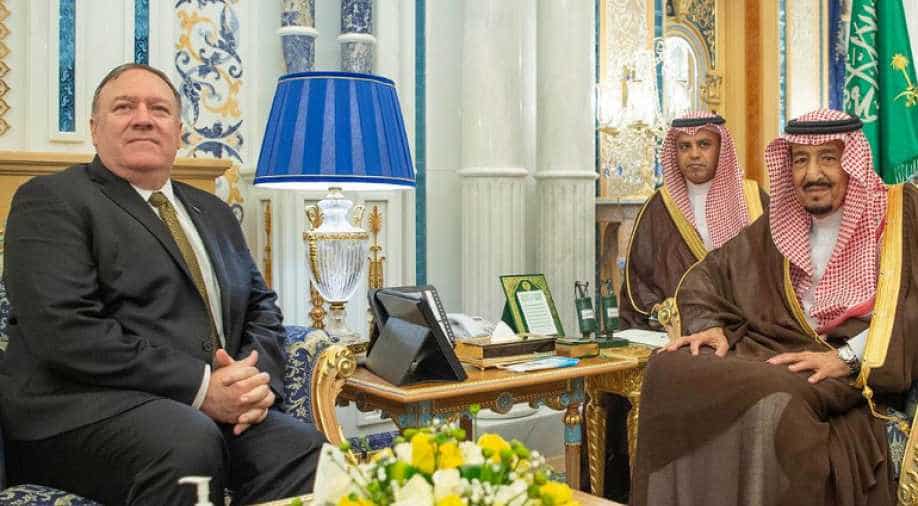 Pompeo will be travelling to UAE next as tensions between US and Iran continues unabated.

After meeting King Salman bin Abdulaziz today, US secretary of state Mike Pompeo said he discussed heightened tensions in the region after Iran brought down a US surveillance drone.

Pompeo said he also discussed the "need to promote maritime security in the Strait of Hormuz".

"Freedom of navigation is tantamount," he said in a tweet after meeting King Salman bin Abdulaziz.

Pompeo will be travelling to UAE next as tensions between US and Iran continues unabated. Pompeo had said that he would be taking to American allies in the region on the need to stay "strategically aligned" and to ensure "we can build out a global coalition".

As tensions in the region continued, the US imposed additional sanctions on Iran on Monday. However, Iran's foreign ministry said the new sanctions would have "no impact".

"We really do not know what (the new sanctions) are and what they want to target anymore, and also do not consider them to have any impact," ministry spokesman Abbas Mousavi said.

While imposing the sanctions, Trump said: "I look forward to the day that Sanctions come off Iran, and they become a productive and prosperous nation again - the sooner the better!"

Amid the crisis, US media on Saturday had reported that Washington had launched cyber attacks against Iranian missile control systems and a spy network after Tehran downed an American surveillance drone.

However, Iran said no cyber attack had taken place.

"The media are asking about the veracity of the alleged cyber attack against Iran. No successful attack has been carried out by them, although they are making a lot of effort," telecommunications minister Mohammad Javad Azari Jahromi said.