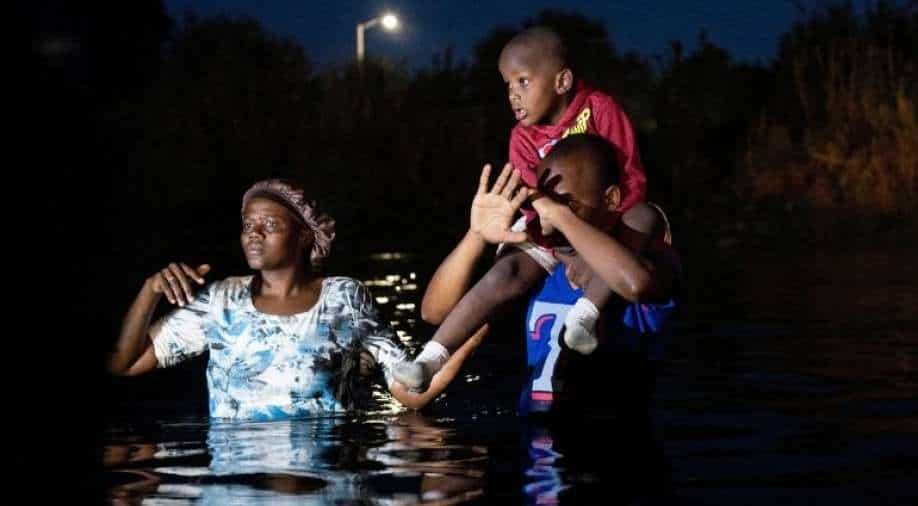 Migrants seeking asylum in the US cross the Rio Grande river into the US after leaving a makeshift migrant camp in Braulio Fernandez Ecological Park in Ciudad Acuna, Mexico, September 23, 2021. Photograph:( Reuters )

Republican Party pounced at the numbers to lash at Democratic President Joe Biden and VP Kamala Harris. It alleged that a "historic humanitarian crisis" had been created

Official figures in US showed on Monday that about 180,000 migrants were apprehended while attempting to enter the US from Mexico in December. These detentions brought total number of these detentions to almost 2 million. This is a record.

"On their watch, cartels and smugglers are thriving, border officials are overwhelmed, our communities are less safe," said Republican National Committee chairwoman Ronna McDaniel in a statement.

Migrant arrivals to the United States declined markedly during the initial phase of the Covid-19 pandemic but began to pick up later in 2020, before surging since President Joe Biden took office in January last year.

His arrival in the White House, with a promise of a more humane approach towards migrants, led to an increase in flows of undocumented foreigners fleeing poverty and violence.

Figures over the summer demonstrated a deviation from seasonal trends.

Punishingly hot summer weather usually sees the number of migrants attempting to cross decrease but the US Department of Homeland Security said an "unprecedented" number of migrants -- around 200,000 -- were intercepted illegally crossing the US-Mexico border in July.

The arrivals pose a considerable human, logistical and financial challenge to the Democratic administration, particularly as it has pledged not to turn back unaccompanied minors.

Its efforts to overhaul the migration system have stalled in Congress, and the issue is expected to be a major issue in the midterm elections in November.