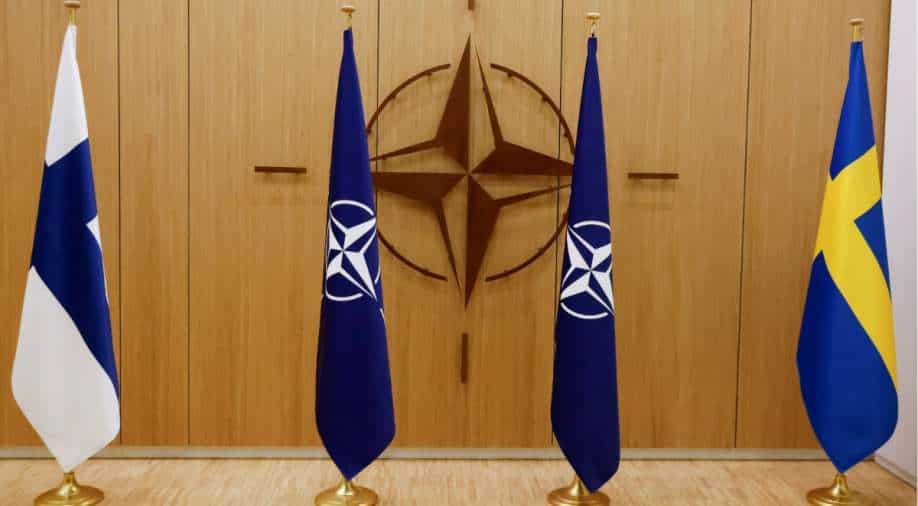 A view of the flags of Finland, NATO and Sweden during a ceremony to mark Sweden's and Finland's application for membership in Brussels, Belgium, May 18, 2022. Photograph:( Reuters )

NATO leaders will urge Turkish President Tayyip Erdogan to lift his veto over Finland and Sweden's bid to join the military alliance when they meet for a three-day summit on Tuesday, as the West strives to send Russia and China a signal of resolve.

Taking place in the shadow of Russia's war in Ukraine, the Madrid gathering comes at a pivotal moment for the transatlantic bond after failures in Afghanistan and internal discord during the era of former U.S. President Donald Trump, who threatened to pull Washington out of the nuclear alliance.

Spain, whose king will host a dinner for leaders, is also pushing for more NATO focus on the southern flank to address migration and militant groups in the Sahel region of Africa.

The leaders of Australia, New Zealand, Japan and South Korea are expected to attend part of the summit, part of a broader U.S. strategy for a more assertive Western presence in the Indo-Pacific region to counter China.

"We will do more to ensure we can defend every inch of allied territory, at all times and against any threat," NATO Secretary-General Jens Stoltenberg said in a speech last week.

Although British and U.S. officials have advised against a Baltic request for permanent multinational forces in the region, the summit is likely to settle on a compromise of promising rapid reinforcements.

Germany has already said it will put more troops at the ready to defend Lithuania should Russia seek to seize NATO territory and Britain is expected to do the same for Estonia, while Latvia is looking to Canada to pledge more troops there.

NATO - created in 1949 to counter the Soviet threat - is under no treaty obligation to defend Ukraine, as the former Soviet republic is not a NATO member.

But Russian President Vladimir Putin's Feb. 24 invasion has sparked a geopolitical shift as once neutral countries Finland and Sweden seek to join the North Atlantic Treaty Organisation and Ukraine has formally become a candidate to join the European Union.

If accepted, Finland and Sweden's inclusion into NATO would bring about the expansion of the alliance that the Russian leader aimed to prevent.

"I think it sends an important message to Putin. And I think it would actually significantly strengthen the alliance," U.S. Senator Angus King said of Finland and Sweden, following a trip to Finland, Latvia and Turkey.

However, Turkey is also testing that unity, angered by what it says is Helsinki and Stockholm's support for Kurdish militants and arms embargoes on Ankara.

A Turkish government official involved in the talks between the three countries and NATO's Stoltenberg told Reuters it would be difficult to reach a deal at the summit, saying that Sweden and Finland must first address Turkish concerns.

"There were meetings, but unfortunately steps we expected are not being taken," the official said.

Sweden has set up a process for ongoing consultations, diplomats said. But two senior NATO diplomats said the dispute was less about technical benchmarks and more about politics.

Erdogan's stance has proved popular at home before a June 2023 presidential election as he seeks to challenge U.S. and European priorities. In recent weeks, he has threatened more military operations in northern Syria, stoked tensions with fellow NATO member Greece and declined to join Western sanctions on Russia over the Ukraine war.

"I think there's nearly zero chance that this issue will be resolved at the Madrid summit," said Soner Cagaptay, a Turkey analyst at the Washington Institute, a U.S. think-tank.

U.S. President Joe Biden could hold a meeting with Erdogan in the margins of the NATO summit to push for progress with Finland and Sweden, whose leaders will be in Madrid.

But Cagaptay added that Erdogan could try to use the situation to boost his popularity and call a possible snap election in November ahead of the official June 2023 vote.