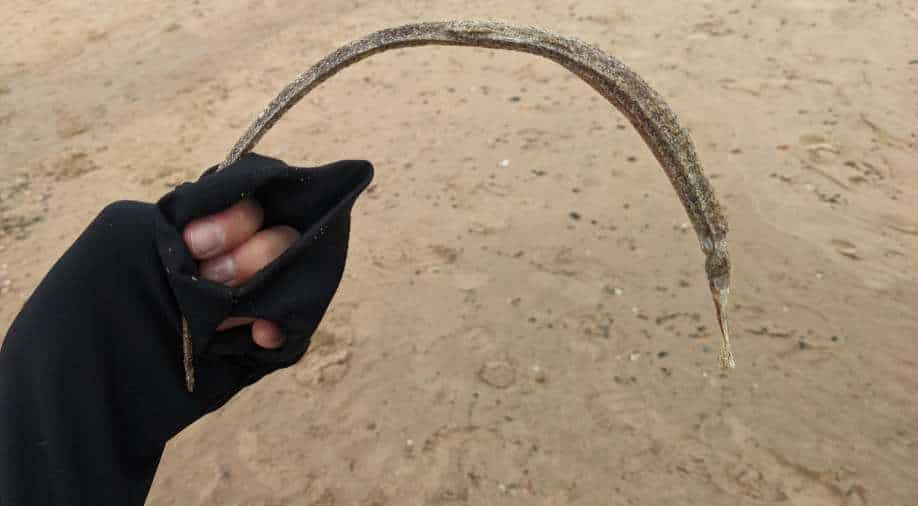 (Credit: reddit) The creature later turned out to be a pipefish Photograph:( Agencies )

The responses were anything but helpful as they ranged from serious to absolutely insane, with one user joking that it's a 'forbidden churro'

A mysterious sea creature has left the internet baffled after it was found lying ashore on a beach by morning walkers in Ireland.

The long, thin, grey animal was found by a man who then posted a picture of it on Reddit. Many are calling it a ‘forbidden churro', referring to the long, deep-fried cinnamon snack which looks a bit like the creature's elongated and ridged body, The Mirror reported.

"Can anyone help me identify this sea creature? Just found it washed up on a beach in Ireland," the man said.

And the responses were anything but helpful as they ranged from serious to absolutely insane, with one user joking that it's a "forbidden churro".

While another suggested it may be a "Goa'uld", a race of sentient parasitic beings from the sci-fi series Stargate SG-1.

Another Redditor called it the “jörmungadr”, a sea serpent in the Norse mythology popularised by the ‘God of War' franchise.

However, there was one user, who after much research and internet scrolling, revealed the identity of the aquatic beast.

"I think it might be a greater pipefish (Syngnathus acus)," a person wrote.

To which the person who found it replied, "You're right! Just looked that up and it looks identical. Thanks for your help. I don't know much about marine biology and really appreciate it."

Pipefish are a subfamily of small fish which are closely related to both seahorses and seadragons.

Pipefishes are very slender, long-bodied fishes that are covered with rings of bony armour. They have long tubular snouts and small mouths, a single dorsal fin, and usually a small tail fin.

They are often found along the western coast of Britain and Ireland.