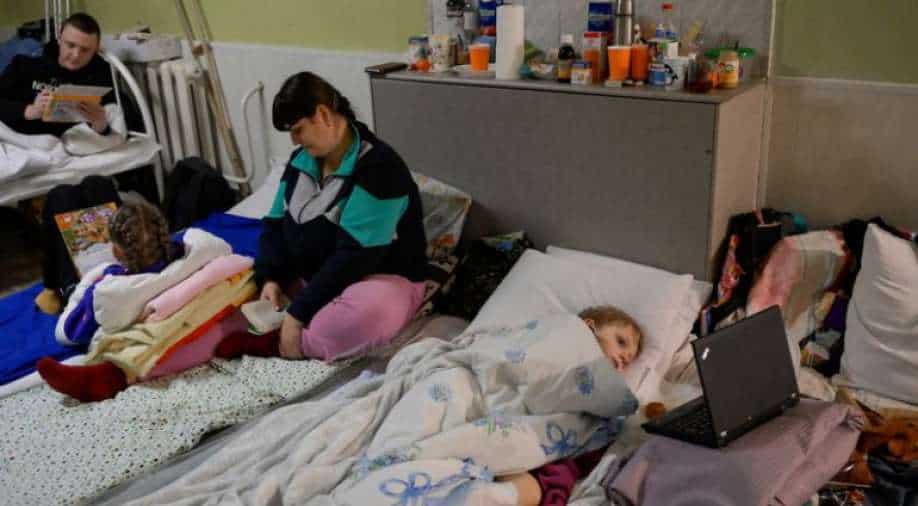 Children and parents pass the time in the basement of a hospital in Mykolaiv. Photograph:( AFP )

The frontline has even moved back slightly after Ukrainian forces launched a counter-offensive in Kherson, about 80 kilometres (50 miles) to the southeast, the country's only major city seized by Russian troops

For three weeks, 13-year-old Sofia has been stuck in bed in the basement of a hospital in the southern Ukrainian city of Mykolaiv undergoing three operations that have still not removed all the shrapnel from her skull.

Yet, she's still smiling, dreaming of playing the guitar and one day becoming a painter.

After some terrible weeks in which the Russian army has tried -- in vain -- to blow up this strategic city, the threat in the last few days seems to have eased a bit.

The frontline has even moved back slightly after Ukrainian forces launched a counter-offensive in Kherson, about 80 kilometres (50 miles) to the southeast, the country's only major city seized by Russian troops.

Mykolaiv is a key city on the road to Odessa, Ukraine's biggest port.

While dozens of residents, including many children, are leaving the city on yellow coaches every morning headed west, others are beginning to hope for a return to an almost normal life.

"The weather is beautiful," said the regional governor, Vitaly Kim, in one of the videos on social media that has made him popular since the Russian invasion. "And without strikes, it would be even more so."

At the weekend, the air raid sirens no longer disturb onlookers, who are more and more on the streets. Most barely hurry when they hear them.

It was one of these strikes on March 5 on a village near Mykolaiv that led Sofia to the basement of the paediatric hospital from which she dreams of leaving soon.

"She received shrapnel to the head, some of which have not yet been able to be removed," says her mother, Ludmila, at the teenager's bedside where Sofia lies under a colourful blanket with a big white teddy bear for a companion.

"Now I can move my arms and legs a little, I still can't get up without my mother's help, but hopefully I can leave soon," says a stoic Sofia, with bandages on her hands and on her head in the neurosurgery department, demarcated by sheets hung on a wire with clothes pegs.

"She has already undergone several operations, but the pieces are still there. Her life is no longer in danger, but it could harm her health, so that's why we are preparing to operate again," says Irina Tkachenko, a medical officer at the hospital.

"I know that I must not let myself go, otherwise I will crack," says Ludmila, who pushes back tears before recovering, a little reassured by the courage shown by her daughter.

"I want to make a guitar to learn to play," Sofia says, "since my little brother broke mine". "But we'll buy you one," her mother gently promises her.

"I dream of being an artist, I studied painting for a semester," Sofia continues, adding: "I want to be a famous painter and live from my art."

On the other side of the sheet is Micha, five, who lost his mother in a bombing. With his head wrapped in a thick bandage, he gets up from his cluttered bed to let his grandparents help him get dressed.

Also read | If I was the US President, I’d threaten to drop a nuclear bomb on Russia: Trump

"We turned our basement into a shelter, divided into sections for neurosurgery, surgery, traumatology and neonatology," Tkachenko says.

"At the height of war, when we were attacked by fascists -- there is no other word -- we had 12 children admitted with injuries of varying severity," says the hospital's chief doctor, Alexander Plitkin, "as well as two we could not save".

"Now the situation has stabilised a bit," he adds.

In another sign of respite, the governor eased restrictions on the sale of alcohol by allowing it on weekends but warned the limits would be reinstated in the event of excess.

Watch | Ukraine under attack: Russians come out in support of Ukraine