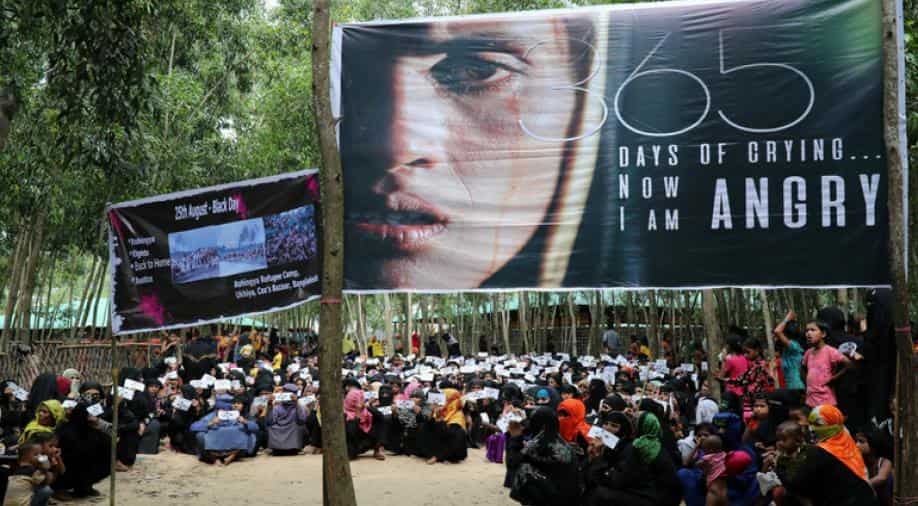 Southeast Asian foreign ministers have urged Myanmar to give a full mandate to an inquiry commission to hold accountable those responsible for the violence in Rakhine state, Singapore said on Tuesday.

Over the last year, more than 700,000 Rohingya Muslims have fled Buddhist-majority Myanmar to neighbouring Bangladesh, according to UN agencies, following a military response to attacks on security posts by Rohingya insurgents.

A recent UN report accused Myanmar`s military of gang rapes and mass killings with "genocidal intent" in Rakhine and called for its commander-in-chief and five generals to be prosecuted under international law.

"We expressed our grave concern with these alleged acts of violence... This is a man-made humanitarian disaster and something which should not be happening in this day and age," Balakrishnan said, referring to the meeting of the 10-member Association of Southeast Asian Nations, which includes Myanmar.

"The foreign ministers urged the Myanmar government that...an independent commission of inquiry...should be given a full mandate to investigate and to hold all those responsible fully accountable."

Singapore chairs ASEAN this year and regional leaders will meet next month in the city-state.

Myanmar`s government spokesman, Zaw Htay, did not answer telephone calls on Tuesday. Last month, he said he would no longer speak to the media over the phone but only at a biweekly conference.

In July, Myanmar established a commission of inquiry to probe allegations of human rights abuses in Rakhine, which includes two local and two international members from Japan and the Philippines.

ASEAN, formed more than half a century ago, has historically struggled with challenges facing the region because it works only by consensus and is reluctant to get involved in any matter deemed to be internal to any of its members.

The group`s recent statements on Rakhine have focused on the importance of the repatriation of displaced persons to Myanmar and reconciliation among communities.

But amid the international condemnation, it appears to be taking a firmer stance.

Balakrishnan said that if left to "fester", the situation in Rakhine could lead to the spread of terrorism which would threaten "Southeast Asia and beyond".
"They (the Myanmar government) do need to do the right thing...for all the vulnerable, defenceless and innocent victims," said Balakrishnan.