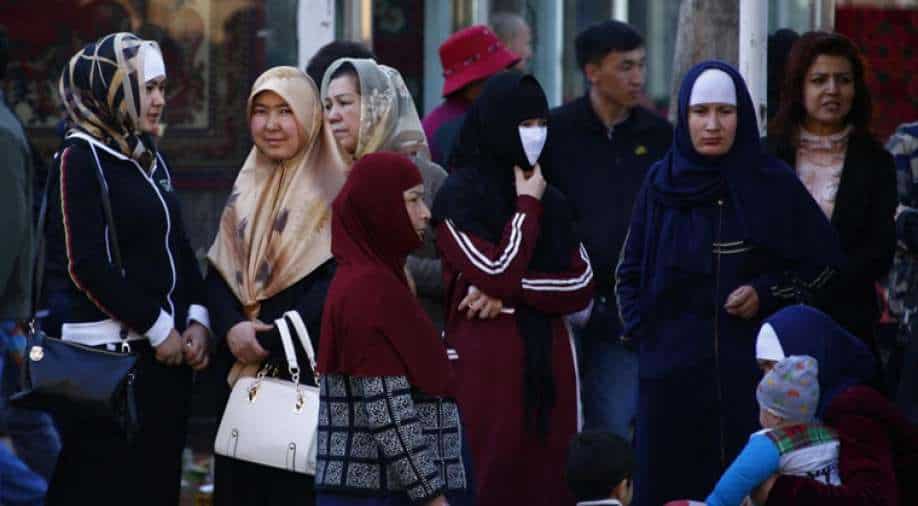 Uyghur women stand next to a street to wait for a bus in downtown Urumqi, Xinjiang. Photograph:( Reuters )

Hasiyet Ehmet, now 57 and a resident of Manas (in Chinese, Manasi) county in Changji Hui Autonomous Prefecture in Xinjiang, has not been heard from since she was abducted by authorities in May 2017.

An Uyghur woman who was arrested in the middle of the night in China's Xinjiang region more than four years ago was sentenced to 14 years in prison for giving Islamic education to youngsters in her neighbourhood and hiding copies of the Quran.

Hasiyet Ehmet, a 57-year-old native of Manas (Manasi) county in Xinjiang's Changji Hui Autonomous Prefecture, has been missing since Chinese officials kidnapped her in May 2017.

After RFA (Radio Free Asia) first reported on Hasiyet's case, a source familiar with the situation told RFA's Uyghur Service that the woman had been sentenced to 14 years in prison — seven for teaching the Quran and giving religious lessons to local children, and another seven for hiding two copies of the sacred text during a period when police began confiscating religious books from Manas county residents.

Chinese officers from the county's No. 3 police station entered Hasiyet's home and slapped a black hood over her head, ignoring her pleas to change her clothes or get her medicine before escorting her away.

According to a Manas county court official, Hasiyet Ehmet was sentenced to 14 years in prison.

According to RFA (Radio Free Asia), for years, Chinese authorities in the Xinjiang Uyghur Autonomous Region have targeted and arrested a number of Uyghur businessmen, intellectuals, and cultural and religious figures as part of a campaign to monitor, control, and assimilate members of the minority group in order to prevent religious extremism and terrorist activities.

Since 2017, 1.8 million Uyghurs and other Turkic minorities are reported to have been incarcerated in a network of detention centres in Xinjiang.

Beijing has disputed numerous and documented complaints that it has abused Muslims in Xinjiang, claiming that the camps are vocational training institutes.