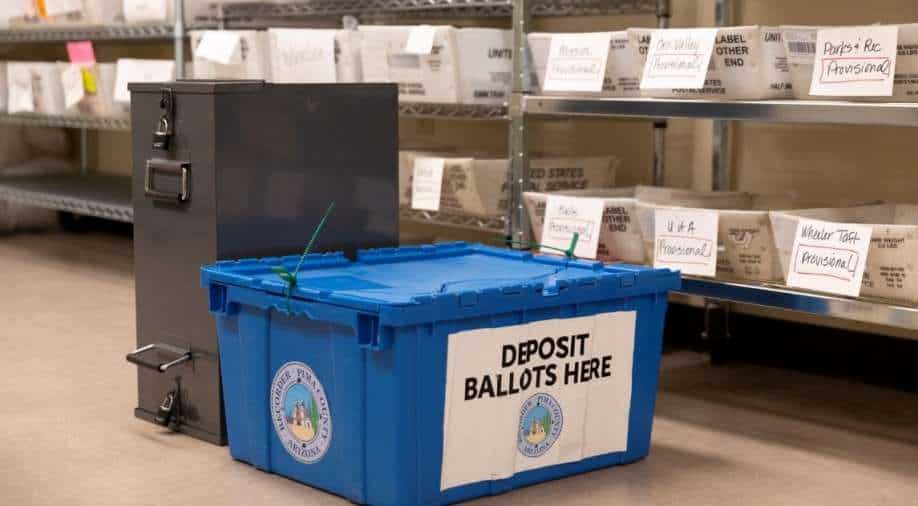 Boxes containing early voting and absentee ballots wait to be processed ahead of the upcoming presidential election in Tucson, Arizona Photograph:( Reuters )

In the final day of a campaign unlike any other, President Donald Trump and his Democratic challenger Joe Biden spent Monday swarming the swing states that will decide the result of the US election 2020.

Meanwhile, over 95 million Americans had cast their votes in the 2020 presidential election by Monday, according to a tally by the US Elections Project at the University of Florida, a harbinger of what is expected to be the highest turnout of modern times.

The record-breaking number is about 69 per cent of the 2016 total turnout in which Donald Trump contested against Hillary Clinton.

The new turnout shows the new interest of the Americans in the leadership of the country. it is also being understood as a cry for help by the Americans who are rushing to elect their choice of candidate to make sure their demands and ideologies are met.

Experts are predicting that the total voter count can surpass 138 million with the 2016 elections as a comparison model, a total of 47 million voters had cast their ballot four days before the elections in 2016.

A sharp increase in mail-in and early in-person voting was largely prompted by the coronavirus pandemic, which has killed more than 230,000 people in the United States and continues unabated in many US states.

President Donald Trump, his administration criticized for its handling of the COVID-19 outbreak, trails Democratic challenger Joe Biden in national opinion polls. A Reuters/Ipsos poll taken on October 27-29 shows Biden ahead, 51 per cent to 43 per cent.

But the race is still a toss-up in battleground states that decide the election through the Electoral College, including Arizona, Florida, and North Carolina.

A large number of Trump's Republican supporters are expected to turn up in person to vote on Election Day after Trump sowed distrust, without evidence, of mail-in voting by asserting it was riddled with fraud.

Democrats have largely embraced early voting, not only because of the pandemic but also because of steps the Trump administration has taken to slow down the processing of US mail.

Experts predict turnout will easily surpass the 138 million who voted in 2016. Only 47 million votes were submitted before Election Day four years ago.