More than 40 people dead as Taiwan train derails in tunnel 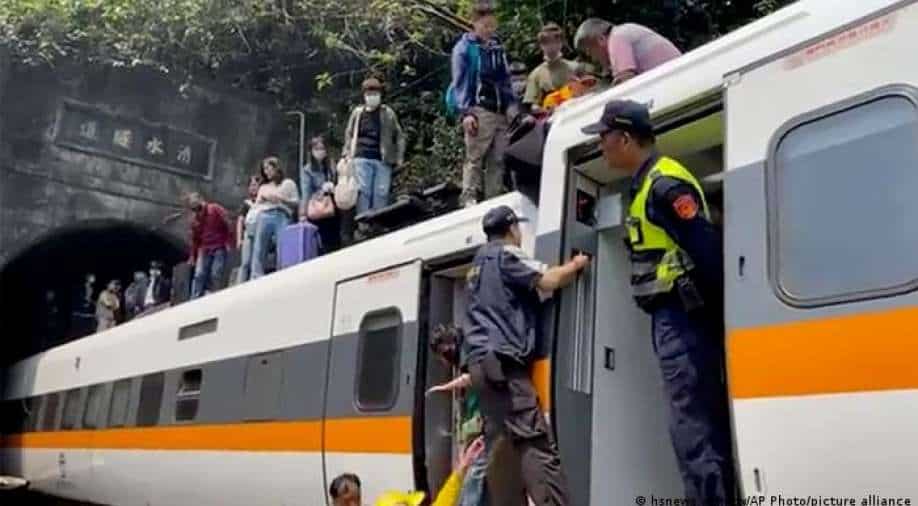 Many people were trapped inside the derailed train in eastern Taiwan Photograph:( Reuters )

The eight-car train was going from Taipei to the southeastern city of Taitung carrying some 350 passengers, the rescue centre said

Dozens of people were killed on Friday when a packed train derailed inside a tunnel in eastern Taiwan, the island's worst railway accident in decades.

Taiwan's National Fire Agency said at least 48 people were confirmed dead with 66 others sent to hospital.

The crash, which also injured more than 40 passengers, is the island's worst rail disaster in at least four decades.

Officials said the accident could have been caused by a maintenance vehicle sliding down an embankment and striking the train before it entered the tunnel near the coastal city of Hualien.

"There was a construction vehicle that didn't park properly and slid onto the rail track," Hualien county police chief Tsai Ding-hsien told reporters.

"This is our initial understanding and we are clarifying the cause of the incident," he added.

Local media pictures from the scene showed the back of a yellow flatbed truck on its side next to the train.

President Tsai Ing-wen's office said she had ordered hospitals to prepare for a mass casualty event.

The accident occurred on Taiwan's eastern railway line around 9.30am (0130 GMT) near the coastal city of Hualien. The eight-car train was making its way from Taipei to the southeastern city of Taitung and was carrying some 350 passengers, the rescue centre said.

Between 80 to 100 people were evacuated from the first four carriages of the train, while carriages five to eight have "deformed" and are hard to gain access to.

The accident occurred at the start of the busy annual Tomb Sweeping festival, a long holiday weekend when Taiwan's roads and railways are usually packed.

Taiwan Railways Administration issued a separate statement saying "many" were without signs of life, citing the local fire department.

Taiwan's mountainous east coast is a popular tourist destination, and the railway line from Taipei down the east coast is renowned for its tunnels and route that hugs the coast just north of Hualien where the crash occurred.

The line connecting Taipei with Hualien was only opened in 1979.