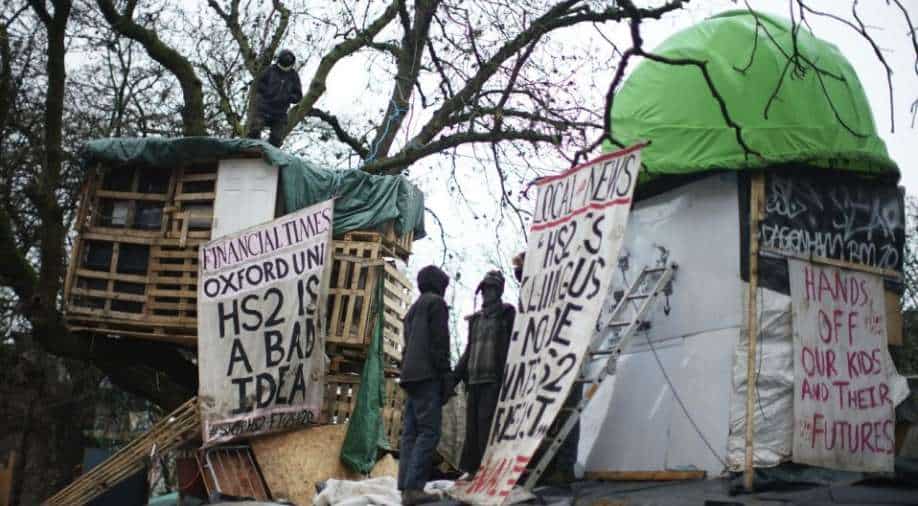 Members of the HS2 Rebellion group, including legendary British activist Daniel Hooper, known as Swampy, had been burrowed in 100-feet (30-metre) long tunnels dug three feet beneath Euston Square for over a month.

An environmental protest in which nine activists dug themselves into secret tunnels near a central London railway station to demonstrate against a new rail-link ended on Friday, according to the operating company.

Members of the HS2 Rebellion group, including legendary British activist Daniel Hooper, known as Swampy, had been burrowed in 100-feet (30-metre) long tunnels dug three feet beneath Euston Square for over a month.

The network of tunnels was discovered on January 26, having been created by protesters who oppose the redevelopment of the area for the HS2 railway line.

Hooper, who spent a week in a tunnel trying to stop a road development in southwest England in 1996, was arrested after leaving the site on Thursday, along with 18-year-old Blue Sandford and an unnamed 22-year-old woman.

Hooper's son, 16-year-old Rory Hooper, left the site last week, and others were removed earlier, leaving only one protester who was removed on Friday morning.

"HS2 staff, our agents and the emergency service personnel have acted with safety as their utmost priority, risking their own lives in order to ensure the well-being of those who placed themselves in such a dangerous situation underground," HS2 Ltd said.

The firm claimed its staff were "subject to numerous incidences of violence and criminal activity during this operation, including alleged theft and assault".

"Instead of wasting public resources on illegal actions, we urge environmental organisations to support a project that will help cut the number of cars and lorries on our roads, cut demand for domestic flights, and help the country's fight against climate change," it added.

HS2 is a flagship government rail project set to cost some £100 billion ($137 billion, 115 billion euros) that aims to link London to cities in central and northern England.

It will be Britain's second high-speed line after HS1, which is used by the cross-Channel Eurostar service linking London to Paris, Brussels and Amsterdam, as well as providing Kent commuter services in and out of London.

But the much-delayed project, work on which started last September, has caused outrage among green groups who say it will destroy ancient woodland and do little to help Britain meet its climate targets.

Sandford had earned comparisons to Swedish activist Greta Thunberg when she went on a "school strike" to focus on the Extinction Rebellion movement more than a year ago.