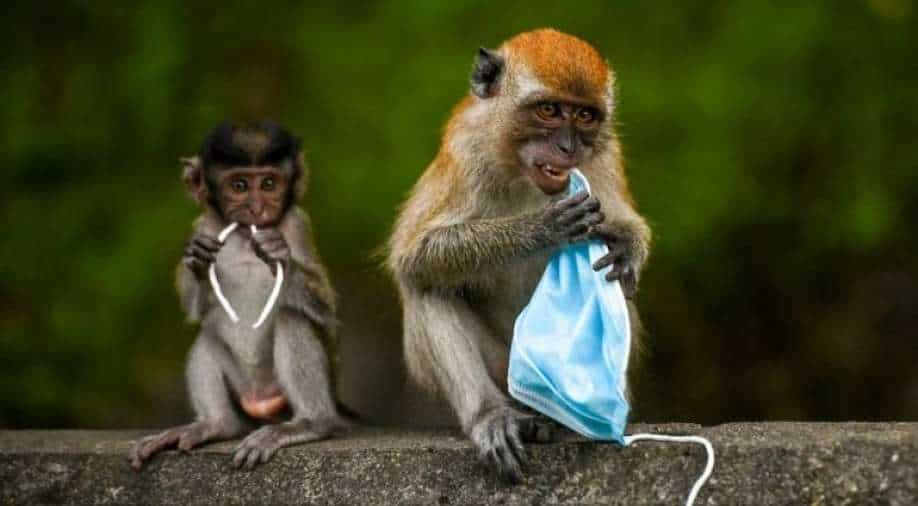 Macaque monkeys attempt to eat parts of a face mask, used as a preventive measure against the spread of the COVID-19 novel coronavirus, left behind by a passerby in Genting Sempah in Malaysia’s Pahang state on October 30, 2020. Photograph:( AFP )

In Finland, a group of monkeys exhibited a preference for the sounds of traffic over the sound of nature

Have zoo animals become so used to the sound of humanity that they no longer prefer natural noises? A group of researchers seem to think so. In Finland, a group of monkeys exhibited a preference for the sounds of traffic over the sound of nature.

At the Korkeasaari Zoo in Helsinki, a monkey enclosure was fitted with sensors. The white-faced saki monkeys were then given the option to choose between a playlist loaded with traffic noises, nature, rain, and dance music among many.

In pics: 8 animals you didn't know could sing!

Dr Ilyena Hirskyj-Douglas, a researcher at the Aalto University in Finland, told Sky News that they were surprised to find that the monkeys preferred traffic sounds more than the apperceived calming sounds.

Among monkeys, the traffic playlist was the top hit. While the playlist played, monkeys groomed themselves, and even slept with he sounds on. This is peculiar because they did not perform any of these activities while listening to other playlists.

According to the zoo’s research coordinator - Kirsi Pynnonen, the noise on roads mimics patterns and mechanisms in which animals communicate with each other.

She told Sky News that animals employ “high-pitched hissing, squeaking, and croaking to stay in contact with each other”.

The experiment was done as part of an ongoing research which intends to understand how technology can be employed to improve the condition of animals that live in captivity.

Dr Hirskyj-Douglas signalled that this is just the beginning, and that later animals could control lighting and temperature settings, and even play games on their own.

Next up, the team of researchers will set up screens to offer monkeys the chance to watch what they wish to see on the big screen.