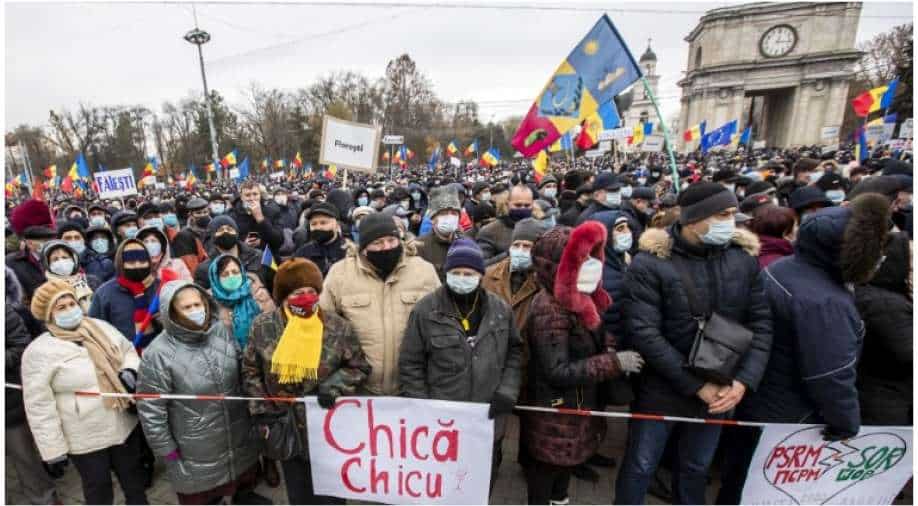 People take part in a rally to demand the government's resignation and snap parliamentary elections on December 6, 2020 in central Chisinau. Photograph:( AFP )

Thousands of protesters demanded Moldovan government's resignation and snap parliamentary elections as they rallied in the country's capital on Sunday. Moldova last month elected pro-European Maia Sandu to the presidency, earning her a surprise victory over pro-Russian incumbent Igor Dodon.

However, Moldovan lawmakers passed a bill a bill this week that transferred control of intelligence agency from the president to the parliament. Mai Sandu then called on her supporters to rally againt this decision.

On Thursday, more than 5000 people rallied against the decision. Sunday saw even bigger protest. More than 50,000 protesters gathered in front of the parliament building, according to organisers.

AFP journalists at the scene said that at least 20,000 protesters had turned out.

The opposition said many more could not make it to the rally, and accused police of having blocked entry to Chisinau to those coming from outside, including farmers who had arrived in tractors.

During the protest, demonstrators chanted "Down with Dodon!" and "We will not give in!" Hundreds of police cordoned off the parliament building, but did not interfere with the rally.

Protesters also demanded inauguration of Sandu as the president on December 10. Moldova's constitutional court is expected to officially confirm her victory.

Her inauguration is currently scheduled for two weeks later.

"We cannot wait for the inauguration of the president on December 24," said opposition lawmaker and deputy speaker of parliament Alexandru Slusari.

"Igor Dodon will plunder the whole country in these two or three weeks."

Speaking at Sunday's rally, Sandu reiterated her call for the government to resign and for early parliamentary elections.

"Igor Dodon does not want to admit defeat," she told the crowd. "He wants now to set fire to the country, provoke chaos, drive Moldova into international isolation!"