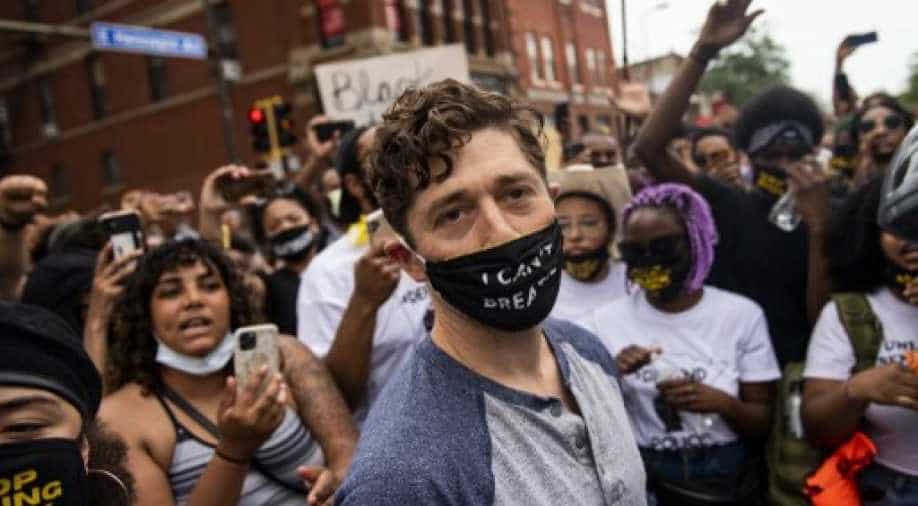 Mayor Jacob Frey leaves after coming out of his home to speak during a demonstration calling for the Minneapolis Police Department to be defunded Photograph:( AFP )

Protesters chanted 'Go home, Jacob, go home' as the video went viral as thousands of demonstrators continued to protest in the city against the alleged widespread racial bias in the police.

Minneapolis mayor Jacob Frey was jeered by protesters after he declared that he was against de-funding the police even as the death of George Floyd by a city policeman inflamed the nation.

Protesters chanted “Go home, Jacob, go home" as the video went viral as thousands of demonstrators continued to protest in the city against the alleged widespread racial bias in the police.

This is Jacob Frey, the young and left-wing mayor of Minneapolis.
But not left enough for the protestors.
He refused to agree to their demand for the abolition of the police department.
So he had to walk away through cries of shame.
Much like that scene from Game of Thrones. https://t.co/wA9dOjQOvg

Jacob, 38, had criticised the use of force in the death of Floyd amid calls from residents to de-fund the police. After the mayor came out to address the gathering local media channel caught him saying that he wanted “massive structural reform to revise a structurally racist system”  but added that “I’m not for abolishing the entire police department. I will be honest about that."

This is so powerful. Listen to her speak. @Jacob_Frey, you have disappointed your entire city by letting your police force to continually attack innocent black citizens. I hope you feel every ounce of shame that you should. Have a great night. https://t.co/cuQoeoaCZl

The video showed the crowd erupting with anger.

A woman in the crowd reportedly gave the mike a mike to speak on the issue and when he refused to de-fund the police the protesters responded by saying “Go home, Jacob, go home!” and “Shame! Shame!”

Amid angry scenes which swept the nation, the gruesome killing of Floyd caught on camera has led the University of Minnesota, Minneapolis Public Schools and the Minneapolis Park and Recreation Board to end their relationship with the city police department.