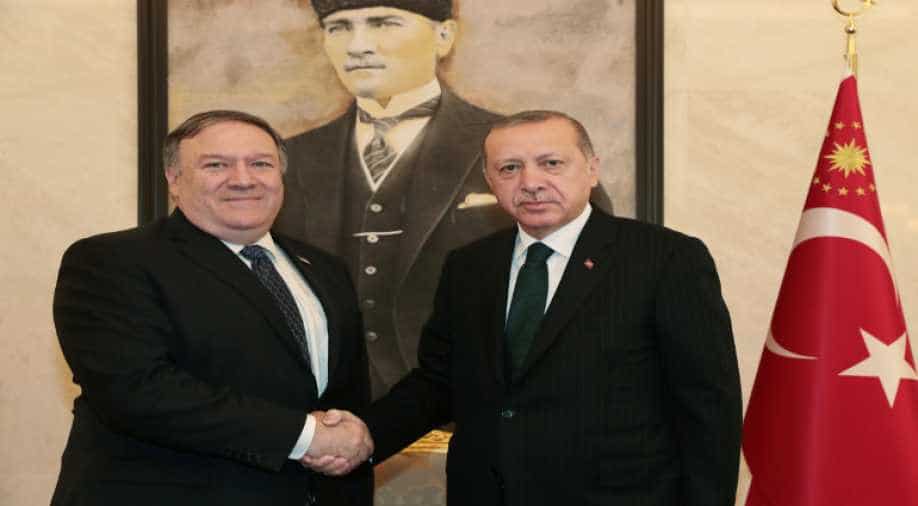 Khashoggi, a US resident and a critic of the Saudi crown prince, vanished after entering the Saudi consulate in Istanbul on Oct. 2.

US Secretary of State Mike Pompeo met Turkish President Tayyip Erdogan in Ankara on Wednesday to discuss the developments on a police investigation into the disappearance of Saudi Journalist Jamal Khashoggi.

Pompeo, who flew to Ankara from Riyadh where he met with Saudi King Salman and the crown prince, was scheduled to hold bilateral talks with Turkish Foreign Minister Mevlut Cavusoglu before winding up his visit.

US President Donald Trump, who dispatched his top diplomat to address the crisis, has given Saudi Arabia the benefit of the doubt in Khashoggi's disappearance, even as US lawmakers pointed the finger at the Saudi leadership, and Western pressure mounted on Riyadh to provide answers.

Turkish Foreign Minister Mevlut Cavusoglu has said Pompeo would bring information about the case to Ankara, two weeks after Khashoggi vanished when he visited the Saudi consulate in Istanbul to collect documents for his planned marriage.

Turkish officials have said they believe Khashoggi - a prominent critic of Saudi Arabia's Crown Prince Mohammed bin Salman - was murdered and his body removed. Turkish sources have told Reuters the authorities have an audio recording indicating that Khashoggi was killed inside the consulate.

The Saudis have strongly denied the accusations, but U.S. media outlets have reported that they will acknowledge Khashoggi was killed in a botched interrogation. Trump has speculated that "rogue killers" could be responsible, but gave no evidence to back up that theory.

After meeting with King Salman and the crown prince on Tuesday, Pompeo told reporters that Saudi Arabia has committed to conducting a complete investigation into Khashoggi's disappearance.

Khashoggi, a US resident and a critic of the Saudi crown prince, vanished after entering the Saudi consulate in Istanbul on Oct. 2.

Turkish officials have said they believe the Saudi journalist was murdered and his body removed, which the Saudis have strongly denied.