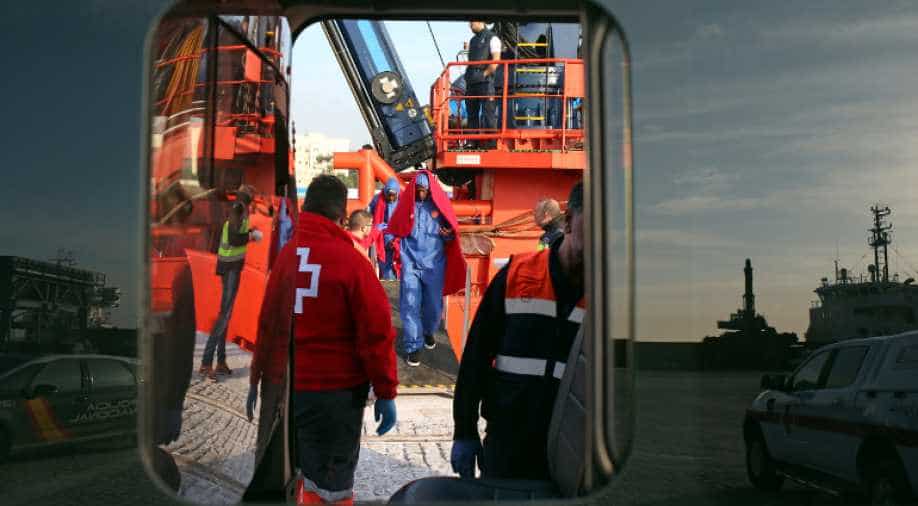 Migrants, intercepted off the coast in the Mediterranean Sea, disembark from a rescue boat at the port of Malaga, southern Spain, November 13, 2018. Photograph:( Reuters )

More than 120 migrants, from North Africa and Sub-Saharan Africa, have arrived in Spain each day during November, following a record month in October with over 350 per day, the International Organization for Migration (IOM) said.

At least 631 African migrants have died trying to reach Spain so far this year, nearly three times more than in all of 2017, and the situation has become "alarming", the UN migration agency said on Friday.

More than 120 migrants, from North Africa and Sub-Saharan Africa, have arrived in Spain each day during November, following a record month in October with over 350 per day, the International Organization for Migration (IOM) said.

"This is usually a time of slowing down on these routes, that is not happening in Spain," IOM spokesman Joel Millman told a news briefing.

Migrants are using smaller and less seaworthy boats, he said.

About two dozen migrants drowned off the coast of Cadiz in November, he said. The sole survivor of another shipwreck, a teenage boy from Guinea now in hospital with severe hypothermia, told rescuers that he was travelling with nine others including his brother in an inflatable row boat from Tangiers, Morocco.

The arrival of hundreds of thousands of migrants into Europe has fuelled the rise of far-right parties across the continent in recent years, although numbers have fallen over the past three years. Many thousands of people, mostly from Africa and the Middle East, have drowned at sea.

So far this year 104,506 migrants have arrived by sea in Europe and 2,075 have perished, according to the IOM`s latest figures. Both figures are about two-thirds of last year`s totals and around a quarter of the totals from 2016.

But while traffic on the main sea route from Libya to Italy has fallen sharply over the past year, in part due to agreements with Libyan armed groups to fight smuggling, travel has increased across the western Mediterranean to Spain.

The route from Turkey to Greece, used by more than a million asylum seekers in 2015, was largely shut by an EU agreement with Turkey the following year.

In addition to migrants arriving by sea in mainland Spain, Millman said 36 migrants had died trying to reach the Canary Islands this year, compared to just one last year, Millman said.

"So that is becoming also a dangerous channel for migrants seeking to access Europe through the Canary Islands," he said of the islands, which are a part of Spain located in the Atlantic Ocean off the Moroccan coast.