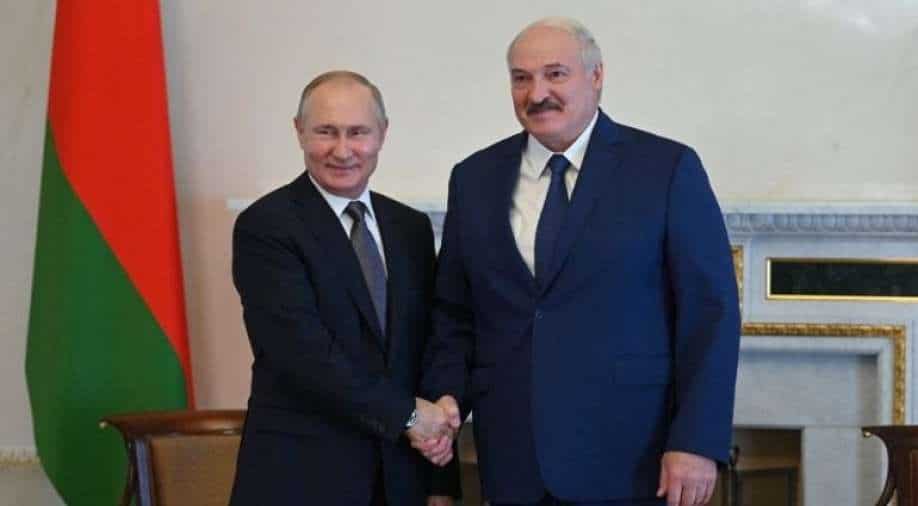 Lukashenko’s Belarus is Russia’s only full-fledged ally in Eastern Europe, the region that Moscow has long seen as its most important sphere of influence.

As European governments threatened Belarus with deeper sanctions this week for fomenting the migration crisis on the Belarusian-Polish border, its bombastic leader countered with what sounded like a trump card: He could stop the flow of gas to the West.

There was just one problem: It wasn’t his gas to stop.

So Friday, Russia — which sends much of its gas to Europe via Belarus — had to set the record straight for the Belarusian president, Alexander Lukashenko.

“Russia was, is and will remain a country that fulfills all of its obligations in supplying European customers with gas,” the spokesperson for President Vladimir Putin told reporters.

With thousands of migrants still stranded in the frigid cold on the edge of the European Union — encouraged by Belarus to go there but barred by Poland, an EU member, from crossing its border — the complex relationship between two allied autocrats looms large over the crisis. The mixed messaging over Russia’s natural gas exports was the latest sign that even as Putin continues to back Lukashenko, it is the Belarusian leader — a strongman who once ran a Soviet collective farm — who keeps raising the stakes.

Lukashenko’s Belarus is Russia’s only full-fledged ally in Eastern Europe, the region that Moscow has long seen as its most important sphere of influence. That gives him outsize leverage with Putin, even though his country of 9 million people has a fraction of the size — let alone the military might — of its eastern neighbour.

Now, with tensions between Belarus and the West reaching their highest level since Lukashenko brutally suppressed a popular uprising last year, some allies of the Kremlin say Russia is getting drawn into a crisis not of its choosing.

“We cannot allow the tail to wag the dog,” said Konstantin Zatulin, a senior Russian lawmaker from Putin’s party who specializes in relations with post-Soviet countries. “Lukashenko psychologically wants to be the victor — it is his desire to be macho. Between that desire and our policies, there is a difference that must be seen.”

Lukashenko’s gambit — Western officials have accused him of orchestrating the flow of migrants to the border — has underscored the uneasy alliance between his government and its powerful Russian ally. Last spring, facing a storm of international outrage over the forced landing of a European passenger jet with a Belarusian dissident on board, Lukashenko seemed to have no choice but to bow to his Kremlin benefactors and to assent to deeper integration with them.

But six months later, Lukashenko has wrapped up long-running talks with Putin without appearing to cede much Belarusian sovereignty, and he is again leaving the Kremlin no choice but to double down in its support.

“People in Moscow are totally sick and tired of Lukashenko,” said Sergei Markov, a pro-Kremlin analyst. “He is the cleverest of negotiators.”

On Friday, in a show of solidarity, Russia flew paratroopers to the vicinity of Belarus’ border with Poland for exercises with Belarusian soldiers. Two paratroopers died from injuries suffered in the exercises, the Russian Defense Ministry said. Earlier in the week, Russia twice sent nuclear-capable bombers on patrols to the same region.

The Belarus defence minister, Viktor Khrenin, asserted that Belarusian and Russian intelligence information showed that EU neighbours, especially Poland, had taken military actions that suggested they were ready to “start a conflict.”

But even some critics of Lukashenko and Putin believe that at some point, the Kremlin will try to pull Belarus back from confrontation.

“I think that in this specific crisis, the impulse to wrap it up will come via Russia,” said Artyom Shraibman, a Belarusian scholar for the Carnegie Moscow Center who was forced to flee Belarus this year. “For Russia, escalation will get uncomfortable.”

In the current crisis, Lukashenko’s goal is simple, if far-fetched, analysts say: to force the EU — which sees him as an illegitimate president — to negotiate with him and to drop its sanctions. A senior EU official said Friday that the bloc had “no information” indicating that Putin had instigated the migrant crisis, but criticized Russia for not influencing Belarus to stop it.

For now, the Kremlin appears content to let Europe struggle with Lukashenko on its own. Though Putin spoke with Chancellor Angela Merkel of Germany twice this week, Russian officials continue to insist that the Europeans must speak to Belarus directly.

With pressure mounting to end the border crisis, several airlines Friday said they were limiting flights to Belarus from the Middle East, where most of the migrants have travelled from. They include Turkish Airlines, one of the largest carriers to offer flights to Minsk, the Belarusian capital.

At the same time, aid groups described dire conditions for migrants huddled at the border, struggling against the cold and threats of violence. One Iraqi couple and a Syrian man were beaten and robbed, according to the activist coalition Grupa Granica.

The migration crisis comes amid the backdrop of rising tensions between Russia and Belarus’ southern neighbour, Ukraine — a onetime Russian ally that broke away in its pro-Western revolution in 2014. Ukraine’s turn looms large for Moscow, a cautionary tale that the Kremlin is determined not to repeat.

“Putin took Crimea, which is very good, but Putin lost Ukraine,” Markov said. “If he also loses Belarus, he will never be forgiven for it.”

Lukashenko has ruled Belarus since 1994, and for years profited from the competition between Russia and the West for influence in his country, provoking deep frustration in Moscow. That game ended last year, when he declared a landslide reelection victory in a vote widely seen as fraudulent, leading the EU to impose sanctions that continue to rankle him.

With Lukashenko’s opponents seen as too pro-Western, the Kremlin-backed him despite its reservations — saving Lukashenko’s regime but saddling Putin with an ever-more-erratic ally.

In Moscow, many expected the Kremlin’s backing to translate into tighter integration into a “union state” between Russia and Belarus that would have magnified Putin’s geopolitical sway. But those talks ended earlier this fall without an agreement on a common currency or legislature — signalling that Lukashenko was able to retain his independence.

Putin and Lukashenko, both in their late 60s, share a worldview focused on a two-faced, decadent West. Both have overseen harsh crackdowns on dissent in the past year. The 2020 uprising against Lukashenko in a neighbouring, Russian-speaking country spooked the Kremlin, Russian analysts say, and helped prompt Putin’s decision to dismantle the movement of opposition leader Alexei Navalny.

Lukashenko’s approach toward migration shows how he has sought to manoeuvre between Russia and the West. In 2018, he boasted that his country’s border guards were significantly reducing the trafficking of migrants and drugs into the EU. In recent months, he has swerved the other way, with Western officials saying he has orchestrated a wave of migration through the Minsk airport toward his country’s borders, hoping to embarrass the EU into legitimizing him.

On the ground in Minsk, the human toll of that strategy is evident.

When large numbers of asylum-seekers began arriving over the summer, a rights activist in Minsk said, they came as part of organized tour groups with reservations at the Yubileyny — a hotel complex operated by the presidential administration of the Republic of Belarus.

Now, they are starting to run out of money, said Alena Chekhovich, the activist in Minsk, with some forced to sleep on the street. Others relocated to hostels in the city center, even with expired visas — another sign, Chekhovich claimed, that the Belarusian government, which typically watches closely for migration violations, was exacerbating the crisis.

Chekhovich said many migrants who make it from Minsk to the border are basically marooned in makeshift camps there, monitored by Belarusian border guards who prevent them from returning.

“It’s sad that people are ending up in this situation simply because of the actions of the state,” she said.

New threat? What we know about Covid B.1.1.529 or Nu variant, supposedly dangerous than Delta