Miami opened up and the revelers flocked In. Then came the crackdown. 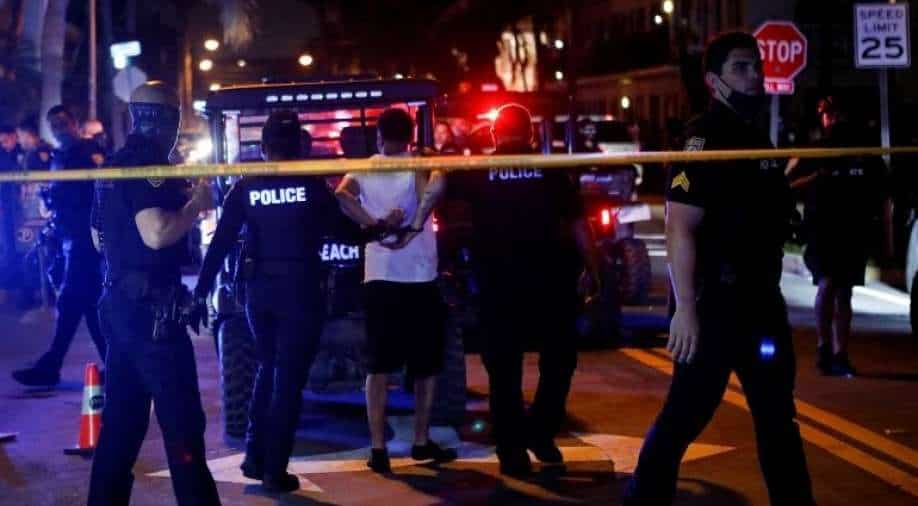 The huge crowds that gathered in the city’s famous 10-block beachside entertainment district starting in late February became unruly at times, with fights breaking out and gunshots fired into the air, causing stampedes

They were invited. So they came.

After a year of mostly staying inside, a mix of college students on spring break and tourists, by the tens of thousands, descended on Miami Beach, a vacation hot spot that — along with the rest of Florida — has lifted most COVID-19 restrictions, opening its restaurants, clubs and bars.

The huge crowds that gathered in the city’s famous 10-block beachside entertainment district starting in late February became unruly at times, with fights breaking out and gunshots fired into the air, causing stampedes.

In the weeks since, more than 1,000 people have been arrested, one-third or more on drug and alcohol consumption charges. Police have seized more than 100 guns. And there has been some violence; in perhaps the most serious case, two male visitors are accused of drugging and raping a woman who later died.

But the raucous partying was also, by and large, nonviolent, city officials say. And for that reason, many Black leaders in town have questioned what happened next.

On Saturday, the city declared a state of emergency. A few hours later, a military-style armored vehicle and police officers in riot gear moved down Ocean Drive, blaring sound cannons and firing pepper balls to disperse the crowds and enforce the newly declared curfew.

The resulting footage of heavily armed police officers cracking down on unarmed crowds reminded many people of last summer’s protests against police brutality, prompting local Black leaders to criticize Miami Beach city officials for being poorly prepared for the chaos and unnecessarily heavy-handed in their response. The city has been accused of racism before in its handling of large Black crowds, particularly during Memorial Day weekends over the years.

“This felt like a total overreaction,” said Stephen Hunter Johnson, chair of the Miami-Dade Black Affairs Advisory Board. “Of course their job is to make sure people are safe and to deal with unruly behavior, but why do they handle Black tourists so aggressively? I think people see these large crowds of young Black people, and there is anger and the sense that something must be done. We want our people to be treated the same as anyone else, not better or worse.”

Johnson also said that similar partying by white tourists in another spring break locale, South Padre Island in Texas, had not brought a similar police crackdown.

The mayhem — largely maskless revelers blowing off steam after months of lockdown, followed by sudden restrictions and police enforcement — also provides a cautionary tale for other tourist havens that are moving swiftly to reopen. That the partyers were mostly Black brought added scrutiny of race and policing in the post-George Floyd era.

“Right now, Miami Beach is at the intersection of COVID, race, policing and its own history,” said Marvin Dunn, a longtime Miami historian and retired university professor. “I would imagine other cities opening are looking at what happened here.”

Dan Gelber, the mayor of Miami Beach, said he understood the fraught optics of overpolicing of African Americans, especially in the wake of the police killing of Floyd last year and the nationwide racial reckoning that followed.

But he said that the police response was a reasonable strategy for clearing the streets and that he trusted the decisions of police leaders who were dealing with swelling crowds — and at least a few serious troublemakers. The strenuous police response, he asserted, was not caused by typical spring break antics.

“We did not target race; we targeted conduct,” he said in an interview. “What we have experienced the last month has been frightening. We’ve had gunplay, where people shoot up in the air and hundreds or thousands of people start storming in fear. The overwhelming number of people who are coming here are here to enjoy our city, but we are also getting a smaller crowd that’s interested in chaos.”

This is the second spring break season shaped largely by the pandemic. Last year, cities had to close beaches in mid-March as COVID cases soared and public health experts warned that the close gatherings were primed to become superspreader events.

This year, hundreds of universities canceled spring break to discourage students from traveling and congregating while the virus is still a threat. Waves of college students and other somewhat older vacationers flocked to Florida anyway, lured by cheap flights and hotels and the promise of loose COVID-19 regulations — creating some of the largest crowds in recent memory.

“This is not a typical spring break; you have people suffering from pandemic fatigue who really want to come and let off some steam with an anything-goes attitude,” said Raul Aguila, Miami Beach’s interim city manager, adding that some of the behavior had descended into lawlessness. “It’s the perfect storm of events that has led to this becoming a public safety issue.”

Phillip Carter, 30, flew from Baltimore to spend a few days on the beach but was quickly turned off by the large crowds.

“I know to not come on spring break,” he said. “It’s just a lot. It’s cool, but it’s just too many people. As many times as I’ve come to Miami, I’ve never seen it like this. It’s like a war zone. That’s what it feels like: a war zone.”

Before Miami Beach shut down its spring break festivities last year, it counted 332 arrests between Feb. 3 and March 7. During the same time period this year, the number has more than doubled to 731 arrests. As of March 21, there have been 1,050 arrests — many involving people older than 25 — on charges including public consumption of drugs or alcohol, reckless driving and resisting arrest.

In the case of the woman who died, police have arrested two North Carolina men on charges of drugging and raping her and stealing her credit cards. The woman, a 24-year-old from Pennsylvania, was later found dead in her Miami Beach hotel room.

Faced with what the mayor called an “overwhelming” number of visitors packed into the tiny beachfront strip, Miami Beach set a curfew Saturday afternoon that took effect at 8 p.m., along with a nightly shutdown of access to the island on which Miami Beach sits (both restrictions were extended into April).

Richard Clements, police chief in Miami Beach, defended the way the city had used officers in riot gear to clear the streets, saying the pepper balls had been used only when the crowd surged toward officers.

“The BearCat Vehicle was there as a support vehicle that would only be utilized in a rescue (downed officer or injured person) situation where extraction efforts from the location was impeded by the crowd,” he said in an emailed statement, referring to the armored vehicle.

He added that the response would be reviewed internally.

Daniella Pierre, president of the Miami-Dade NAACP, said the city needed to find alternative strategies for spring break crowds, such as providing cultural programming to keep visitors occupied and projecting a more welcoming attitude toward Black visitors, many of whom have complained in the past about excessive policing and hostility from some businesses.

“Inadequate planning,” she said. “The minute it became clear that Florida was going to be open, there should have been planning to accommodate the crowds. Of course the police were outnumbered because there was no plan. I am not condoning the violence or lawlessness; I am saying it felt like you looked at the group and treated them like they were here to do you harm.”

After driving two hours from his home in Montgomery, Alabama, to Atlanta to catch a flight to Miami with friends, TJ Ray, 32, learned their vacation trip to South Beach was suddenly in jeopardy.

News had reached them that city officials were cracking down — and hard — on large groups of tourists. They had shelled out hundreds on flights and an Airbnb, and now city officials were on national newscasts announcing they would be imposing a mandatory curfew.

The response from the city in implementing the curfew came off not only as heavy-handed, Ray said as he was hanging with friends on Ocean Drive, but too little, too late.

“They know how spring break is going to go,” he said. “We’ve been locked down with the pandemic, even though the pandemic’s still going on. They know people want to get out.”