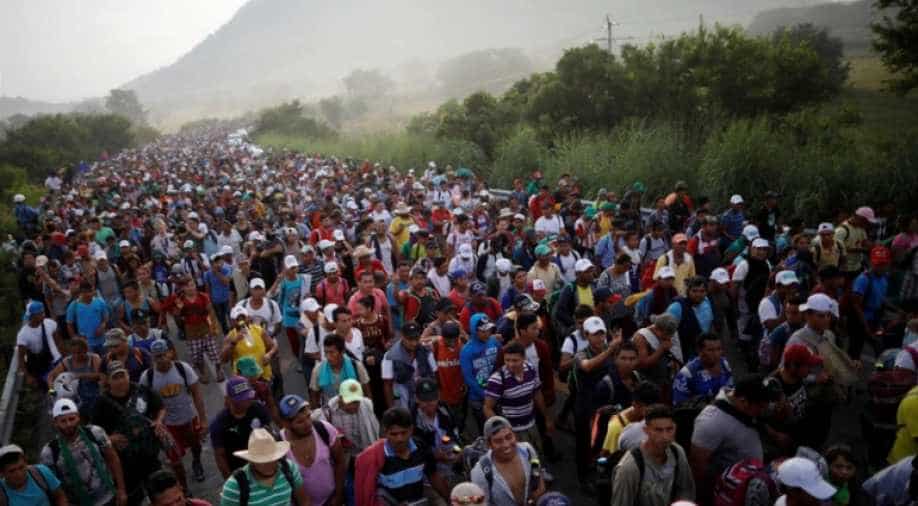 Fused with the Catholic festivals of All Saints' Day and All Souls' Day, the Day of the Dead is one of the most deep-rooted traditions in Mexico.

Mexico City dedicated its Day of the Dead parade on Saturday to migrants, just as thousands of Central Americans were trekking from the country’s southern border toward the United States under pressure from US President Donald Trump to disband.

In an a twist on the traditional dancing skeletons and marigold-adorned altars making their way down the capital’s main thoroughfare, the parade also referenced Mexicans who emigrated as well as foreigners who settled in the capital.

“The parade... is dedicated to migrants, who in their transit to other countries have lost their lives, and who in their passing through the country have contributed to a true ‘Refuge City,’” the Mexico City government said on Twitter.

In one segment, gray metallic panels representing the Mexico side of the US border wall were stenciled with the phrase, “There are also dreams on this side.”

The event ahead of November 1 and 2, when Mexicans observe Day of the Dead in town squares, homes and cemeteries, coincided by chance with the journey of a migrant caravan traveling into Mexico, many fleeing violence and poverty in Honduras and Guatemala.

Some plan to seek asylum in Mexico. Others intend to reach the United States, angering Trump who has threatened to close the border and cut aid to Central American nations.

The caravan arrived in the southern state of Oaxaca on Saturday and may reach Mexico City as soon as next Friday. City officials will make four shelters available to house the group, according to local media.

“It’s delicate... There are lots of things to think through and analyze,” he said.

The parade, which included dancers portraying Monarch butterflies, famous for their long migratory routes, ended at a massive altar decorated with skeleton figures that local officials dedicated to migrants who have died.

“Mexico has always, traditionally, been a country of crossings,” said Mariana Villalobos, 33, at the parade. “It has a long tradition in accommodating migrants as well as refugees. And the current political situation... shows this is something very much alive.”