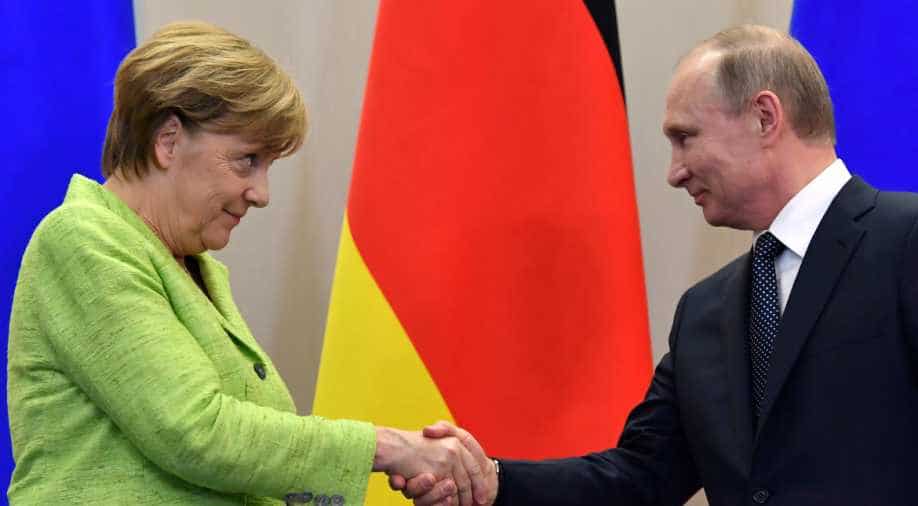 German Chancellor Angela Merkel and President Vladimir Putin insisted Tuesday that there was no alternative to a stalled Ukraine peace plan as they struggled to mask deep rifts during a first meeting in Russia since 2015.

Merkel pushed Putin at a frosty encounter to ensure a ceasefire in war-torn east Ukraine, but the Russian leader laid the blame on Kiev for a European-brokered peace deal hitting a dead end.

The rare visit also saw the German chancellor confront Putin over rights issues in Russia, including the alleged persecution of gay men in the North Caucasus region of Chechnya.

"I think we have differences but international politics means to always keep looking for dialogue," Merkel said at a press conference in the Black Sea resort city of Sochi.

The meeting was meant to focus on preparations for the G20 summit in Hamburg in July, and no major breakthroughs were expected on mending the deep divisions caused by the conflict in Ukraine.

The German leader has strongly backed EU sanctions on Russia for seizing Crimea from Ukraine in 2014 and for supporting a pro-Kremlin separatist insurgency in the east of the country.

Merkel said she hoped some of the sanctions could be lifted if a flatlining peace plan brokered by her and French President Francois Hollande in 2015 was fulfilled.

And both leaders admitted there was no choice but to stick to the process despite its running into a brick wall amid recriminations from all sides.

"We cannot think about any alternative and we should not have to think of it," Putin said at a press conference.

"It is impossible to create new plans without achieving elementary results for what we outlined in previous years."

Merkel last visited Russia in May 2015 when she met Putin in Moscow, and the two leaders have scaled back contacts as the Ukraine crisis has driven ties to a post-Cold War low.

Putin talked up economic ties between the two countries, insisting that "our cooperation makes a significant contribution to stabilising the world economy."

But it was clear that despite pledges to talk there remain deep gulfs between the German leader -- seen as a major bulwark of the Western liberal order -- and the Kremlin strongman, who many accuse of trying to undermine it.

At the press conference Merkel said she raised recent high-profile accusations of rights abuses in Russia, including allegations the authorities in Chechnya were rounding up gay men.

"We received very negative reports about how homosexuals are treated in Chechnya," Merkel said. "I asked President Putin to use his influence to guarantee the rights of minorities."

Ramzan Kadyrov, the Putin-loyalist and strongman leader of Chechnya, has fiercely denied claims of a crackdown in the socially conservative region, and after a delay Russian investigators said they are probing the allegations.

Putin was also forced to deny that Russia was planning to meddle in German elections that Merkel is competing in later in the year after claims that Moscow interfered with the US presidential vote.

The meeting with Merkel comes ahead of a busy diplomatic push for Putin.

After meeting Merkel, he was expected later Tuesday to hold his third phone call with US President Donald Trump.

The two leaders are looking to make headway on ties in the face of deep rifts over the conflict in Syria and after claims of Russian hacking during the US elections.

Turkish President Recep Tayyip Erdogan is also due to meet Putin in Sochi on Wednesday.

Putin and Erdogan have inched closer together on Syria as Erdogan's ties with Europe have deteriorated in recent months.