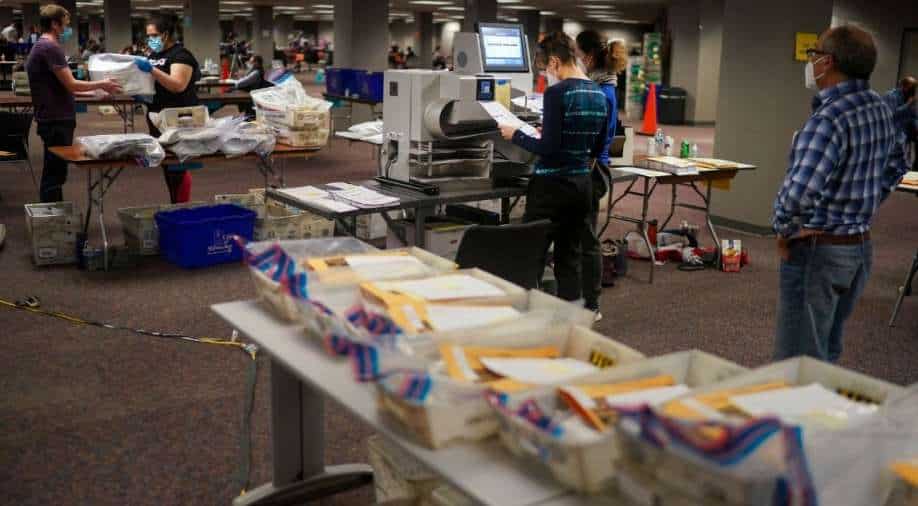 FILE -- Voting on Election Day in Milwaukee, Wis., Nov. 3, 2020. A memo received in November 2020 by a lawyer for the Trump campaign in Wisconsin, and another weeks later, are among the earliest known efforts to put on paper detailed proposals for readying alternate electors. (Chang W. Lee/The New York Times). Photograph:( The New York Times )

The memos show how just over two weeks after Election Day, Trump’s campaign was seeking to buy itself more time to undo the results

Fifteen days after Election Day in 2020, James R. Troupis, a lawyer for the Trump campaign in Wisconsin, received a memo setting out what became the rationale for an audacious strategy: to put in place alternate slates of electors in states where President Donald Trump was trying to overturn his loss.

The memo, from a lawyer named Kenneth Chesebro, may not have been the first time that lawyers and allies of Trump had weighed the possibility of naming their own electors in the hopes that they might eventually succeed in flipping the outcome in battleground states through recounts and lawsuits baselessly asserting widespread fraud.

But the Nov. 18 memo and another three weeks later are among the earliest known efforts to put on paper proposals for preparing alternate electors. They helped to shape a crucial strategy that Trump would embrace with profound consequences for himself and the nation.

The memos show how just over two weeks after Election Day, Trump’s campaign was seeking to buy itself more time to undo the results. At the heart of the strategy was the idea that the real deadline was not Dec. 14, when official electors would be chosen to reflect the outcome in each state, but Jan. 6, when Congress would meet to certify the results.

And in that focus on Jan. 6 lay the seeds of what became a pressure campaign on Vice President Mike Pence to accept the validity of a challenge to the outcome and to block Congress from finalizing Joe Biden’s victory — a campaign that would also lead to a violent assault on the Capitol by Trump supporters and an extraordinary rupture in U.S. politics.

“It may seem odd that the electors pledged to Trump and Pence might meet and cast their votes on Dec. 14 even if, at that juncture, the Trump-Pence ticket is behind in the vote count, and no certificate of election has been issued in favor of Trump and Pence,” the Nov. 18 memo said. “However, a fair reading of the federal statutes suggests that this is a reasonable course of action.”

Federal prosecutors and the House committee investigating the events of Jan. 6 have recently confirmed that they are examining the effort to submit alternate slates of electors to the Electoral College. On Friday, congressional investigators issued subpoenas to 14 people who claimed to be official Trump electors in states that were actually won by Biden.

The two memos, obtained by The New York Times, were used by Trump’s top lawyer, Rudy Giuliani, and others like John Eastman as they developed a strategy intended to exploit ambiguities in the Electoral Count Act, according to a person familiar with the matter.

The memos were initially meant to address Trump’s challenge to the outcome in Wisconsin, but they ultimately became part of a broader conversation by members of Trump’s legal team as the president looked toward Jan. 6 and began to exert pressure on Pence to hold up certification of the Electoral College count.

Neither Troupis nor Chesebro responded to requests for comment about the memos. Even before the memos were written, legislative leaders in Arizona and Wisconsin sought advice from their own lawyers about whether they had the power to alter slates of electors after the election took place and were effectively told they did not, according to new documents obtained by American Oversight, a nonprofit watchdog group.

Trump has long embraced the scheme. Just this past weekend, he issued a statement reiterating that he was justified in using the process in Congress on Jan. 6 to challenge the outcome and asserting that Pence “could have overturned the election.”

The plan to employ alternate electors was one of Trump’s most expansive efforts to stave off defeat, beginning even before some states had finished counting ballots and culminating in the pressure placed on Pence when he presided over the joint congressional session Jan. 6. At various times, the scheme involved state lawmakers, White House aides and lawyers like Chesebro and Troupis.

In the weeks after the election, Troupis oversaw the Trump campaign’s recount effort in Wisconsin, which ultimately showed that Biden had won by more than 20,000 votes. In early December 2020, Troupis filed a lawsuit on behalf of the Trump campaign that sought to invalidate the use of absentee ballots in Milwaukee and Dane counties, which both have large numbers of Black voters.

At a hearing in front of the Wisconsin Supreme Court, one justice, Rebecca Dallet, noted that Troupis had not sought to invalidate votes in Wisconsin's 70 other counties but had focused only on the “most nonwhite, urban” parts of the state. Another justice, Jill Karofsky, echoed that sentiment, telling Troupis that his lawsuit “smacks of racism.”

In late December, Chesebro joined Troupis in asking the U.S. Supreme Court to review the question of whether competing slates of electors in Wisconsin and six other contested states could be considered Jan. 6. The high court denied their request.

The language and suggestions in the memos from Chesebro to Troupis closely echo tactics and talking points that were eventually adopted by Trump’s top lawyers.

The November memo, for example, called Jan. 6 the “hard deadline” for settling the results of the election and advised that the Trump campaign had nearly two months for “judicial proceedings” to challenge the outcome. It also suggested that Trump-friendly electors in Wisconsin needed to meet in Madison, the state capital, on Dec. 14, 2020, the day the Electoral College would be voting.

The second memo was dated Dec. 9, 2020, and expanded on the plan. It set forth an analysis of how to legally authorize alternate electors in six key swing states, including Wisconsin. It noted that the scheme was “unproblematic” in Arizona and Wisconsin, “slightly problematic” in Michigan, “somewhat dicey” in Georgia and Pennsylvania, and “very problematic” in Nevada.

Rep. Pete Aguilar, D-Calif., a member of the committee investigating the Jan. 6 attack on the Capitol, said that the panel was examining the origins of the plans to put forward alternate electors. The panel already has in its possession memos that were written by Eastman and another Trump lawyer, Jenna Ellis, in late December 2020 and early January 2021; those memos laid out steps for Congress to take to cast aside Biden’s electors in key swing states.

“We know this was a coordinated effort on behalf of the former president and those around him to overturn a free and fair election,” Aguilar said. “We continue to learn new and more details. It’s incredibly troubling to know the lengths they went to support these efforts in multiple states.”

Aguilar said that he and others on the panel believed the plan to use the electors was connected to other aspects of Trump’s effort to remain in power, such as proposals to seize voting machines and to put intense pressure on Pence to throw out legitimate electoral votes.