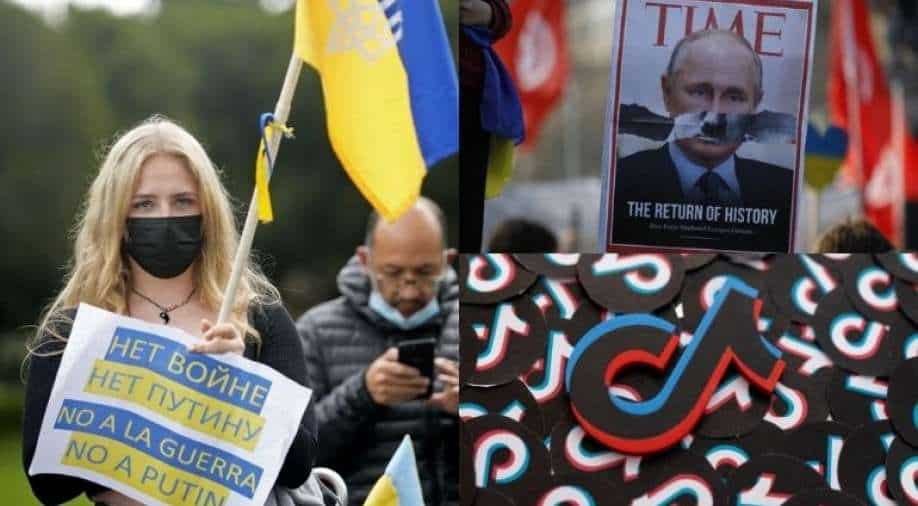 In this combination of images, protests against Russian President Vladimir Putin can be seen along with TikTok logos  Photograph:( Agencies )

Online misinformation researchers warned that false information about the Ukraine conflict were now mixed in with authentic ones and has spread widely on TikTok and other tech platforms including Meta Platforms's Facebook, Twitter and Alphabet Inc's YouTube.

Russian-controlled media outlets have come under fire as the West and its allies seek to crack down on misinformation about Moscow's onslaught on Ukraine.

Online misinformation researchers warned that false information about the Ukraine conflict were now mixed in with authentic ones and has spread widely on TikTok and other tech platforms including Meta Platforms's Facebook, Twitter and Alphabet Inc's YouTube.

In 2014, Russia flooded the internet with fake accounts pushing disinformation about its takeover of Crimea. Eight years later, experts say Russia is mounting a far more sophisticated effort as it invades Ukraine.

A post shared by Stand With Ukraine 🇺🇦 (@withukraine)

In the cat video, a husky puppy identified by a digitally inserted US flag swipes at the tail of a tabby identified by a Russian flag. The cat responds with a ferocious jab that sends the hapless dog scurrying. The clip, which has been viewed 775,000 times in two weeks, is the work of an account named Funrussianprezident that boasts 310,000 followers. Almost all of its videos feature pro-Russian content.

The effort amounts to an emerging part of Russia’s war arsenal with the shaping of opinion through orchestrated disinformation fighting alongside actual troops and weapons.

“This is the way they go to war; it’s a central part of Russian doctrine,” said Jim Ludes, a former US defence analyst who now directs the Pell Center for International Relations and Public Policy at Salve Regina University. Ludes said Russian disinformation campaigns are intended to galvanise Russian support while confusing and dividing the country’s opponents.

Video of Ukrainian father saying goodbye to his kids while he stays behind to fight.

For Russians and pro-Russian separatists in Ukraine, the message is that Russia is trying to defend its own people against Western-fueled aggression and persecution in Ukraine. Similar tactics have been used, including by Nazi Germany when it invaded Czechoslovakia under the guise of protecting ethnic Germans living there, Ludes noted.

Web monitoring group NetBlocks has reported a series of significant disruptions to internet service in Ukraine since the Russian invasion began.

Meanwhile, the US has information indicating Russia is publicising false reports about widespread surrenders of Ukrainian troops and claims that Moscow plans to “threaten killing family members of Ukrainian soldiers if they do not surrender,” according to State Department spokesman Ned Price.

Russia has also employed cyberattacks in its invasion of Ukraine, and while they pose a serious threat, online propaganda can leave even more lasting damage if it succeeds, according to retired Army Lt. Gen. Michael Nagata, a former director of strategic operational planning at the US National Counterterrorism Centre.

“What is far more dangerous is Russia’s ability to influence what populations everywhere believe,” Nagata said. “To get them to believe things that are useful for Russian strategic interests... If you’re able to change what an entire population believes, you may not have to attack anything.”

Breaking. #ESETResearch discovered a new data wiper malware used in Ukraine today. ESET telemetry shows that it was installed on hundreds of machines in the country. This follows the DDoS attacks against several Ukrainian websites earlier today 1/n

In the West, Russia seeks to sow division and reduce the chances of a unified international response. It does this in part through a stable of state-controlled media outlets such as Sputnik and RT, which published in English, Spanish, and several other languages.

The European Union banned Kremlin-controlled media outlets RT and Sputnik from broadcasting into the bloc.

Russia's invasion of Ukraine, which it has called a "special operation," is the latest example of the central role TikTok has played in bringing news and current events to the app's large Gen Z audience.

Its famed algorithm is known for serving trending content even if users do not follow certain people, allowing topics to quickly go viral among its 1 billion monthly users.