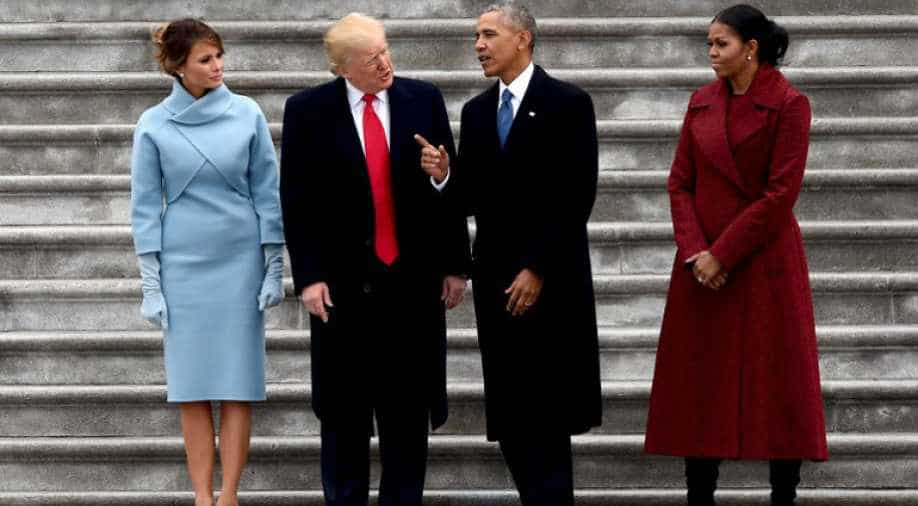 Her cashmere turtleneck dress fell to her knee, paired with a cross-over jacket cropped to the waist and matching suede gloves. In a break from the past, Melania wore her hair swept up with diamond stud earrings.

A Ralph Lauren spokeswoman confirmed to AFP that Trump was wearing a custom-made Ralph Lauren collection dress, jacket and gloves.

The 46-year-old former model originally from Slovenia, is America's only second foreign-born first lady since England's Louisa Adams, wife of John Quincy Adams, who was president from 1825 to 1829.

Ralph Lauren is perhaps America's most iconic living designer, a 77-year-old master inspired by European sensibilities but whose clothes define a uniquely American sense of elegance.

A string of designers have refused to work with Trump because of her husband's politics, making her sartorial debut as first lady -- hot on the heels of the much-loved Michelle Obama -- closely scrutinized.

Despite being criticized for previously favoring high-end European clothes and foregoing Obama's winning combination of US high street meets high fashion, Trump is proving herself an adroit dresser.

On Friday she picked a little-known New York designer of Hispanic descent and daughter of a wounded veteran to design her military-inspired, black coat to visit the National Arlington Cemetery.

While commentators griped about her heavy sunglasses and grumpy demeanor, in the evening she donned a stunning golden gown from Reem Acra, a Lebanese-born American designer, for a candlelight dinner.

Her looks have not only been appropriate to the moment but given a nod toward inclusivity at a time when her husband is under attack for divisive rhetoric and threat to deport up to three million illegal immigrants.

But Trump will have to work hard to keep up with 35-year-old stepdaughter Ivanka, widely feted for her elegance and who unlike Melania is moving straight to Washington with her husband, an incoming White House advisor.