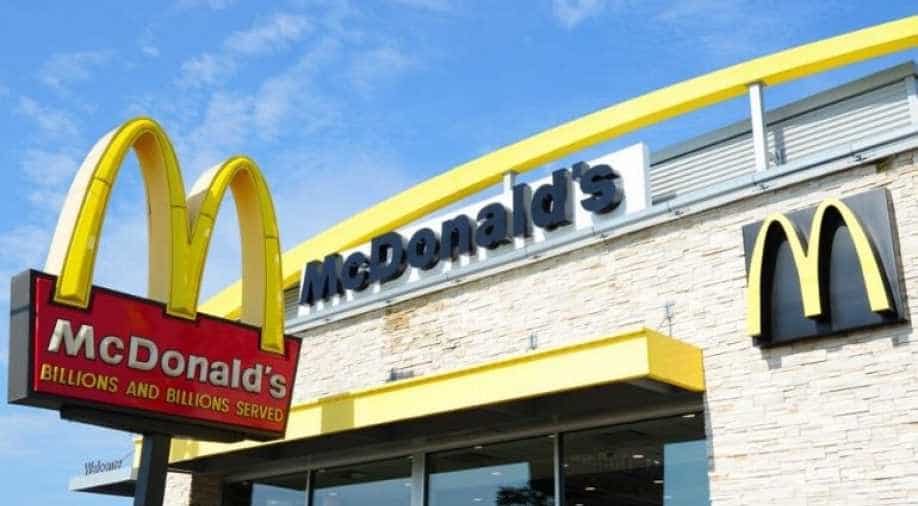 File photo: In this file photo the McDonald's restaurant is seen September 10, 2016, in Gettysburg, Pennsylvania. An international group of labour unions said May 18, 2020, it has filed a lawsuit against McDonald's for "systemic sexual harassment" at the fast-food chain's restaurants around the world. Photograph:( AFP )

McDonald's said it had subsequently learned that Easterbrook lied 'and destroyed information regarding inappropriate personal behavior' and relationships with three other employees.

McDonald's sued former CEO Steve Easterbrook for allegedly lying about inappropriate sexual relationships with employees Monday, the latest twist in a corporate #MeToo saga that has rocked the fast-food giant.

Easterbrook -- who is British -- was dismissed in November 2019 over his "poor judgment" in engaging in a consensual relationship with a member of staff in violation of company policy.

McDonald's said it had subsequently learned that Easterbrook lied "and destroyed information regarding inappropriate personal behavior" and relationships with three other employees.

It added that the 53-year-old had provided stock worth hundreds of thousands of dollars to one of those employees.

The chain is seeking to recover compensation and severance benefits paid to the executive under the terms of his departure last year, according to a securities filing.

The lawsuit, which alleges that Easterbrook committed fraud by misleading the company over the separation agreement, has been filed in a state court in Delaware.

"(He) was knowingly untruthful with McDonald's investigators," says the complaint, which also shed new light on the relationship that led to his departure.

It had been "a non-physical, consensual relationship involving texting and video calls," the filing says.

But in July this year, McDonald's received an anonymous tip-off that Easterbrook had engaged in a sexual relationship with someone who worked for him while he was CEO.

An internal investigation found evidence of that relationship, and of two others, McDonald's said.

"That evidence consisted of dozens of nude, partially nude, or sexually explicit photographs and videos of various women, including photographs of these company employees," the filing says.

It adds that Easterbrook had sent the photographs, which were allegedly taken in late 2018 and early 2019, as attachments to messages from his company e-mail account to his personal e-mail account.

Easterbrook, who was appointed CEO in March 2015, was widely credited with boosting the burger chain's fortunes.

In 2018, his base pay was $1.3 million and his total compensation including bonus and stock options was $15.9 million.

Equilar, a compensation consulting firm, has estimated his exit package at around $40 million.

Easterbrook was replaced by Chris Kempczinski, who joined McDonald's in October 2015 after working in a senior strategic role at Kraft Foods and previously at PepsiCo.

One day after Easterbrook's departure, McDonald's announced that its top human resources executive, David Fairhurst, who joined McDonald's in 2005 and was named chief people officer at the restaurant chain in 2015, had also left.

In May, an international group of labor unions filed a complaint against McDonald's for what it called systematic sexual harassment at the fast food chain's restaurants around the world.

The complaint, filed with the Dutch national contact point for the Organization for Economic Cooperation and Development (OECD), was the first of its kind to target a multinational company, the International Union of Foodworkers said.

McDonald's said at the time it would review the complaint, stressing that the food giant was a "people-first company."

Its shares fell by 0.60 per cent following Monday's lawsuit announcement.