May, Corbyn spar over Brexit in TV grilling 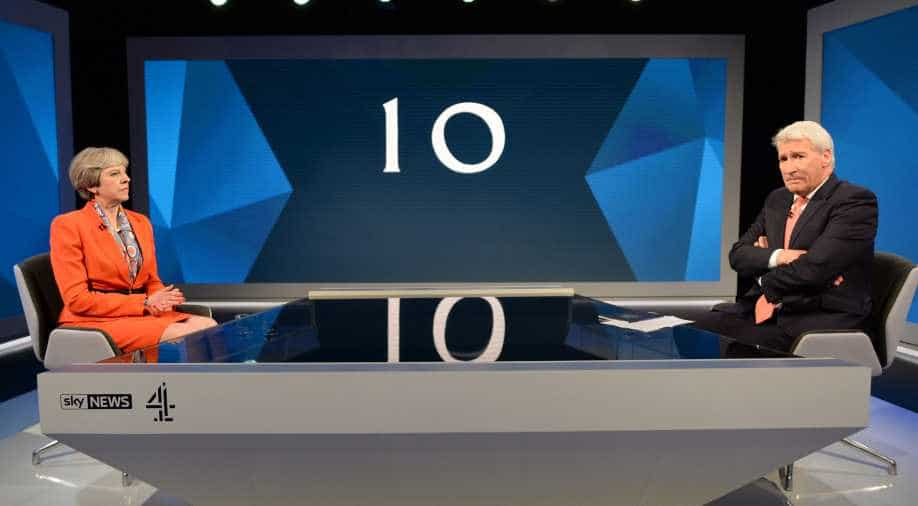 British Prime Minister Theresa May (L) waits to be interviewed by Channel 4?s Jeremy Paxman (R) during the "May v Corbyn Live: The Battle for Number 10", Sky News and Channel 4 event in at Sky Studios. Photograph:( AFP )

Britain's Prime Minister Theresa May and Labour leader Jeremy Corbyn took diverging tacks over Brexit negotiations on Monday as they faced a live televised grilling ahead of June's general election.

Ten days before the snap polls on June 8, the two rivals separately faced wide-ranging questions from members of the public before interrogations by veteran bulldog broadcaster Jeremy Paxman.

May declined a face-to-face debate with Corbyn, whose opposition party has in recent days narrowed the gap in opinion polls, though the ruling Conservatives remain in front.

While Corbyn insisted he would "make sure there's a deal" with the European Union before Britain leaves the bloc, May said she was "prepared to walk out".

"No deal is better than a bad deal," the 60-year-old prime minister repeatedly said in the Sky News/Channel 4 "Battle for Number 10" broadcast.

"We have to be prepared to walk out," the premier insisted, noting that some people in Europe were "talking about punishing us".

Her 68-year-old rival Corbyn said the "reality" of last year's Brexit referendum result had to be respected and insisted: "We will make sure there's a deal".

"We won't start the negotiations with megaphone diplomacy, threatening Europe with some kind of offshore tax haven on the shores of Europe," he said in a dig at May's efforts to handle Brexit.

Both candidates officially supported staying in the EU before the referendum held last June, which saw 52 percent of British voters opt to leave the bloc.

Formal talks on Britain's withdrawal are due to start on June 19, just 11 days after the general election.

May triggered Article 50 -- the formal procedure for leaving the EU -- in late March, opening a two-year timetable for negotiations before withdrawal.

Security was also high on the agenda on Monday, in the wake of the Manchester suicide bombing a week ago which saw 22 people killed and led to brief suspension in political campaigning.

May, who was at times heckled by the audience during the televised questioning, was asked by a serving policeman about "devastating" cuts to police numbers during her six-year tenure as interior minister.

She said the government had had to ensure Britain was "living within our means" given "the economic situation we had inherited".

She said budgets were currently being protected for both counter-terrorism forces and overall policing.

Corbyn meanwhile was grilled over his controversial relationship with the Irish Republican Army, nuclear deterrence and whether he would abolish the monarchy, given his republican stance.

"It's not on anybody's agenda, it's certainly not on my agenda and, do you know what, I had a very nice chat with the Queen," he said.

Nigel Farage, former leader of the UK Independence Party and a leading Brexit campaigner, said in a surprise tweet that Corbyn came across in the broadcast as being "totally sincere", although he did not agree with him.

"Saying 'no deal is better than a bad deal' 4 times will win May the election. But she is a weathercock who believes in very little," Farage said.