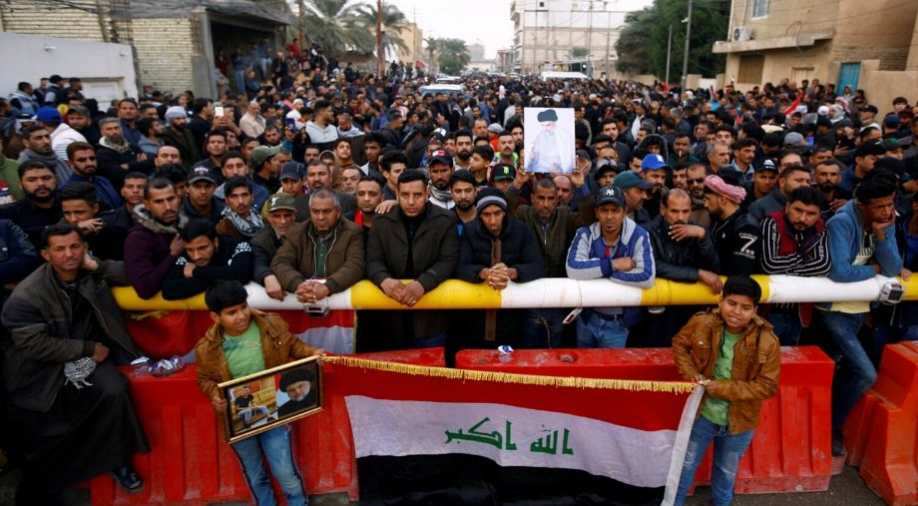 Supporters of Iraqi Shi'ite cleric Moqtada al-Sadr gather near his home, after it was attacked, in the holy city of Najaf, Iraq. Photograph:( Reuters )

Massive protests continued in Iraq's capital city Baghdad and its southern region on Sunday as thousands of demonstrators gathered around streets and public squares undeterred by the use of violence to "scare" them.

In capital city Baghdad, massive anti-regime demonstrators thronged Tahrir Square on Sunday, one of the central points of the movement.

The support for the movement has risen despite the incident of violence on Friday.

"They're trying to scare us in whatever ways they can, but we're staying in the streets," said a 23-year-old protester.

In Nasiriyah, protesters gathered along with representatives of influential tribes at a place where dozens of demonstrators were killed last month.

"We will keep protesting until the regime collapses," a student said.

In other southern cities in Iraq, Sunday, the first working day in Iraq, was declared as a public holiday for civil servants. Roadblocks and strikes affected work in Hilla, Amara, Diwaniya, Kut and the shrine city of Najaf.

The unrest in Iraq intensified on Saturday when an armed drone attacked the home of Iraqi cleric Moqtada Sadr.

Sadr, who earlier backed the current government, has shown his solidarity with the protesters.

Sadr's supporters also condemned Friday's attack, claiming that he was safe and in Iran when his home was attacked.

More than two months have passed since the protests first began in Iraq over issues such as corruption and unemployment, among others, killing more than 400 people and injuring nearly 20,000.

The discontent remained despite the resignation of Iraqi prime minister Adel Abdul Mahdi, as protesters demand a complete change in the political system.

Iraq is the world's 12th most corrupt country as per a report by the watchdog group Transparency International.