Many in Hong Kong, fearful of China's grasp, flee to Taiwan 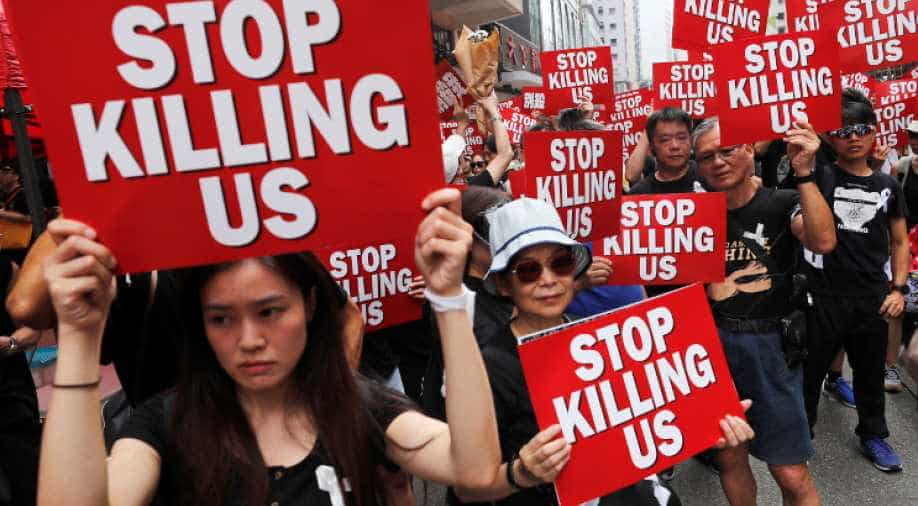 Hong Kong has been governed under a 'one country, two systems' formula since its return from British to Chinese rule in 1997, allowing it certain freedoms, including an independent judiciary.

For Hong Kong resident Yung Xiu Kwan, 67, a proposed extradition law that would allow people in the former British colony to be sent to mainland China for a trial was the final straw.

Yung is packing her bags and leaving the Chinese-ruled city to set up a new life in proudly democratic Taiwan, fed up with what she sees as Beijing's ever-encroaching grip over the city that has led to an erosion of civil liberties.

"Without freedom and democracy, it's like being put in jail, like living in a concentration camp ... without freedom, (I) would rather die," said Yung, as she waved a Taiwan flag at a massive protest in Hong Kong on Sunday.

"Taiwan can offer that because Taiwan has democratic elections and a constitution that safeguards democracy."

Hong Kong has been governed under a "one country, two systems" formula since its return from British to Chinese rule in 1997, allowing it certain freedoms, including an independent judiciary. Courts in mainland China are controlled by the Communist Party.

Yung is joining thousands of people who have left for Taiwan in recent years, citing fears of Chinese erosion of one country, two systems, a concept Beijing hopes it can introduce one day in Taiwan.

Beijing has never renounced the use of force to take over neighbouring, self-ruled Taiwan, which it regards as a recalcitrant, breakaway province.

While Hong Kong leader Carrie Lam indefinitely suspended the extradition bill, protest organisers said about two million people still took to the streets on Sunday to call for a full withdrawal and to demand Lam step down.

Some Hong Kong tycoons have started moving personal wealth offshore amid concerns over the legislation.

The Hong Kong protests, which saw police use rubber bullets and tear gas, were the most violent to rock the city in decades and marked the biggest challenge the financial hub has posed to Chinese President Xi Jinping since he came to power in 2012.

Taiwan, overwhelmingly opposed to a "one country, two systems" formula for itself, has voiced support for Hong Kong. It has remained defiant amid escalating Chinese pressure, with many resolutely rejecting Beijing's call for "reunification".

The extradition bill is the latest in a string of issues that have troubled ties between Hong Kong and Beijing, with Hong Kong people increasingly upset by an inflow of Chinese immigrants and sky-high property prices partly pushed by mainland investors.

Many accuse China of extensive meddling, including obstruction of democratic reforms, interference with elections and of being behind the disappearance of five Hong Kong-based booksellers, starting in 2015, who specialised in works critical of Chinese leaders.

Chan, 30, who declined to give his full name, said the rapid pace of Beijing's encroachment on Hong Kong's civil liberties had taken him by surprise.

"It's like there's a burglar in my house and I'm the one who's forced to leave because I couldn't defeat him," said Chan, who moved to Taiwan in 2016 and is planning to arrange for his parents to retire there.

The number of people granted Taiwan residency from Hong Kong and neighbouring Macau, a former Portuguese-run enclave also given special autonomy under Chinese rule, had more than doubled to 1,267 in 2018 from a decade ago, official data shows.

The trend spiked in the two years following massive protests calling for full democracy in 2014 that paralysed parts of Hong Kong for months. And it shows no signs of abating. There were around 400 such immigrants to Taiwan in the first four months of 2019, a 40% jump from a year ago.

"I'm moving to Taiwan with my wife next year," said Melvin Chu, a Hong Kong resident in his late 20s who joined Sunday's rally, citing worries over political freedoms.

"Things are getting worse in Hong Kong. We are worried for the next generation."

Some Hong Kong youth are so desperate to leave they have opted to join Taiwan's compulsory military service for men under 36 in a bid to get residency, which comes at a price tag of HK$1.5 million ($191,600).

Taiwan politicians have wasted no time in showing their support for Hong Kong amid a heated presidential race in which candidates' policies towards China are closely examined.

Seeking a second term, President Tsai Ing-wen has repeatedly urged the Hong Kong government to respect the people's will, while sounding the alarm over Beijing's "trap" to absorb Taiwan.

Foxconn chairman Terry Gou, seeking an opposition party's presidential nomination, promised to "open his arms" to Hong Kong immigrants looking to find "a new home for democracy and freedom" if he became Taiwan's next president.

"It's a democratic beacon for Hong Kong," Cheng Chung-man, a 32-year-old who works for a lawmaker in Hong Kong's Legislative Council, told Reuters of Taiwan at Sunday's rally.