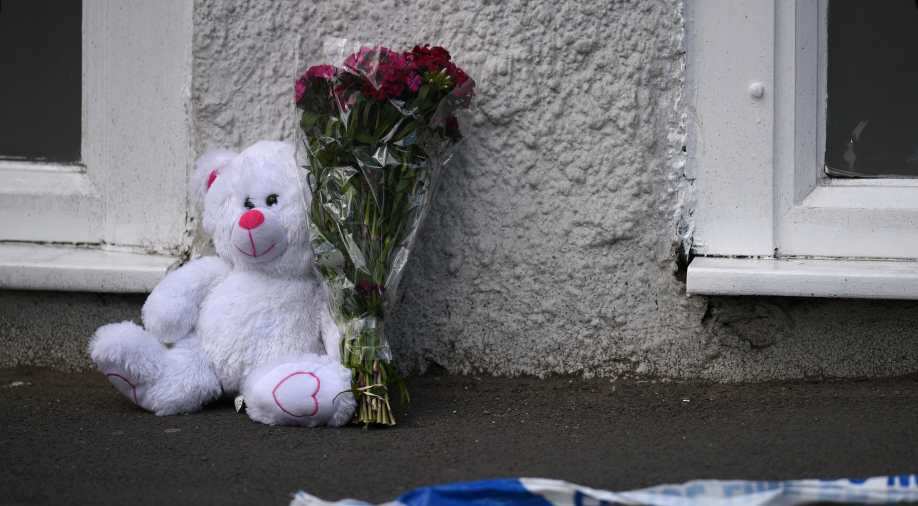 Children were among the 22 victims who were killed in the pop concert attack. In photo: A teddy mark and a bouquet are kept outside a Manchester house to offer condolence to those who suffered in the suicide attack. Photograph:( AFP )

World leaders led by US President Donald Trump today expressed outrage over the terror attack in Manchester in which at least 22 people were killed and vowed to work together to fight the scourge.

Trump, who was in Bethlehem where he was meeting Palestinian counterpart Mahmoud Abbas, said: "I extend my deepest condolences to those so terribly injured in this terrorist attack and to the many killed."

He said "evil losers" and a "wicked ideology" were responsible.

"This wicked ideology must be obliterated and I mean completely obliterated and the innocent life must be protected. All civilised nations must join together to protect human life and the sacred right our citizens to live in safety and in peace," he said.

Queen Elizabeth II also condemned the attack as an "act of barbarity", voicing sympathy for victims and emergency workers.

"The whole nation has been shocked by the death and injury in Manchester," the queen said in a statement, adding: "I would like to express my admiration for the way the people of Manchester have responded, with humanity and compassion, to this act of barbarity".

At least 22 people, including children, were killed and 59 others injured when a suicide bomber blew himself up as thousands of fans were exiting US star Ariana Grande's pop concert in Manchester.

France's new President Emmanuel Macron offered his sympathies to the British people and said: "We are fighting terrorism together."

"We strongly condemn this cynical, inhumane crime. We hope that its masterminds will not escape the punishment they deserve," he said.

German Chancellor Angela Merkel said: "This suspected terrorist attack will only strengthen our resolve to continue to work together with our British friends against those who plan and carry out such inhumane deeds."

European Commission President Jean-Claude Juncker said it "breaks my heart" that terrorism once again sought to "instill fear where there should be joy".

"These cowardly attacks will only strengthen our commitment to work together to defeat the perpetrators of such vile acts," he said.

"Terror is a global threat and the enlightened countries must act together to defeat it in any place," he said.

Australian Prime Minister Malcolm Turnbull said the attack was "especially vile, especially criminal, especially horrific because it appears to have been deliberately directed at teenagers."

"Australia stands with Britain in resolute solidarity. Partners in freedom's cause, tireless in our defence of our people's safety and their liberty. Our nations will never give in to terror".

Canadian Prime Minister Justin Trudeau tweeted: "Canadians are shocked by the news of the horrific attack in Manchester tonight."

Japanese Prime Minister Shinzo Abe condemned the attack and said he was "deeply shocked" that "this appalling act of terrorism".

"On behalf of the government of Japan and the Japanese people, I would like to express my heartfelt condolences to the victims and extend our sympathies to those who have been injured," he said.

In a statement, a Chinese foreign ministry spokeswoman said: "The Chinese government feels shocked and is filled with sorrow over the explosion that has occurred in Manchester."

Chinese President Xi Jinping said: "The Chinese people are firmly standing together with the British people at this difficult time."

Malaysian Prime Minister Najib Razak, said he was appalled by the "barbaric and cowardly attack on innocent concertgoers".

"At this time of heartbreak, Malaysia stands united with Britain. We must be firm, determined and ready to confront terror swiftly and decisively wherever and whenever it manifests itself. We must never surrender," Najib said.

NATO Secretary General Jens Stoltenberg said: "#NATO stands with the UK in the fight against terrorism."