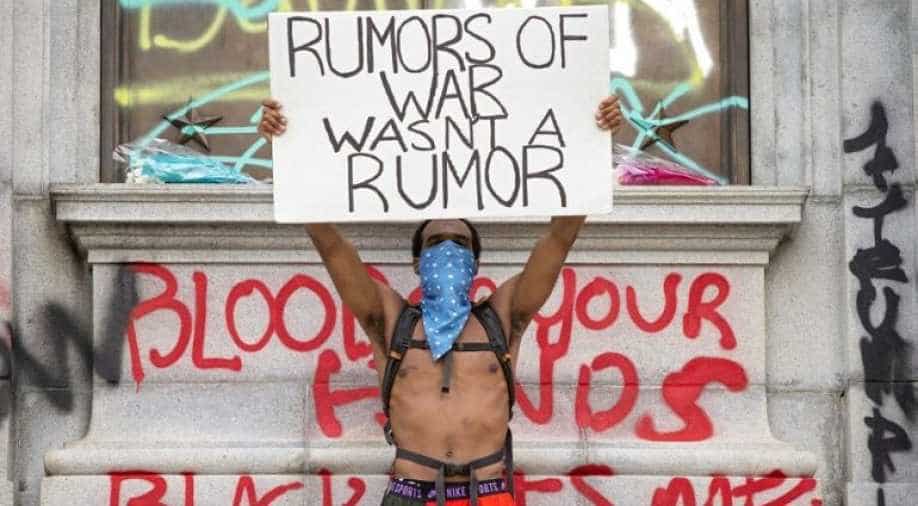 A man holds up a sign as people gather around the Robert E. Lee statue on Monument Avenue in Richmond, Virginia, on June 4, 2020 Photograph:( AFP )

The 36-year-old has been officially charged with attempt to wounding, vandalism, and assault and battery.

A man who recently drove his car through a score of protesters in the US state of Virginia is a “leader of the Ku Klux Klan”.

Henrico Country Commonwealth’s Attorney recently told CNN that the man, Harry Rogers, is “an admitted leader of the KKK” and that he is also a “propagandist for Confederate ideology”.

The 36-year-old has been officially charged with attempt to wounding, vandalism, and assault and battery. According to media reports, he is being held without a bond. The man appeared in court on Monday, and will next appear on August 18.

As per details divulged by the Henrico Country Police Division,  during a protest in Richmond against police brutality and the murder of George Floyd by the police, a man sped up towards protesters. This handout mugshot obtained courtesy of the Henrico Sheriff's Department shows the booking photo of Harry Rogers in Henrico County, Virginia. Rogers,36, of Hanover, Virginia, was formally charged with attempted malicious wounding, destruction of property and assault and battery after he drove his pickup truck into a group of protesters on June 6, 2020 in Lakeside, Virginia. | AFP

The protest, part of the larger Black Lives Matter protests that have spurred across the globe, has brought US cities to a standstill, with outraged people asking for justice. All four officers involved in the murder have been charged, with Chauvin, the officer directly responsible for his death, facing third-degree murder charges with a bail set at $1 million.

According to the police, a vehicle had "revved their engine and drove through the protesters occupying the roadway”.

Even though no harm was caused to anyone in the protests, this reflects another anti-protest sentiment in the US. On Monday, a man rammed his car into protesters in the US city of Seattle, and then shot a bystander who suffered injuries in his arm. He later on surrendered to the police.

Similarly, Rogers was arrested and a victim suffered minor injuries, who also reportedly refused treatment when emergency services arrived on the scene.

"While I am grateful that the victim's injuries do not appear to be serious, an attack on peaceful protesters is heinous and despicable and we will prosecute to the fullest extent of the law," Shannon Taylor, Henrico County Commonwealth's Attorney admitted in a statement.

Rogers may be charged with hate crime, given his affiliation with the Ku Klux Klan, which a hate group advocating white supremacy, with African Americans being its primary targets.