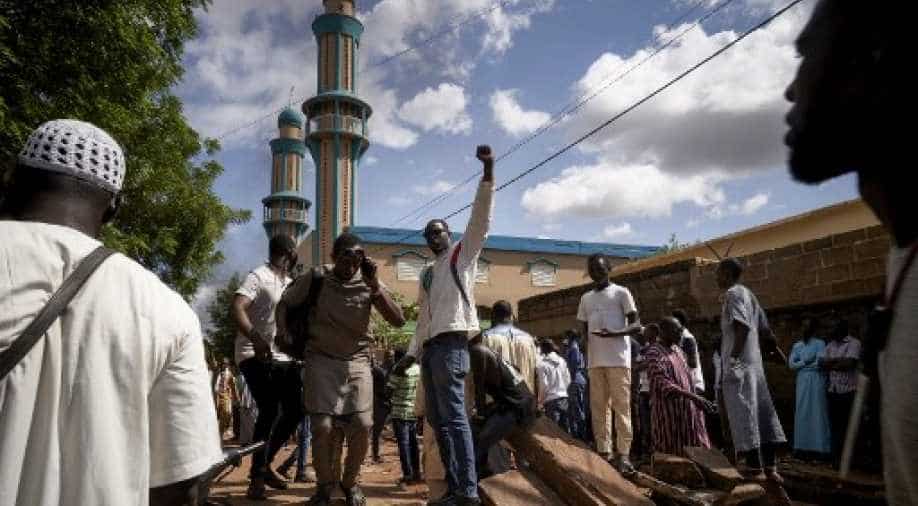 Protesters gestures on a barricade put up in front of the Salam mosque of Badalabougou, where the influent Imam Mahmoud Dicko led a prayer dedicated to the victims of the clashes of the past two days in Bamako on July 12, 2020. Photograph:( AFP )

Now, to calm the protesters, Keita has dissolved the controversial court that ruled in his favour but the protest hasn't stopped.

In Mali, a mosque is at the heart of the country's worst civil unrest in years. Over the weekend security forces launched several assaults. First, they fired gunshots in the air and then unleashed tear gas. Their objective was to kill imam Mahmoud Dicko who is the leading figure of the opposition movement.

The mosque was surrounded by spent bullet shells, rubble and the remains of torched tires. Six people were shot dead at the site while Dico managed to escape. Hundreds of opposition leaders have been detained. The capital Bamako is a scene of war and President Ibrahim Boubacar Keita's forces are firing at will. The security forces have killed at least 11 protesters. The demonstrations first broke out on June 5th as people called for Keith's resignation.

They were angered by the long-running jihadist movement, economic woes and corruption. The parliamentary election turned peaceful protests into public outrage. A court overturned the results for about 30 seats. This move helped several members of Keita's party get elected, when in fact they had lost the election. The protests that followed put Keita under immense pressure. Protesters pelted the national assembly with rocks and shattered its glass facade. They also ransacked and set fire to parts of the building. Keita sent the security forces to restore peace, but the killings led to a surge in clashes.

Now, to calm the protesters, Keita has dissolved the controversial court that ruled in his favour but the protest hasn't stopped. The movement has grown into something bigger. Religious, political and civil society leaders have come together, calling for wider reforms, starting with Keita's resignation.

The 75-year old president has been in power since 2013. He has struggled to contain an Islamist insurgency that first emerged in the north in 2012. It quickly spread across the country and to neighbouring Burkina Faso and Niger. It is Keita's biggest failure as president.

Despite having the support of more than 13,000 international peacekeeping forces in Mali, more than 600 civilians have been killed this year alone. The militants have forced farmers off their land. The lack of food and fear of militant attacks has forced at least 250,000 people to flee their homes.

Over five million people will need aid to survive in the coming months. The political crisis is worsening the severe humanitarian crisis. International and regional blocs have condemned Keita's methods. Political turmoil in Mali could undermine the global campaign against Islamist insurgents in West Africa's Sahel region. So, it is not just the people who have lost faith in Keita. Now, the call for his resignation will only ring louder.