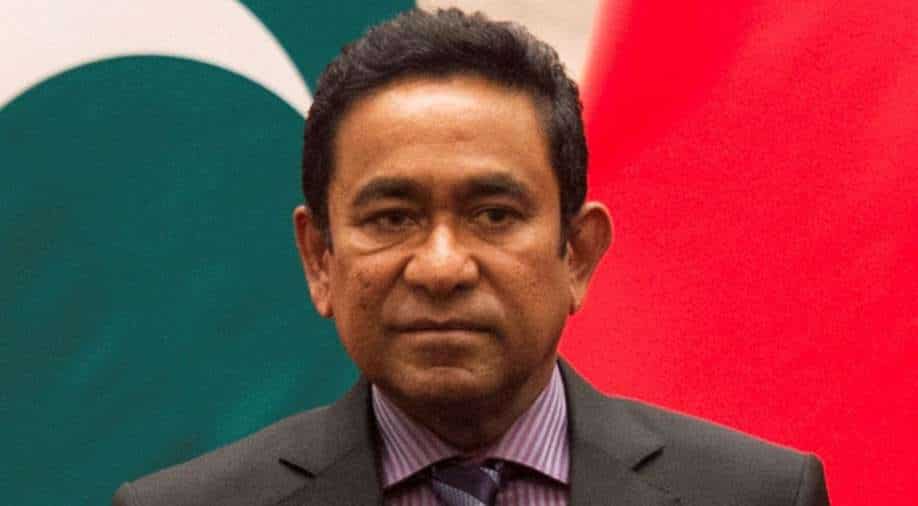 This is a file photo of Abdulla Yameen . Photograph:( Reuters )

After an appeal by Yameen, a three-member Supreme Court bench ruled on Tuesday there was insufficient evidence in the original case

Maldives' former president Abdulla Yameen was freed from house arrest on Tuesday after a top court overturned a money-laundering and embezzlement conviction, allowing him to potentially make a return to politics.

Yameen was sentenced to five years in jail and fined $5 million in 2019 for embezzling $1 million in state funds, allegedly acquired through the lease of resort development rights, and laundering the proceeds. Because of COVID-19, his jail term was shifted to house arrest.

After an appeal by Yameen, a three-member Supreme Court bench ruled on Tuesday there was insufficient evidence in the original case.

Two previous appeals at lower courts had been rejected.

Hundreds of supporters of Yameen's Progressive Party of Maldives gathered outside his residence in the capital Male after the verdict was announced.

The overturning of the verdict is a key moment in Maldives' often-turbulent politics, as Yameen is now free to conduct political activities and even contest the next presidential election.

Yameen, who served as Maldives' president from 2013 to 2018, is best known for drawing the country closer to China, invoking the ire of traditional ally India.

He played a major role in ousting the archipelago's first democratically elected president, Mohamed Nasheed, who fled into exile before returning in 2018 when Yameen unexpectedly lost power in a national election.