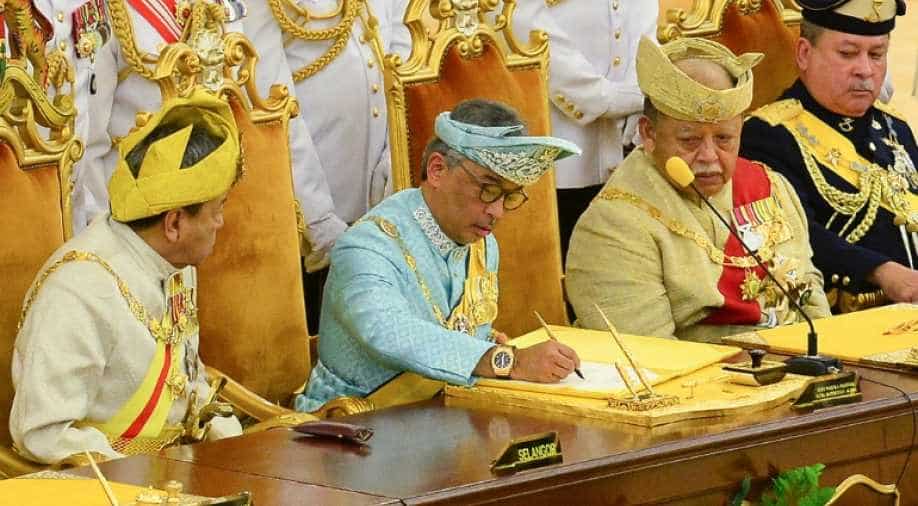 Sultan of Pahang Al-Sultan Abdullah signing a document after taking the oath at the National Palace in Kuala Lumpur, January 31, 2019. Photograph:( Agencia EFE )

The ceremony was attended by other eight Sultans of the country, four non-royal governors of other states and members of the government.

The Sultan of Pahang, Tengku Abdullah, ascended the throne as the 16th king of Malaysia on Thursday after his predecessor, Sultan Muhammad V, suddenly abdicated earlier this month.

Abdullah, 59, took the charge to be the king - Malaysia's head of state - for the next five years at the National Palace in Kuala Lumpur, the official residence of the monarch.

The ceremony was attended by other eight Sultans of the country, four non-royal governors of other states and members of the government.

Prime Minister Mahathir Mohamad officiated during the oath-taking ceremony and the Mufti, a head priest, recited prayers seeking blessings for the nation and the king, Malaysia's Bernama news agency said.

At the ceremony, the Sultan of Perak, Nazrin Shah, 62, was also sworn in as the vice minister of the state and will serve for the next five years.

Malaysia practices the system of a constitutional monarchy. According to its constitution, the king, who represents the country at official events, is elected every five years from among the nine Sultans on a rotational basis.

The system has been in practice since Malaysia's independence from the United Kingdom in 1957 but the lineage of sultans dates back to Malay Sultans of the 15th century.

The king, also the commander-in-chief of the Malaysian Armed Forces, is revered as the patriarch of the Malay ethnic group by Malay Muslims, who represent 60 per cent of the country's population.

Abdullah, who replaced his ailing father as the Sultan of Pahang in mid-January, was elected as the king of Malaysia by the council of Sultans and governors on January 24.

The father, Ahmad Shah, 88, had been reported unwell and had agreed to give way to his eldest son to be the Sultan of Pahang and subsequently the king of Malaysia.

Shah reigned for 45 years as the Sultan of Pahang, including a stint as Malaysian King from 1979 to 1984.

As the king of Malaysia, Abdullah succeeds Sultan Muhammad V, the Sultan of Kelantan, who stepped down on Jan 6 after having reigned for just over two years of the five-year term from Dec 13, 2016. Muhammad V, 49, abdicated without giving any reasons.

The king's resignation followed his marriage to 25-year-old Russian beauty queen Oksana Voevodina in a ceremony in Moscow in November 2018.