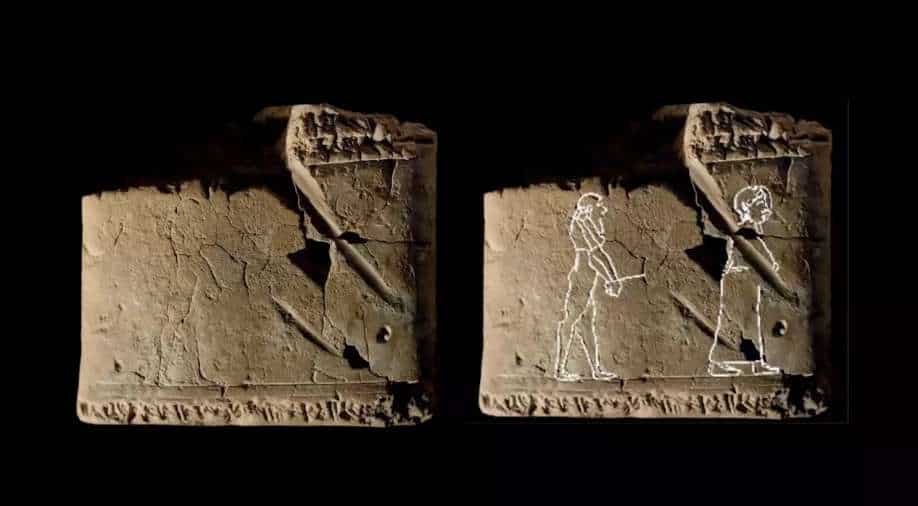 The Babylonian clay tablet had been sitting idle in the museum vaults since the 19th century. Photograph:( Others )

A lonely bearded spirit being led into the afterlife and eternal bliss by a lover has been identified on an ancient Babylonian clay tablet created about 3,500 years ago was recently identified by the researchers

The world's oldest ghost drawing of a ghost on an ancient Babylonian clay tablet was recently discovered at the British Museum.

A lonely bearded spirit being led into the afterlife and eternal bliss by a lover has been identified on an ancient Babylonian clay tablet created about 3,500 years ago was recently identified by the researchers.

According to the Guardian, the Babylonian clay tablet had been sitting idle in the museum vaults since the 19th century.

Dr Irving Finkel, curator of the Middle Eastern department at the British Museum, told the Guardian that the “absolutely spectacular object from antiquity” had been overlooked until now.

“It’s obviously a male ghost and he’s miserable. You can imagine a tall, thin, bearded ghost hanging about the house did get on people’s nerves. The final analysis was that what this ghost needed was a lover,” he was quoted as saying.

“You can’t help but imagine what happened before. ‘Oh God, Uncle Henry’s back.’ Maybe Uncle Henry’s lost three wives. Something that everybody knew was that the way to get rid of the old bugger was to marry him off. It’s not fanciful to read this into it. It’s a kind of explicit message. There’s very high-quality writing there and immaculate draughtsmanship.

“That somebody thinks they can get rid of a ghost by giving them a bedfellow is quite comic.”

The drawing depicts an exorcist’s guide to getting rid of unwanted ghosts by addressing the particular malaise that brought them back to the world of the living – in this case, a ghost in desperate need of a companion.

He is shown walking with his arms outstretched, his wrists tied by a rope held by the female, while an accompanying text details a ritual that would to dispatch them happily to the underworld.

Finkel said he believes the tablet was part of a “library of magic in the house of an exorcist or in a temple.”

The tablet has never been publicly displayed by the museum, but Finkel told the Guardian he hopes to change that. “I want people to know about this culture. Egypt always wins in Hollywood. If the Babylonian underworld is anything like it was described, then they’re all still there. So just remember that,” he said.