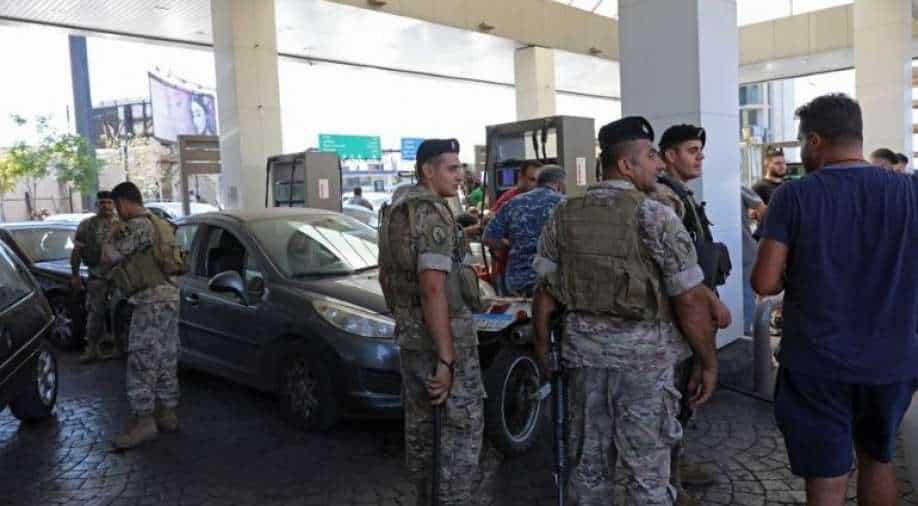 Lebanese soldiers are pictured at a petrol station in the capital Beirut on August 14, 2021, after soldiers were deployed to force several stations to reopen their doors. Photograph:( AFP )

According to the World Bank, Lebanon is experiencing one of the worst economic crises since the 1850s and is suffering from shortages of fuel, bread, and medicine

Lebanon is gripped by one of the world's worst economic crises since the 1850s, according to the World Bank, and is struggling with fuel, bread and medicine shortages.

On Wednesday central bank chief Riad Salameh said he would halt state subsidies on fuel imports to ease pressure on the bank's dwindling foreign reserves, sparking panic across the country.

Saturday Salameh insisted he would not back down from his decision without a parliamentary vote, saying foreign reserves had fallen to $14 billion.

"I will not review the removal of subsidies on fuel unless the use of compulsory reserves is legalised" by a parliamentary vote, he told local radio.

The Lebanese pound has lost more than 90 per cent of its value on the black market, and 78 per cent of the population lives below the poverty line.

Crippling shortages of fuel and power cuts lasting more than 22 hours per day have left many businesses and homes without the diesel needed to power private generators, plunging the country into darkness.

They have also caused giant queues at petrol stations that are rationing gasoline supply, allegedly because of low stock.

Fuel importers blame the crisis on a delay by the central bank in opening credit lines to fund imports.

Salameh denied those charges on Saturday, accusing importers and distributors of holding back fuel to sell it at higher prices in the black market, or across the border in Syria.

"The importers are to blame," Salameh said, accusing them of squandering $820 million the lender had fronted for three months of imports.

To stem hoarding, the army on Saturday said it was raiding closed gas stations to seize gasoline and distribute it "free of charge" to the people.

It shared pictures and video footage on its social media pages, showing soldiers working pumps at gas stations and filling up car tanks.

An AFP correspondent saw soldiers deployed at several gas stations north of Beirut, where hundreds of vehicles had been queueing for long hours to fill up on petrol.

But some Lebanese remained bitter.

"The army's decision is too late," said one motorist who had been waiting for hours in the simmering heat.

After the army's deployment, many petrol stations across the country reopened after closing for several days.

The police also announced Saturday they would dispatch patrols to gas stations believed to be hoarding fuel and confiscate it.

The central bank's funding of fuel and other basic commodity imports has contributed to foreign reserves falling by more than 50 per cent from their pre-crisis level of more than $30 billion.

"Everybody was aware... they were aware in government, parliament and the president's office" that reserves were critically low, Salameh said, accusing them of inaction.

Salameh has headed the central bank since 1993 and is suspected by many Lebanese of helping facilitate large transfers of money abroad by the political elite during mass protests that began in October 2019.

He is under judicial investigation in Lebanon, Switzerland and France over several cases, including the diversion of public funds and illicit enrichment.

At home, many blame him for capital controls in place since 2019 that have trapped dollar savings and denied even the poorest segment of the population free access to their deposits.

But Salameh has pinned the blame on politicians who have failed to agree on a new government more than one year since caretaker premier Hassan Diab resigned in the wake of a monster explosion at the Beirut port.

International donors who have pledged millions in humanitarian aid to Lebanon have conditioned assistance on the formation of a new government that can spearhead reforms and resume negotiations with the International Monetary Fund.