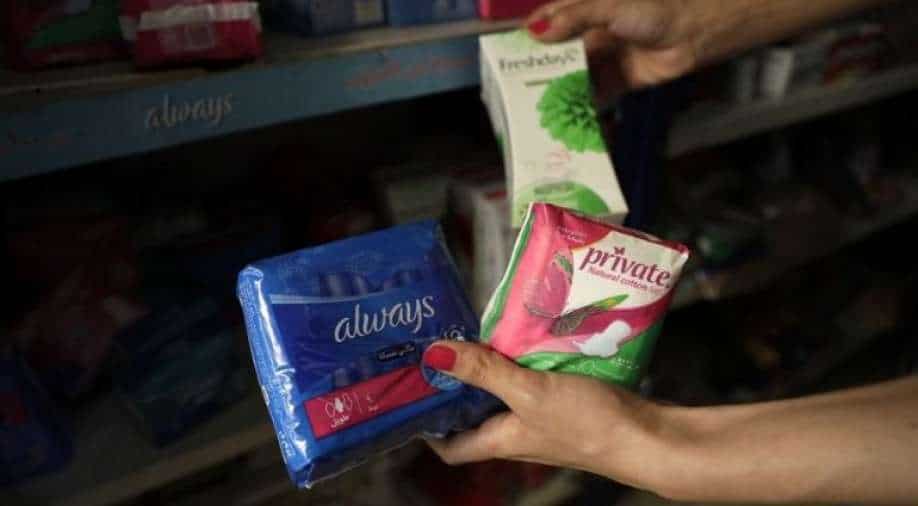 A Lebanese woman inspects prices of female sanitary pads at a shop in the capital Beirut on June 23, 2021. Photograph:( AFP )

The price of menstrual pads, the vast majority of which are imported, has risen by almost 500 per cent since the start of the financial crisis

With prices soaring in crisis-hit Lebanon, Sherine can no longer afford sanitary pads. So instead each month, she is forced to make her own using baby nappies or even rags.

"With all the price hikes and the frustration of not being able to manage, I'd rather stop having my period altogether," the 28-year-old told AFP, tears rolling down her cheeks.

The price of menstrual pads, the vast majority of which are imported, has risen by almost 500 per cent since the start of a financial crisis the World Bank has dubbed likely one of the world's worst since the 1850s.

With more than half the population living in poverty, tens of thousands of women are now on a desperate hunt for affordable alternatives.

Sherine initially turned to cheap sanitary pads that she said caused skin irritation, but even those have become too costly.

"At first, I felt defeated," the young mother told AFP, her hair tied up in a bun.

"But I chose to put my daughter first. I would rather buy her milk. As for me, I can make do."

But that has often meant repurposing some of the diapers a charity shop has given her for her toddler, cutting each in half to create two separate pads.

She said the process has been one of trial and error.

In the beginning, "I was always having to check if (blood) had leaked and stained my pants," she said.

The Lebanese pound has lost more than 90 per cent of its value against the dollar on the black market since the autumn of 2019, and Lebanese earning salaries in the local currency have seen their buying power plummet.

The government has subsidised essential goods including medicine, fuel and flour to ease the blow, but has come under fire for failing to include pads on its list.

In the absence of state support, the Dawrati (My Period) initiative was launched last year to address rising period poverty in Lebanon.

The group distributes free menstrual products to women in need, including some who were once members of the fast-vanishing middle class.

"Middle-class women also need them, like a bank employee whose salary in Lebanese pounds is no longer enough to get by," said co-founder Line Masri.

According to Dawrati, half of the women suffering from period poverty are using newspaper, toilet paper or old rags instead of pads, while two-thirds of adolescent girls have no means of purchasing sanitary products.

Yet the association is struggling to keep up.

"We aren't able to meet demand... because donations have declined significantly," Masri said.

At a Beirut charity store initially set up to distribute free clothes to the needy, employee Izdihar said a growing number of women were struggling to manage their periods.

Izdihar said she even sometimes had to resort to giving baby diapers from the store to her three daughters, aged 12 to 14.

Her youngest, who started menstruating this year, was having trouble adapting.

"She's stopped leaving the house when she has her period," Izdihar said.

Syria 'all over again'

Activists are seeking to produce viable alternatives to disposable pads.

Each includes a protective shield and absorbent liner and can be washed and reused for up to three years.

The project already distributes them to Lebanon's most vulnerable communities, including in Syrian refugee camps.

Rima Ali, a Syrian mother of six, was among dozens learning to make the pads.

The 45-year-old, who fled the war in Syria nine years ago, said she used to buy only the cheapest pads for herself and her three daughters, but they had become prohibitively expensive.

With her family running through around six packets a month, reusable pads seemed like a much better option.

"Back in Syria, there were some rough days when we couldn't even afford to buy bread," she said. "We used to cut up material to use" instead of sanitary pads.

"I never thought we would have to relive it all over again."