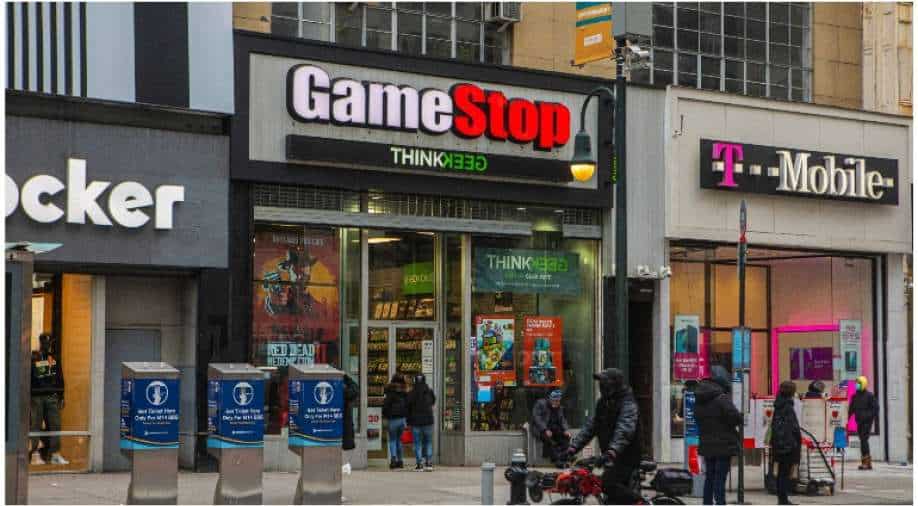 A GameStop store in Manhattan, Jan. 27, 2021. The internet and stock market are aflame over GameStop, the video game retailer whose stock is suddenly the darling of day traders who are putting the squeeze on billion-dollar hedge funds. (Hiroko Masuike/The New York Times) Photograph:( The New York Times )

It is Occupy Wall Street, the sequel. It is elements of the Tea Party, again. It is Bernie bros and MAGA maniacs.

The hordes of young traders who this week fueled a spectacular surge in the value of video game retailer GameStop may lack a unified political ideology. But they have forced a reckoning on Wall Street and caught the attention of leaders in Washington who recognize a populist uprising when they see one.

Wall Street has long been an easy villain for many on Capitol Hill. But the rush to side with speculative traders by both Democrats and Republicans reflects the broad recognition of the impulses that have driven U.S. politics in recent years, fueling both the ascension of President Donald Trump and a liberal wing of the Democratic Party that grew stronger in opposition.

The decision by online brokerage app Robinhood to impose trading limits as hedge funds were hammered by the wild market fluctuation has prompted the rarest of all political occurrences: bipartisan agreement. Lawmakers from across the political spectrum condemned the move and called for hearings into the decision — among them Sen. Ted Cruz, R-Texas, a staunch conservative; and Rep. Alexandria Ocasio-Cortez, D-N.Y., a standard-bearer of the left. The conservative attorney general of Texas and his progressive counterpart in New York have both initiated inquiries into Robinhood.

“For years, the stock market has been less and less about the value of business and more and more like casino gambling,” said Sen. Elizabeth Warren, D-Mass., who called for increased regulation of Wall Street shortly after the market frenzy over GameStop began this week.

“GameStop is just the latest and most visible example,” she said in an interview Friday. “We need to take this not as a one-off problem but as a systemic problem that requires systemic regulation and enforcement.”

While President Joe Biden defeated Trump with a centrist message of restoring political norms, the trading frenzy this week provided a potent reminder of the strong undercurrent of grievance and institutional distrust in the country. Many believe that will only intensify as the nation wrestles with the economic fallout from a devastating pandemic.

As Wall Street booms, unemployment has hit record highs, with nearly 10 million fewer people holding jobs than at the beginning of last year — a situation that reminds some former officials of the 2008 economic crisis that led to both the Occupy Wall Street and the Tea Party movements.

“It’s not about Republicans and Democrats,” said Newt Gingrich, the former Republican House Speaker and an ally of Trump. “It’s lots and lots of normal, everyday people who began to figure out they really got ripped off for the last year just like they got ripped off in 2008 and 2009. What you’re seeing is an almost spontaneous cultural reaction in which the little guys and gals are getting together and going after the bigs, so the bigs are having to rig the game in order to survive.”

The reality is more complicated. There is little sign of any central political mission shared by the millions of amateur traders who combined to squeeze at least two hedge funds that bet against the stocks of companies like GameStop and movie chain AMC. One of the originators of the scheme is far from a “little guy,” with the financial resources to have purportedly transformed an initial investment of $53,000 into $48 million. Overall, only about half the country owns any stock at all.

On Reddit, the online message board that helped fuel the surge, few of the mostly young participants frame their flood of investments in clearly partisan terms. Yet many write of being driven by anger over the 2008 financial bailouts that kept the big banks afloat while 10 million Americans lost their homes.

“When that crisis hit our family, we were able to keep our little house, but we lived off of pancake mix, and powdered milk, and beans and rice for a year,” one person identified as ssauronn posted on Reddit. “Your ilk were bailed out and rewarded for terrible and illegal financial decisions that negatively changed the lives of millions.”

Other posters responded with their own stories of economic struggle and political rage.

“Forget republican/democrat, left/right... the bankers play both sides and have almost always come out on top,” a poster identified as ChrisFrettJunior wrote, after recounting watching his parents struggle through the 2008 recession.

The decision to bail out the biggest banks and also decline to prosecute any of their top executives led to much of the populist fervor that has driven U.S. politics in the past decade. The Tea Party surged to political prominence in the wake of the $700 billion financial rescue package that passed in 2008, eventually becoming a force that defeated both moderate Republicans and Democrats.

After Republicans won control of the House in 2010, Democrats began to face their own backlash, beginning with Occupy Wall Street — a loose coalition of largely liberal protesters who fueled a national conversation about economic inequality.

These days, political strategists warn, hedge funds, private equity investors and bankers are unlikely to find the same kind of deep support in Washington. Anger over the bailouts fueled the campaigns of political outsiders, creating a Congress that is less receptive to the pleas of Wall Street and far more eager to make use of upheaval to advance their agendas.

“There’s a ton of political currency in holding hedge funds’ feet to the fire from Democrats and Republicans,” said Josh Holmes, a Republican strategist and longtime adviser to Sen. Mitch McConnell, R-Ky. “If you’re sitting on Wall Street looking at this, dismissing people as folks who don’t understand the way that the markets work, I think you’re going to be in a lot of trouble.”

For Republicans, the market upheaval was a referendum on elitism. Democrats saw pure corporate greed and the need for greater regulation.

“Big Hedge, with outposts in South Hedge-i-stan (Wall Street) and North Hedge-i-stan (Greenwich, CT), has made trillions shorting great American companies facing a rough patch,” said Rep. Jeff Fortenberry, R-Neb. “Now they are getting a comeuppance from flash mobs of day traders and are paying dearly.”

Most of the ire this week was directed at Robinhood, a brokerage app catering to younger investors, which suddenly limited trading in GameStop, AMC and other stocks. Lawmakers argued that the app was protecting hedge funds and other big investors over retail investors. Robinhood said the additional restrictions were necessary to comply with government financial requirements.

Yet even centrists like Sen. Pat Toomey, R-Pa., who is poised to become the top Republican on the Senate Banking Committee, expressed concerns about the lack of transparency in the online company’s decision-making.

Although politicians from both sides joined calls for greater scrutiny, it was hardly a kumbaya moment for the two parties.

After Cruz tweeted that he agreed with Ocasio-Cortez’s call for a probe into Robinhood’s action, she quickly disavowed any support from Cruz, who was a prominent backer of Trump’s baseless claims of election fraud.

“I am happy to work with Republicans on this issue where there’s common ground, but you almost had me murdered 3 weeks ago so you can sit this one out,” she responded. “Happy to work w/ almost any other GOP that aren’t trying to get me killed. In the meantime if you want to help, you can resign.”

Cruz condemned her response as “partisan anger” that’s “not healthy for our country,” drawing another response from Ocasio-Cortez, while his allies in the House called for an apology.

The uproar over GameStop and Robinhood comes at a challenging time for the Biden administration, which took office promising to restore a sense of calm to the country. The Senate Banking Committee has yet to schedule a hearing to confirm Gary Gensler, Biden’s pick to lead the Securities and Exchange Commission, leaving the agency with an acting chair for the indefinite future. On Friday the White House press secretary, Jen Psaki, deferred questions on the issue.

“It’s a good reminder, though, that the stock market isn’t the only measure of the health of our economy,” she said, an apparent reference to Trump’s persistent fixation on stock prices during his tenure. Biden has not yet commented on the issue.

Rep. Ro Khanna, D-Calif., a progressive who represents a district that includes Silicon Valley, said this week’s events should alert lawmakers to the need to tighten financial regulations and increase transparency and equity.

He said the wide range of Republicans and Democrats who have spoken out are a reflection of “a real populist anger in this country.”

“Some people go get fancy degrees, know the right people and spend all day in front of their computers short selling, Khanna said. “And it’s a form of manipulation that has hurt our country. That has enriched the few at the expense of many Americans.”

Although many Americans own no stock at all, the sense that Wall Street has gamed a rigged system cuts across demographic barriers, he argued.

“I think this has been bubbling up since the Wall Street crash of 2008,” Khanna said. “And it’s coming to a boiling point.”