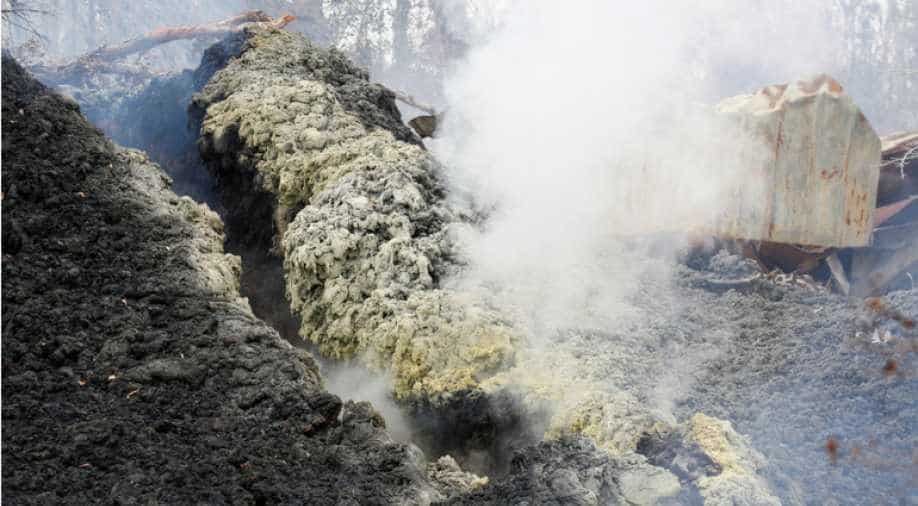 Volcanic gases rise from a fissure near the remains of a structure in the Leilani Estates Photograph:( Reuters )

Lava flowing from giant rips in the earth on the flank of Hawaii's erupting Kilauea volcano threatened highways on Monday, raising the possibility officials may order thousands more people to evacuate before escape routes are cut off.

Lava from a huge new fissure tore through farmland towards a coastal dirt road that is one of the last exit routes for some 2,000 residents in the southeast area of Hawaii's Big Island.

More lava-belching cracks are expected to open among homes and countryside some 25 miles (40 km) east of Kilauea's smoking summit, possibly blocking one of the last exit routes, Highway 132.

Fountains of magma spouted "lava bombs" over 100 feet (30 meters) into the air as the molten rock travelled east-southeast towards the coastal road -- Highway 137, the Hawaiian Volcano Observatory said.

If either highway is hit by lava, mass evacuations would be triggered, said Hawaii National Guard spokesman Jeff Hickman.

"There's a lot of worst-case scenarios and roads getting blocked is one of them," said Hickman, standing on Highway 137, in the potential path of the lava flow, some two miles (3.2 km) away.

A massive new fissure opened on Hawaii's Kilauea volcano, hurling bursts of rock and magma with an ear-piercing screech on Sunday as it threatened nearby homes and prompted authorities to order new evacuations.

The fissure, a vivid gouge of magma with smoke pouring out both ends, was the 17th to open on the volcano since it began erupting on May 3. Some 37 buildings have been destroyed and nearly 2,000 people ordered to evacuate in the past 10 days.

Seen from a helicopter, the crack appeared to be about 1,000 feet (300 meters) long and among the largest of those fracturing the side of Kilauea, a 4,000-foot-high (1,200-meters) volcano with a lake of lava at its summit.

The American Red Cross said 500 people sought refuge in its shelters on Sunday night because of worsening volcanic activity.

Two more fissures opened in the last 24 hours, to total 19.

"It's optimistic to think that this is the last fissure we're going to see," said Hawaiian Volcano Observatory Deputy Scientist-In-Charge Scientist Steve Brantley, adding that a similar seismic event in 1955 lasted 88 days.

Unnerved by near constant small earthquakes and emissions of toxic sulphur dioxide gas, Rob Guzman and his husband Bob Kirk left their home in Kalapana Seaview Estates while they still could.

"We just need the local government to calm down the panic that some of these 2,000 people are feeling, that today, we're going to be trapped with no way out," said Guzman, who left behind a banana farm and rental properties to go stay with friends.

While residents deal with noxious gas and lava on the ground, the U.S. Geological Survey is concerned that pent-up steam could cause a violent explosive eruption at the volcano crater, launching a 20,000-foot (6,100-meter) plume that could spread debris over 12 miles (19 km).

Scientists had expected such explosions by the middle of this month as Kilauea's lava lake fell below the water table. The possibility exists, however, that water may not be entering the crater, as feared, and gas and steam may be safely venting, scientists said.

"So far those explosions have not occurred, and I think the key here is that the vent system is an open one, therefore pressure is not being built or developed down at the top of the lava column," Brantley told a conference call.