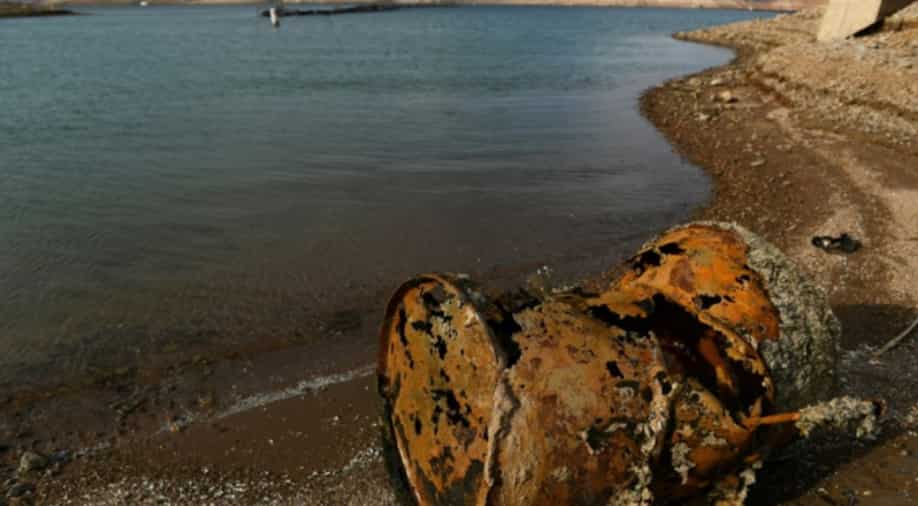 A rusted metal barrel, near the location where a different drum was found containing a human body, sits exposed on the shore of Lake Mead, in Boulder City, Nevada outside Las Vegas. Photograph:( AFP )

In a grueling decades-long drought, Lake Mead is drying up and its receding waters are leaving behind the usual flotsam and jetsam of a lake heavily trafficked by weekend boaters

The watery graves outside Las Vegas are starting to cough up Sin City's darkest secrets as climate change is messing up with the mafia.

In a grueling decades-long drought, Lake Mead is drying up and its receding waters are leaving behind the usual flotsam and jetsam of a lake heavily trafficked by weekend boaters.

After authorities found the remains of a human being stuffed in a barrel they discovered that he had been shot in the head.

Geoff Schumacher of The Mob Museum in Las Vegas told news agency AFP that "The mob had a propensity to put people in barrels, whether they're burying them in a lake, or dumping them out in the field."

''That's number one. Number two, the person was shot in the head, typical mob hit style.''

"And third, we know that this happened in the late '70s, early '80s (when) the mob was very prominent in Las Vegas."

In the 20th century, an improbable oasis of hotels, casinos, and vice sprouted in the baking Nevada desert.

The population of Las Vegas swelled in the 1930s after work began on the nearby Hoover Dam even though it had been founded in 1905.

Organised crime was lurking in the background following an influx of construction workers which created a market for entertainment, which was filled by sex workers, showgirls, and legalised gambling.

"The mob played a pretty big role in the development of Las Vegas from the 1940s through the 1980s," said Schumacher.

"There was a lot of behind-the-scenes activity where the mob was controlling the management of the casinos, but also building and expanding the casinos, using in many cases, Teamsters union money."

He believes that the body found belongs to Jay Vandermark, who worked at the Stardust Hotel, an operation run by Frank "Lefty" Rosenthal on behalf of the Chicago Mob.

Becoming the global capital of gambling, the city grew rich in the post-World War II boom that fueled the American dream.

A mafia boss in Chicago or New York wanted his cut for every $100 that a hapless tourist lost at the blackjack table in a fug of free booze.