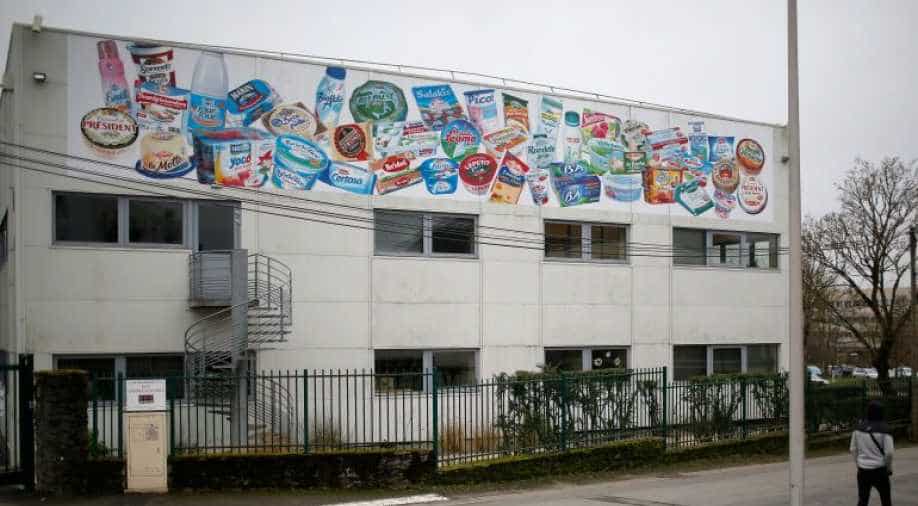 A milk products sticker is seen on a building at the French dairy group Lactalis headquarters in Laval. Photograph:( Reuters )

France welcomed dairy group Lactalis' pledge to compensate victims of a Salmonella contamination in its baby milk on Sunday, but said a judicial investigation to determine who was responsible would continue.

Lactalis Chief Executive Emmanuel Besnier told the weekly Journal du Dimanche his family company, one of the world's biggest dairies, would "pay damages to every family which has suffered a prejudice".

Salmonella infections can be life-threatening and the families of three dozen children who have fallen sick in France as a result of the contaminated baby milk have announced a raft of lawsuits.

Besnier's promise came two days after Lactalis widened a product recall to cover all infant formula made at its Craon plan, regardless of the manufacture date, in a bid to contain the fallout from a health scare that risks damaging France's strategic agribusiness in overseas markets.

"Paying compensation is good, but money cannot buy everything," government spokesman Benjamin Griveaux said in an interview on BFM TV.

"It is the job of the investigation to determine where failings occurred and who is to blame," Griveaux said, adding that "responsibilities were shared". Besnier did not say how much the damages might amount to.

Implementing the global recall will be challenging. Privately owned Lactalis, one of the world's biggest dairies, exports its baby food products to 83 countries across Europe, Africa and Asia.

The recall involves some 12 million tins of baby milk.

"It's not easy to evaluate the number of items that need to be returned because we don't know what's been consumed already," Besnier said in a rare newspaper interview published on Sunday.

Friday's recall was the third in a month and Lactalis has come under fire for its clumsy response. Besnier also told the French weekly that the company had acted as quickly and efficiently as possible and denied slowing the process to curb losses.

Besnier has also been criticised for failing to speak out publicly during the salmonella scare.

While his family are France's 11th wealthiest, according to a 2017 ranking by Challenges magazine, the dairy tycoon has long shunned the public limelight and schmoozing with politicians.

His workers nickname him the "invisible man."

"We're a discreet business. In this region there is a mentality of work first, speak later," he said. But he acknowledged lessons had been learned during the past few weeks.

Lactalis has become an industry giant, with annual sales of 17 billion euros ($20.73 billion) and 18,900 employees across some 40 countries.

He said the Craon plant was likely to remain closed for several months.

The recall risks damaging Lactalis in China, a fast-growing market for baby food and dairy products where scares after melamine-tainted baby milk led to the deaths of six children in 2008.

That scandal caused distrust in locally produced infant formula and benefited foreign suppliers such as Nestle, Danone and Lactalis.