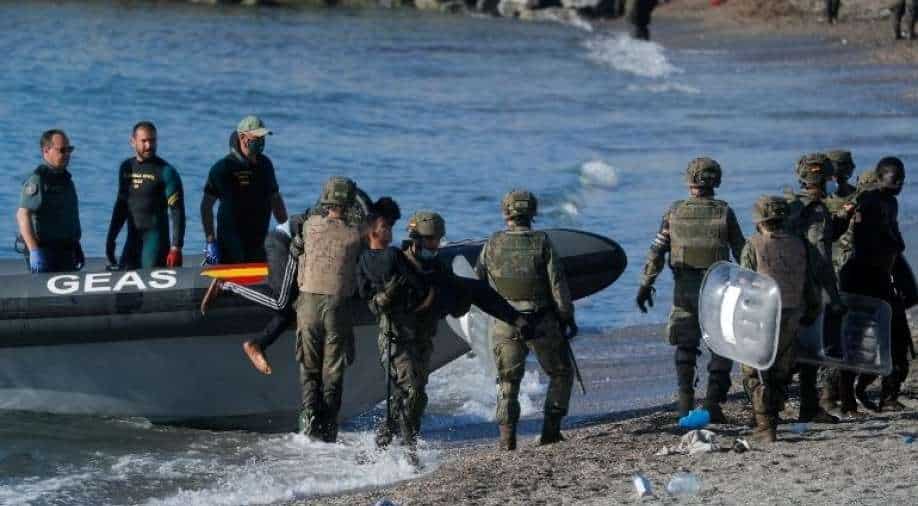 Spanish soldiers help Moroccan citizens at El Tarajal beach, near the fence between the Spanish-Moroccan border, after thousands of migrants swam across the border, in Ceuta, Spain Photograph:(Reuters)
Follow Us

Before this week's border crisis, Moroccan authorities had warned Spain of repercussions over Ghali's presence in Spain under a false Algerian passport and an assumed name

Spain accused Morocco of "blackmail" on Thursday for allowing a record 8,000 migrants to reach the Spanish North African enclave of Ceuta, sparking a crisis that saw clashes on the Moroccan side of the border overnight.

The dispute between Spain and Morocco comes during heightened tensions over Madrid's decision to provide medical treatment for the ailing leader of the Western Sahara independence movement, who has COVID-19.

Spanish Prime Minister Pedro Sanchez has said "Let's remember the border with Ceuta is not only the border between Morocco and Spain, but it is also a European border and consequently the lack of control, in this case, by the Moroccan authorities isn't only a lack of respect towards Spain but also towards the European Union as a whole."

"We are proceeding with the immediate return of those who have entered illegally. About 4800 people have already been returned to Morocco after entering Ceuta illegally two days ago."

The rush of migrants began on Monday when Morocco appeared to loosen border controls, a move widely interpreted as retaliation for Spain's hosting of a Western Sahara independence leader.

As dense afternoon fog descended on Wednesday, hundreds of young men tried to approach the six-metre-high (20-foot-high) border fence before being repelled by Moroccan police, who later urged the crowd to disperse.

Others had entered the water and begun swimming towards Ceuta's beach a few hundred metres (yards) away. Spanish television showed the army meeting boys as they reached the shore. Some 1,500 underage migrants are now in reception centres in Ceuta from this and previous waves, Spain said.

On the northern tip of Morocco across from Gibraltar and with a population of 80,000, the enclave has periodically been a magnet for refugees seeking a quick way into Europe. But Rabat has cracked down on border traffic in recent years.

The variable security presence at the border reflects the paradox that Morocco faces in dealing with Ceuta and a second enclave, Melilla, zones its frontier guards protected from mass migration for years while simultaneously demanding that Spain give them up.

Morocco increased efforts to stop migrants reaching Spain in 2018 and, in return for cash assistance, cutting the number of illegal crossings.

Rabat views the enclaves, held by Spain since the 16th century, as colonial relics, though they are a lower priority than seeking global acceptance for its rule in Western Sahara, challenged by the Algeria-backed Polisario.

Ceuta, along with Spain's other North African enclave Melilla, have the European Union's only land border with Africa and have long been a magnet for migrants seeking a better life in Europe.

Spain has received the support of top European officials, with European Commission vice president Margaritis Schinas warning that Europe "won't let itself be intimidated by anyone on the issue of migration" in a veiled allusion to Morocco.

Rabat responded in the form of a flurry of angry dispatches saying that "Morocco is a sovereign country" and "is not the police of Europe".

Brahim Ghali is accused by rights groups of war crimes and must still go through a preliminary hearing, a court spokesman said, part of a wider diplomatic dispute over the Polisario Front, a separatist movement fighting for Western Sahara's independence from Morocco.

Western Sahara is a disputed territory held by Morocco since the mid-1970s. The Algeria-backed Polisario Front has been fighting to secure its independence since then. Before then, the territory was under Spanish control.

Before this week's border crisis, Moroccan authorities had warned Spain of repercussions over Ghali's presence in Spain under a false Algerian passport and an assumed name.