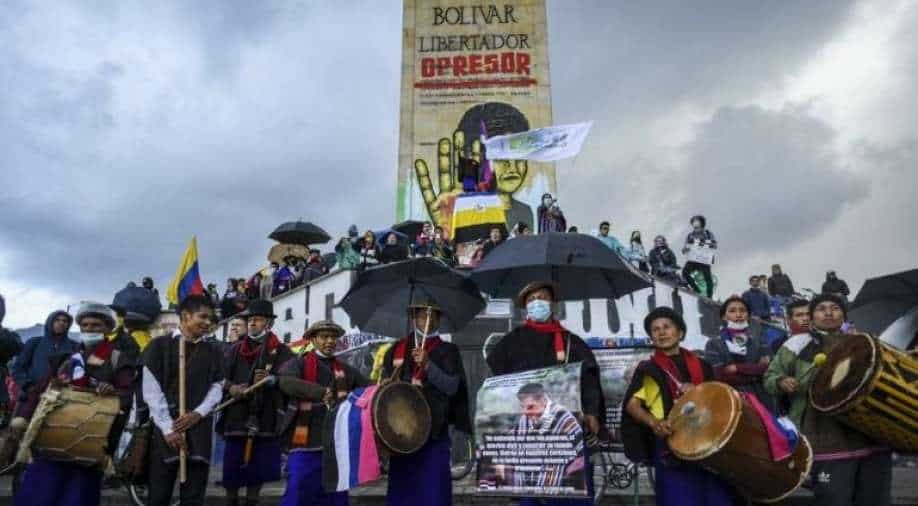 Misak indigenous people demonstrate against the government of Colombian President Ivan Duque outside the Congress building in Bogota, on June 2, 2021. Photograph:(AFP)
Follow Us

Marc Miller's comments followed the recent discovery of unmarked graves of 215 children in Kamloops at one of 139 boarding schools set up a century ago to forcibly assimilate Canada's indigenous peoples.

Canada's Indigenous services minister said Wednesday it is "shameful" that the Pope has never formally apologized for abuses at the country's Catholic-run indigenous residential schools, which he termed "labour camps."

Marc Miller's comments followed the recent discovery of unmarked graves of 215 children in Kamloops at one of 139 boarding schools set up a century ago to forcibly assimilate Canada's indigenous peoples.

"I do, I do," the minister told a news conference when asked if he supports growing indigenous calls for a papal apology that dates back to a 2015 truth and reconciliation commission report, and before.

"I think it is shameful that they haven't done it, that it hasn't been done to date," he said. "It should be done. There is a responsibility that lies squarely on the shoulders of the Council of Bishops in Canada."

"They want to hear the Pope apologize," she said, urging Catholics across Canada to "ask their church to do better."

"In light of the heartbreaking disclosure of the remains of 215 children at the former Kamloops Indian Residential School, I am writing to express my deep apology and profound condolences to the families and communities that have been devastated by this horrific news," he said in a statement.

"If words of apology for such unspeakable deeds are to bring life and healing, they must be accompanied by tangible actions that foster the full disclosure of the truth," he said, pledging to make church records about the schools available.

"The church was unquestionably wrong in implementing a government colonialist policy which resulted in devastation for children, families and communities," he said.

The Kamloops Indian Residential School in British Columbia, where the unmarked graves were discovered last week using ground-penetrating radar, was operated by the Catholic church on behalf of Ottawa from 1890 to 1969.

Some 150,000 Indian, Inuit and Metis youngsters in total were forcibly enrolled in these schools, where students were physically and sexually abused by headmasters and teachers who stripped them of their culture and language.

Today those experiences are blamed for a high incidence of poverty, alcoholism and domestic violence, as well as high suicide rates, in indigenous communities.

Miller recalled an anecdote shared by an indigenous faith keeper about one such school where students -- who were often malnourished -- were "punished" for eating apples from its orchard or eggs that were destined for market.

"These were labour camps," he said. "So calling (them) a school is probably a euphemism."

A delegation of indigenous leaders had in 2009 met privately with Pope Benedict who "expressed his sorrow" over the school harms to indigenous peoples.

Although the statement of regret was welcomed by the group as "significant," they said it fell short of an official apology.

The truth and reconciliation commission later noted that it was "disappointing to survivors and others that the Pope (had) not yet made a clear and emphatic public apology in Canada for the abuses."

Pope Francis's subsequent refusal in 2018 -- after Canada's parliament passed a motion again asking the pontiff to apologize -- drew a polite rebuke from Prime Minister Justin Trudeau, saying he was "disappointed" with the church's decision.