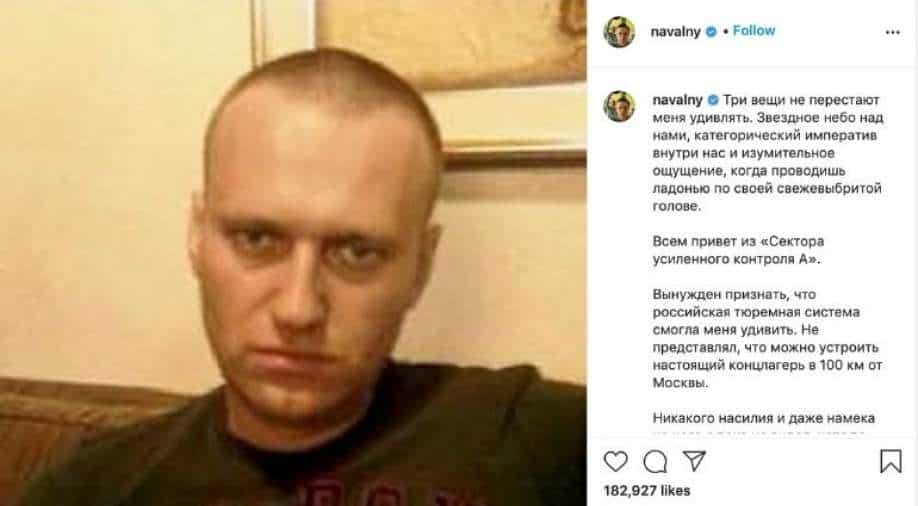 Kremlin critic Alexei Navalny, who is serving a two-and-half-year jail term in a penal colony outside Moscow, has claimed that he was locked up in a "real concentration camp".

His comments were the first confirmation of widespread reports that the Russian opposition politician would be spending his sentence at one of the most notorious facilities in Russia's extensive network of over 600 work colonies.

Navalny's precise location had been unknown after his legal team said last week that he had been moved from the nearby Kolchugino jail and that they had not been told where he was being taken.

On Monday, Navalny said he was fine and being held at the IK-2 corrective penal colony in the town of Pokrov, about 100 km east of Moscow.

"Hi everyone from 'Heightened control sector A'," Navalny said in a message posted online shortly after his lawyers visited him at the facility.

"I have to admit that the Russian prison system has managed to surprise me. I never imagined that it was possible to build a real concentration camp 100 kilometres from Moscow".

Woken up 'every hour'

Navalny said he had not yet seen any hints of violence at the colony, but because of the "tense posture of the convicts", he can "easily believe" previous reports of brutality.

The post was accompanied by a picture of Navalny sitting on a sofa with his hair cropped close to his head.

Navalny, 44, one of President Vladimir Putin's most prominent critics, was jailed earlier this year for parole violations in a decision that the West has condemned as politically motivated.

He is due to serve out a two-and-a-half-year sentence and is only able to communicate with the outside world via his lawyers.

The Instagram post said that swearing was banned at the facility and that the ban was widely observed by fellow inmates who seemed scared to turn their heads twice.

He said he had not seen any prison violence or suggestion of it himself, but could believe stories he had heard about past cases of violence.

"There are video cameras everywhere, they keep watch on everyone and make reports for the slightest infractions. I think someone high up has read 1984 by Orwell," he said.

He said he was woken up every hour during the night because he had been deemed a flight risk.

"But if you regard everything with humour, you can live here. So on the whole, everything is fine with me," he said.

Navalny returned to Russia in January from Germany, where he had been recuperating after allegedly being poisoned with what many Western nations claimed was a nerve agent. The Kremlin has denied any involvement and questioned claims that he was poisoned.

Western countries have called for Navalny's release, and the United States and European Union have imposed sanctions against Russian officials over the case.