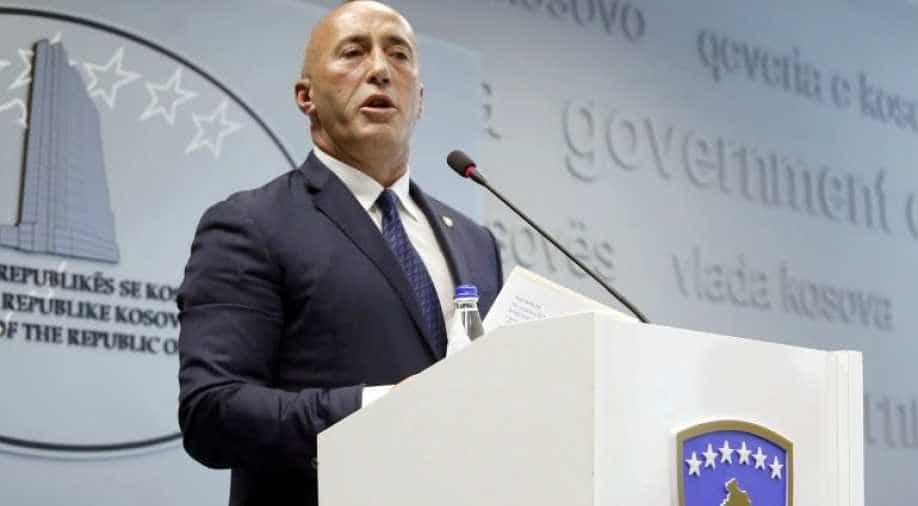 Observers in Kosovo say he could be held accountable for having failed to prevent crimes committed by KLA members under his command.

International prosecutors questioned Kosovo's ex-prime minister and wartime guerrilla commander Ramush Haradinaj on Wednesday in the latest in a series of war crimes proceedings against him.

Haradinaj left the hearing at the special court for Kosovo in The Hague along with Jakup Krasniqi, a spokesman for his former Kosovo Liberation Army (KLA), who was also questioned.

"I responded today to the special tribunal's request, as a suspect," Haradinaj told reporters outside the special court's high-security buildings.

"I used my right to remain silent," he said.

Haradinaj was the commander of the ethnic Albanian guerrillas in the Western Kosovo region of Dukagjin, where heavy fighting and abuse of civilians occurred on both sides during the war.

Observers in Kosovo say he could be held accountable for having failed to prevent crimes committed by KLA members under his command.

Haradinaj said prosecutors did not confront him with "concrete" evidence on Wednesday, as they did not have to divulge any information at this stage according to the law.

"They talked about my role during the war, but they did not give me anything concrete... We asked for explanations but did not receive them," said the former guerrilla.

He said he believed "always to have been in line with what is right."

"We have fulfilled our legal obligation, according to the laws in force," Krasniqi told reporters. He did not say whether he was questioned as a suspect or a witness.

Haradinaj, 51, resigned last week as prime minister after being summoned by the court.

Freedom fighter
Created in 2015, the tribunal investigates crimes allegedly committed by the Kosovo Liberation Army (KLA) against Serbs, Roma and ethnic Albanian political opponents during and after the 1998-99 war.

Funded by the European Union and composed of international judges, the special court nonetheless falls under Kosovar law and is based in The Hague to protect witnesses.

Haradinaj has already been tried and acquitted twice for war crimes by another UN tribunal for former Yugoslavia.

"I always responded to (requirements) of national and international laws (but)... I also have my dignity", Haradinaj told AFP in January.

The last conflict in the former Yugoslavia between the KLA and Serbian armed forces claimed more than 13,000 lives, including some 11,000 ethnic Albanians.

It ended when a Western bombing campaign forced Serbian forces to withdraw.

Some thirty former KLA members have been summoned by the special court which has yet to file a single criminal charge.

"Freedom fighters always do what is right and just," Haradinaj wrote on Facebook.