Kosovo 11 years on: A contested status and a grim economy 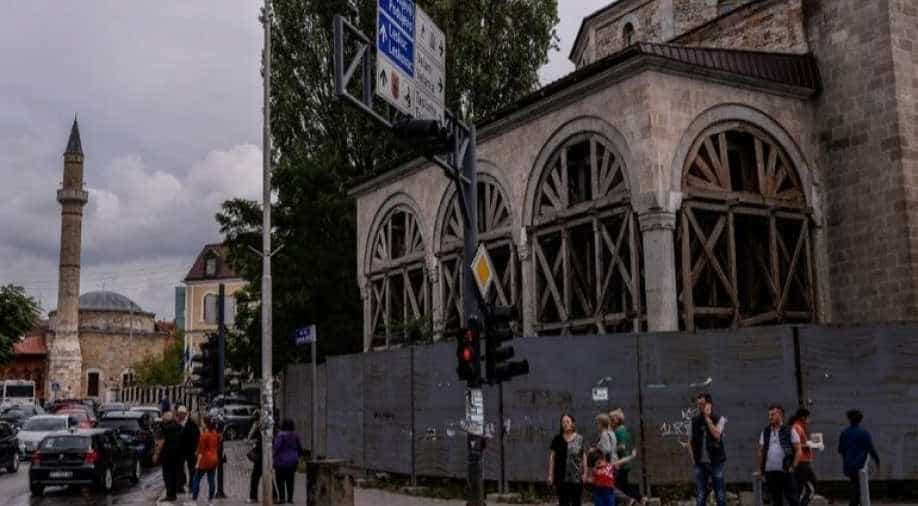 People wait to cross a street in front of the city mosque in Pristina on September 9, 2019. Photograph:( AFP )

Kosovo formally declared its statehood in 2008, a decade after its ethnic Albanian guerrilla fighters battled Serb troops in a war that cost 13,000 lives, mostly Albanian.

Kosovo heads to the polls Sunday in the fourth general election since the former province declared independence from Serbia in 2008.

But Kosovo's status as a nation remains a matter of international dispute, relations with Belgrade are dismal, and its people are fed up with widespread poverty and corruption.

Kosovo formally declared its statehood in 2008, a decade after its ethnic Albanian guerrilla fighters battled Serb troops in a war that cost 13,000 lives, mostly Albanian.

But the former province has struggled to gain full acceptance on the world stage.

Serbia and its allies Russia and China refuse to recognise the split, effectively barring Kosovo from the United Nations.

Kosovo says it is recognised by 116 countries.

But Belgrade claims to have convinced at least a dozen of those nations, mainly small ones, to reverse their recognitions.

According to Serbia's foreign minister, Belgrade's goal is to bring the figure down to under half of the UN's 193 member states.

Where are the Belgrade-Pristina talks?

The long-running EU-led dialogue between the neighbours has been frozen for more than a year, despite several efforts to resuscitate it.

A historic accord signed in 2013 was never implemented after the two sides were unable to agree on what powers to give Serb-majority municipalities in Kosovo.

Ethnic Albanian-majority Kosovo is still home to about 120,000 ethnic Serbs who are fiercely loyal to Belgrade.

They are most concentrated in the north around the divided city of Mitrovica, where Pristina has struggled to exercise its authority.

There are also around a dozen predominantly Serb enclaves elsewhere in Kosovo.

What do Kosovans care about?

While the West is preoccupied with normalising ties between the former war foes, Kosovans have other pressing issues on their minds.

Corruption and unemployment are the public's top two concerns, according to a survey by the National Democratic Institute (NDI).

Next on the list is a desire to win visa-free travel status in the EU, which all other Balkan states enjoy.

Young people, who make up around half of the population, are especially hit by high unemployment rates and many are eager to emigrate abroad.

When will we know who is Kosovo's next leader?

Kosovo's fractured political scene means that no party is expected to win an absolute majority in the 120-member parliament.

It could take days, if not weeks, to forge a coalition.

After the last election in 2017, parties led by former guerilla commanders joined forces in order to hold onto power.

This time, they are facing a challenge from the centre-right LDK and the nationalist leftist Vetevendosje, who share little in common ideologically but could unite to oust the so-called "war wing".

Serbia regularly accuses Pristina and Tirana of harbouring plans to merge into one country.

There is not any reliable polling on the sensitive subject, but analysts doubt a majority of Kosovans would be for it, given the potential for destabilisation in the region.

The idea is not taken seriously among most of Kosovo's political elite.

The exception is the leader of the nationalist leftist Vetevendosje party, Albin Kurti, who was for many years a vocal advocate.

But during this campaign he has walked that back, saying: "at the moment, we are not in a position to achieve this unification".