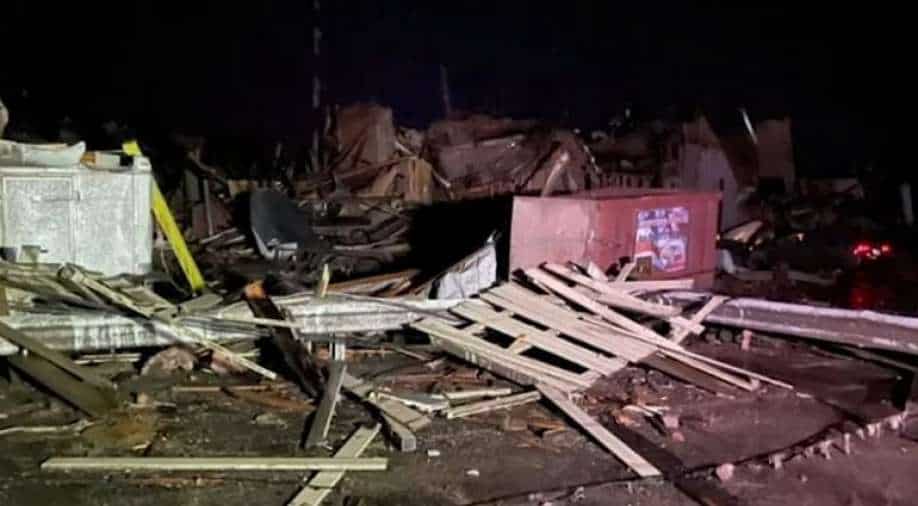 At least 19 tornadoes have been reported across five states, officials said, with a tornado hitting a nursing home in Monette, Arkansas, and an Amazon warehouse in Edwardsville damaged

At least 50 people are feared dead in Kentucky after a storm battered the southeastern US state.

A major state of emergency was declared by Kentucky governor Andy Beshear just before midnight, with the Kentucky State Police saying that significant damage had been reported and "loss of life is expected".

"I fear that there are more than 50 dead ... probably closer to somewhere between 70 and 100, it's devastating," he said, adding this was the "most severe tornado event in Kentucky's history".

“There were about 110 people in it at the time that the tornado hit it,” Beshear said. “We believe we’ll lose at least dozens of those individuals. It’s very hard, really tough, and we’re praying for each and every one of those families.”

This morning, I was briefed on the devastating tornadoes across the central U.S. To lose a loved one in a storm like this is an unimaginable tragedy. We’re working with Governors to ensure they have what they need as the search for survivors and damage assessments continue.

At least 19 tornadoes have been reported across five states, officials said, with a tornado hitting a nursing home in Monette, Arkansas, and an Amazon warehouse in Edwardsville damaged.

Edwardsville Police Chief Mike Fillback said several people who were in the building were taken by bus to the police station in nearby Pontoon Beach for evaluation.

The Collinsville Emergency Management Agency described it as a "mass casualty incident" with "multiple subjects trapped at Amazon Warehouse".

Meanwhile, Illinois Governor JB Pritzer said: "My prayers are with the people of Edwardsville tonight."

"Our Illinois State Police and Illinois Emergency Management Agency are both coordinating closely with local officials and I will continue to monitor the situation," he added.

“The safety and well-being of our employees and partners is our top priority right now,” Amazon spokesperson Richard Rocha said in a written statement, “We’re assessing the situation and will share additional information when it’s available.”

In Arkansas, one person was killed and 20 others were trapped after a tornado struck the Monette Manor nursing home, US media reported.