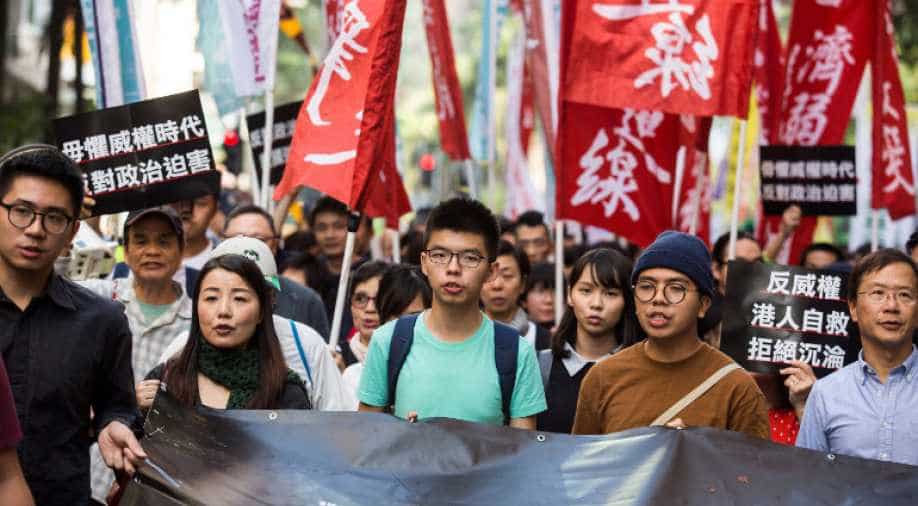 Around 1,000 people took part in the march which was led by some of the city's high-profile democracy campaigners. Photograph:(AFP)
Follow Us

Around 1,000 people marched through Hong Kong Sunday, led by some of the city's high-profile democracy campaigners including Joshua Wong, in what they billed an "anti-authoritarian" protest.

Activists say Hong Kong is at risk of losing its rights and liberties in the face of growing Chinese pressure on the semi-autonomous city.

The jailing of campaigners following court hearings, and fears that Hong Kong will introduce an anti-subversion law, are among the key concerns in the pro-democracy camp.

Wong, 21, was jailed in August over his role in the Umbrella Movement mass pro-democracy protests of 2014 and is on bail pending an appeal.

He will be sentenced on another protest-related charge Thursday, which could mean more jail time.

"No one likes to serve a prison sentence, (but) if it can mobilise more people to care about justice and democracy in Hong Kong, I think it's valuable and I will pay this price," Wong told AFP.

Protesters carried placards reading: "The Hong Kong spirit can never be imprisoned" and "Walk with the resisters, fight authoritarian rule".

Some held up caricatures of city leaders.

Others played a recording of China's national anthem and paraded a doll bearing the sign: "When you hear the national anthem, don't eat. Stand up immediately." A new law introduced by Beijing against disrespecting the anthem will also be applied to Hong Kong.

The city was handed back to China by Britain in 1997 and is governed by a "one country, two systems" deal which grants it freedoms unseen on the mainland.

But with the emergence of a fledgling pro-independence movement, Beijing is pushing a tougher line on Hong Kong.

There are also concerns about a new express railway to the mainland, which will mean that parts of the train terminus come under Chinese jurisdiction.

Student Kelvin Muk, 20, said he had joined the march because he feared he may eventually lose the right to do so.

"We are increasingly coming out to protest because we want to at least hold on to the last remaining freedoms we have," he said.