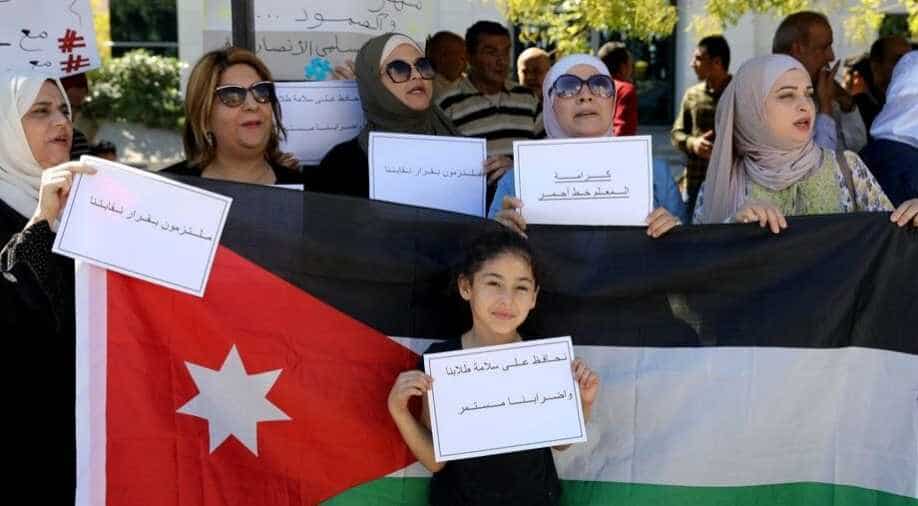 A girl holds placard in front of a Jordanian national flag as public schools' teachers take part in a protest in Amman. Photograph:( Reuters )

The deal came after the strike threatened a deepening political crisis.

Jordan's government said on Sunday it has reached a pay deal with the teachers union to end a one-month strike, the country's longest public sector strike that disrupted schooling for more than 1.5 million students.

The deal came after the strike threatened a deepening political crisis when the government last week began legal steps against the unions after they rejected pay hikes they said were "bread crumbs" and the government said it could not afford to give more.

The pay deal will see salaries rise by 35 per cent to 60 per cent from next year. It comes after weeks of deadlock with the government intransigent over meeting an original 50 per cent pay rise demanded by the unions that it said would strain the heavily indebted country's finances.

Officials said that King Abdullah had ordered the government to reach the hefty wage deal which tests the ability of Prime Minister Omar al Razzaz to stay on track in implementing tough fiscal reforms backed by the International Monetary Fund (IMF) aimed at reducing a record $40 billion public debt.

The government fears new pay demands by other public sector employees, including doctors, and pension increases for retired soldiers would wreck efforts to restore fiscal prudence needed for a sustained economic recovery.

Dozens of activists from the powerful teachers union, whose members succeeded in forcing the government to agree to substantial pay hikes after a four-week standoff, celebrated in front of their headquarters in Amman.

"The teachers got their demands," said Nasser Al Nawasrah, deputy head of the Jordanian Teachers Syndicate. He called on his organisation's 100,000 members to immediately resume teaching pupils in around 4,000 state schools that had been affected by the strike.

Tens of thousands of pupils headed to state school across the country on Sunday for the first time since September 5. The unions announced the strike after the authorities used tear gas to disperse thousands of teachers who had congregated to press for the wage demands near government headquarters.

Many parents had kept their children at home out of solidarity with the striking teachers.

In many of the country's rural areas and smaller cities, traditional heartlands of support for the monarchy, the strike also became a protest against successive governments' failure to deliver on promises of economic growth.

Growing disenchantment among ordinary Jordanians over tough IMF austerity measures and high taxes spilled into large street protests in the summer of 2018 that railed against corruption and mismanagement of public funds.

Economists and experts said the teachers' strike exposed popular anger with deep disparities within a bloated public sector that has in the last two decades expanded rapidly as successive governments sought to appease Jordanians with state jobs to maintain stability.

The teachers, whose average salary is around $630 per month, said they have fallen behind others in many government ministries and state agencies plagued by graft and nepotism.

The IMF and Western donors said salaries and pensions eat up much of the government's $13 billion budget in a country with some of the world's highest government spending relative to its economy.