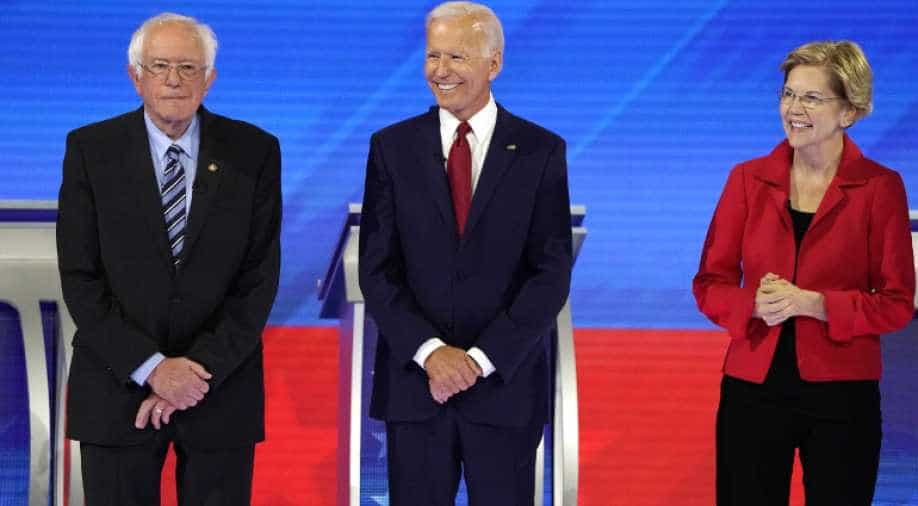 Biden, under pressure to appear in command as the candidate to beat in 2020, pushed back hard against senators Bernie Sanders and Elizabeth Warren during the debate in Houston, Texas a showdown seen as a tough test of the 76-year-old's stamina

Frontrunner Joe Biden came out swinging in the third Democratic debate for the White House nomination, clashing with his top two rivals over the future of health care in America and dismissing their plans as unrealistic pipe dreams.

Biden, under pressure to appear in command as the candidate to beat in 2020, pushed back hard against senators Bernie Sanders and Elizabeth Warren during the debate in Houston, Texas a showdown seen as a tough test of the 76-year-old's stamina.

In a high-octane clash with his fellow septuagenarians, the former vice president warned Sanders's plan to finance universal healthcare "gets him halfway there," while Warren has yet to indicate how hers will be paid for.

"I lay out how I can pay for it, how I can get it done, and why it's better," Biden said of his plan, which maintains and builds on the Affordable Care Act known as Obamacare.

Warren, a rising star in the race, and Sanders each put up a spirited defense of their proposals.

Sanders, whose plans advocates for a shift away from private health insurance, assured voters "we will finally make sure that every American has health care as a human right, not a privilege."

The three-way battle over healthcare kicked off a marathon debate, as 10 hopefuls scrambled for breakout moments as they vye for the right to challenge President Donald Trump.

But the candidates stood united on one key factor: ousting Trump from the White House.

"We must and will defeat Trump, the most dangerous president in the history of this country," Sanders said. "But we must do more. We must do more."

At a dinner with Republican legislators on Thursday evening, Trump quickly dropped his message of "respect" toward his opponents, which he'd expressed just three hours earlier.

He called Sanders "Crazy Bernie, he's a crazy guy." He lamented that he'd "hit Pocantonas" Warren "way too early," in reference to his mockery of the senator's controversial claim to have had Native American blood.

And he reserved his longest joke for Biden, or "Sleepy Joe."

"He's fallen asleep, he's no idea what he's doing or saying," Trump said to laughter from his party, before acting out a scene in which he imitated Chinese President Xi Jinping negotiating with Biden, with the Democrat mumbling "where am I?" and Xi telling him "sign here."

All eyes were on Biden who is battling accusations that he is a gaffe-prone candidate past his prime who could struggle during a gruelling campaign.

Biden maintains a grip on pole position with 26.8 per cent support, despite a noticeable dip in recent weeks, according to a poll average compiled by RealClearPolitics.

Sanders, at 78 the oldest candidate in the field, is narrowly ahead of Warren at 17.3 per cent support, and has largely avoided clashing with his friend and fellow progressive.

A summer of verbal miscues -- and an apparent lack of preparedness for spirited attacks by rivals in the first debate -- raised doubts about Biden's age and mental clarity, concerns he and his team have roundly dismissed.

He enjoys strong support in particular from African-American communities and from working-class whites who appreciate his blue-collar appeal and believe he is best able to beat Trump, a top priority for Democratic voters.

Warren, 70, has electrified town halls and impressed voters with her extensive collection of policy platforms.

Early Thursday she released her latest plan, one that would increase Social Security benefits for all Americans by $200 per month.

While Warren's stock has risen, the campaigns of others such as Senator Kamala Harris and 37-year-old South Bend Mayor Pete Buttigieg have stalled.

For the second tier, including ex-congressman Beto O'Rourke, senators Cory Booker and Amy Klobuchar, and Obama-era housing secretary Julian Castro -- all polling under three per cent -- a breakout moment is critical to stay relevant.

Navigating between the leaders and the strugglers is tech entrepreneur Andrew Yang, who has made establishing a universal basic income to offset job losses a key part of his campaign, and who grabbed the spotlight Thursday by promising to give a "freedom dividend" of $1,000 per month to 10 American families for a year.