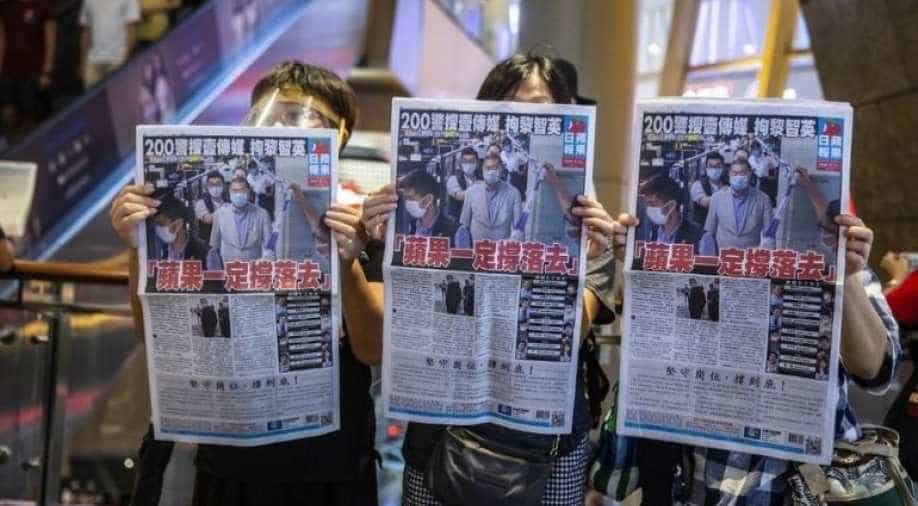 People hold up copies of the Apple Daily as they protest for press freedom inside a mall in Hong Kong on August 11, 2020, a day after authorities conducted a search of the newspaper's headquarters after the company's founder Jimmy Lai was arrested under t Photograph:( AFP )

Hong Kong media tycoon Jimmy Lai was released from police custody on Tuesday, a day after being detained under a sweeping security law imposed by China

Pro-democracy media tycoon Jimmy Lai told his staff at Apple Daily to “fight on” early on Wednesday, a day after he was released on bail. Lai was arrested under the new national security law imposed by Beijing in Hong Kong.

"Fight on! Let's fight on," Lai said in a Facebook live broadcast. "We have the support of the Hong Kong people. We can't let them down”, he said.

Hong Kong media tycoon Jimmy Lai was released from police custody on Tuesday, a day after being detained under a sweeping security law imposed by China. When Lai left a police station he was swarmed by dozens of cheering supporters, some of whom waved copies of his Apple Daily in a show of support.

Clampdown on freedom in HK

A clampdown has gathered pace in Hong Kong since China imposed a sweeping security law in June, with opposition politicians disqualified and activists arrested for social media posts.

The moves have provoked outrage in the West and fear for millions who last year took to the streets to protest communist China's tightening grip on the semi-autonomous city.

Mainland-born Lai, who was smuggled into Hong Kong on a fishing boat when he was a penniless 12-year-old, is one of the most prominent democracy activists in the city and an ardent critic of Communist Party rule in Beijing.

His arrest came amid a crackdown on the pro-democracy opposition in Hong Kong that has drawn international criticism and raised fears for freedoms promised by Beijing under a "one country, two systems" formula.

The sweeping security law imposed on June 30 punishes anything China considers secession, subversion, terrorism or collusion with foreign forces with up to life in prison.

The city's Beijing-backed government and Chinese authorities say the law is necessary to restore order after months of at times violent anti-government protests last year, sparked by fears China was slowly eroding those freedoms.

Britain said Lai's arrest was further evidence the security law was a "pretext to silence opposition", to which China's embassy replied by urging London to stop "using freedom of the press as an excuse to discredit" the law.

Hong Kong has since become another source of contention between the United States and China, whose relations were already at their most strained in years over issues including trade, the coronavirus, China's treatment of its Uighur Muslim minority and its claims in the South China Sea.